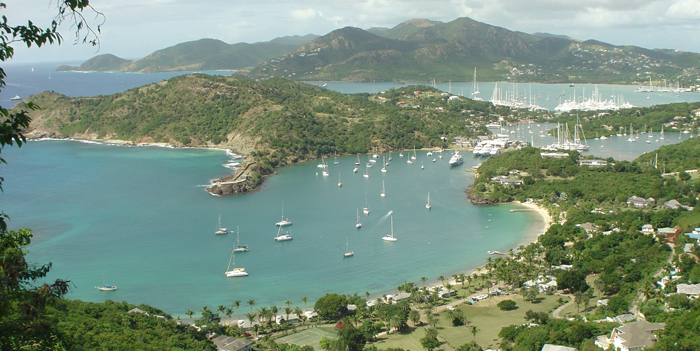 Antigua means "ancient" in Spanish and named by Christopher Columbus. Antigua has a population of 69,000. Their capital St Johns is the home of the cruise ship industry. The airport is VC Bird International airport.

English Harbor on the south-eastern coast is famed for its protected shelter during violent storms. It is the site of a restored British colonial naval station called "Nelson's Dockyard" after Captain Horatio Nelson. Today English Harbor and the neighboring village of Falmouth are internationally famous as a yachting and sailing destination with provisioning centre for all luxury mega yacht rental vessels. 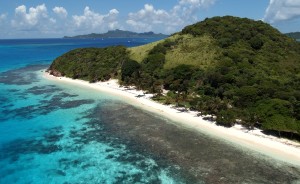 These 2 harbors host the Annual charter brokers yacht show during the first or second week of December each year. They also host the famous "Antigua week" at the end of April, which is a world-class regatta bringing sailors from all over the world to have fun competing together. Immediately after the Antigua boat week sailors wanting to sail home to the Mediterranean leave in flotilla form to cross the Atlantic.

Christopher Codrington guided development on Antigua as a profitable sugar colony. For a large portion of Antigua history, the island was considered Britain's "Gateway to the Caribbean". It was located on the major sailing routes among the region's resource-rich colonies. Lord Horatio Nelson, a major figure in Antigua history, arrived in the late 18th century to preserve the island's commercial shipping prowess.

According to A Brief History of the Caribbean, European and African diseases, malnutrition and slavery eventually destroyed the vast majority of the Caribbean's native population. No researcher has conclusively proven any of these causes as the real reason for the destruction of West Indian natives.

In fact, some historians believe that the psychological stress of slavery may also have played a part in the massive number of native deaths while in servitude. Others believe that the reportedly abundant, but starchy, low-protein diet may have contributed to severe malnutrition of the "Indians" who were used to a diet fortified with protein from sea-life.

Sugar became Antigua's main crop from about 1674, when Christopher Codrington settled at Betty’s Hope Estate. He came from Barbados, bringing the latest sugar technology with him. Betty's Hope, Antigua's first full-scale sugar plantation, was so successful that other planters turned from tobacco to sugar. This resulted in their importing tens of thousands of slaves, as sugar cultivation and processing was labor intensive.

According to A Brief History of the Caribbean, many West Indian colonists initially tried to use Indians and whites as slaves. Unfortunately, these groups succumbed easily to disease and/or malnutrition, and died by the thousands. The African slaves had the misfortune of adapting well to the new environment; and thus became the number one choice of "unpaid labor." In fact, the slaves thrived physically and also provided medical services, and skilled labor, such as carpentry for their slave masters.

Today, collectors prize the uniquely designed "colonial" furniture created by West Indian slaves. Many of these works feature what are now considered "traditional" motifs, such as pineapples, fish and stylized serpents.

Horatio Nelson, 1st Viscount Nelson, was Senior Naval Officer of the Leeward Islands from 1784 to 1787 on H.M.S. Boreas. During his tenure, he tried to enforce the Navigation Acts. These acts prohibited trade with the newly formed United States of America. Most of the merchants in Antigua depended upon American trade, so many of them despised Lord Nelson. As a result, he was unable to get a promotion for some time after his stint on the island.

The Americans were at this time trading with Antigua and Barbuda, taking advantage to register of their ships, which had been issued while they were British subjects. Nelson knew that, by the Navigation Act, no foreigners, directly or indirectly, are permitted to carry on any trade with these possessions.

A dockyard started in 1725, to provide a base for a squadron of British ships whose main function was to patrol West Indies and thus maintain Britain's sea power, was later named "Nelson's Dockyard" in his honor.

In 1967, with Barbuda, and the tiny island of Redonda as independencies, Antigua became an associated state of the Commonwealth, and in 1981 it was disassociated from Britain. The country was then led by what many describe as an elected family dynasty, with Vere C. Bird, the first prime minister, having been succeeded in 1993 by Lester B. Bird, his son, who retained the post until 2004.

The anchorages of Antigua.