Power Yacht Charters in the Caribbean are mostly centered around the Virgin Islands. The British Virgin Islands are a magical Caribbean archipelago of more than forty islands and cays. They seem to have been created expressly for the pleasures of power yachts and water sports. The islands are located about 60 miles east of Puerto Rico. The British Virgin Islands feature rugged mountain peaks rising from the blue Caribbean Sea. Many of these islands are uninhabited and attainable only by your power yacht giving many opportunities for undisturbed pleasures and comfort.
Top 10 Caribbean power  YachtsAll Caribbean Power Yachts

Whilst the British and US Virgin Islands are the focal point of power yacht charters, the wider Caribbean is littered with a host of beautiful and unique islands for your power yacht charter. From  the Virgin Islands to St Maarten in the Leeward Islands to St. Lucia, Grenada and the Grenadines in the Windward islands. These Caribbean locations all provide their own unique experiences but on your power yacht, you will be sure to have a wonderful vacation wherever your itinerary takes you. 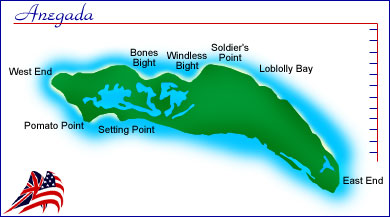 Anegada is the destination for those who want to be by themselves. It is the only coral island of the entire chain (the others being volcanic) and has the third largest barrier reef in the world. On old charts it was called "the drowned island". In fact Anegada in Spanish means sunken island. At it's highest point, it is only 28 feet above sea level. The area has long been a source of confusion to sailors, who were unaware of the shifting currents. More than three hundred ships have been wrecked off this sleepy island. The north shore is one non stop beach along which you can walk for miles without encountering another soul. On the south side there are quaint restaurants where, if you have a hankering for fresh lobster, you may feast on a catch by prior arrangement. The sail to and from Anegada is a sailors delight.

The Beach Club is the main attraction here on Cooper Island, nestled in between the palm trees on Manchioneel Bay. It has  a relaxed atmosphere and is one of the popular haunts for visiting yachtsmen. It is an ideal spot to go ashore and stretch your legs after a busy day of diving on the wreck of the Rhone.

Another attraction here is the abundance of dive sites and great snorkeling opportunities. Many believe that it has some of the best snorkeling in the islands. 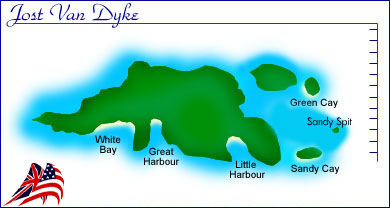 Jost Van Dyke (named after a Dutch pirate) is the Western most island. It's highest peak rises to 1,070 feet giving an all embracing vista of the harbors of this serene wonderland. The largest settlement is at Great Harbor, which is famous for Foxy's beach bar, one of the most popular spots in the world for New Year's Eve.

Sandy Cay is one of the smallest islands to the west of Tortola. With it's natural botanical gardens,  sweeping panoramic views and long white beaches, is a tiny pearl  in the ocean. Laurence Rockefeller donated the island to the British Government as a national park, with the proviso that it stay in it's native state.

Aside from being everyone's idea of the perfect tropical island, Sandy Spit has good snorkeling and is a fair anchorage and is every photographers' fantasy. 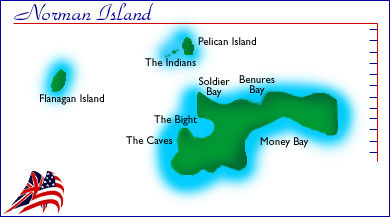 A seafaring uncle once described Norman Island and its treasure caves, so graphically to Robert Louis Stevenson that he was inspired to write "Treasure Island".  Many years later Brian Henson, son of the late Jim Henson, directed the filming the Muppet version of "Treasure Island" after having sailed the islands with his family on Wanderlust.

The other main attraction here is the notorious William Thornton, a floating bar restaurant in the guise of a pirate ship. 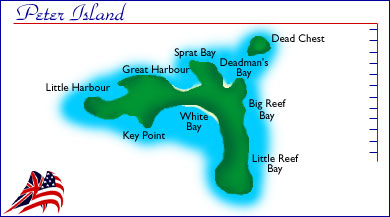 Laying between Tortola and Norman Island, is Peter Island. Like Norman Island, Peter has several anchorages for varying interests. Deadman's Bay on the North Side and White Bay to the South offer two of the prettiest palm fringed beached in the islands. Great Harbor is a calm secluded anchorage which is ideal for water sports. The prestigious Peter Island Yacht Club is located between Great Harbor and Deadman's Bay.

Deadman's Bay looks out on a small island, Dead Chest. Teach, the pirate also called Blackbeard, evidently marooned some of his men on Dead Chest to teach them discipline or survival. They were given only a single cutlass and a bottle of rum. Legend has it that this is the origin of the song "Yo Ho Ho and a Bottle of Rum." Legend also has it that the fifteen men killed each other.

In former times Salt Island supplied  the salt for the British Navy's Caribbean fleet from it's salt ponds. Although belonging to the crown the island and it's salt ponds were operated by the local populace. Even today it's occupants harvest the salt, you will find it for sale both on the island and in local stores. Each year they pay their token tithe to the queen - one sack of salt.

A great tragedy occurred in 1867 on the rocks of Salt Island, when the Royal Mail Ship Rhone sank in a storm, taking 125 persons with her. Its remains are extensive and have become a fascinating underwater habitat for marine life. It is part of the national park system and is rated the most popular wreck dive in the Caribbean by numerous dive publications. 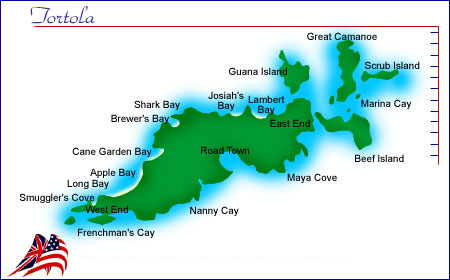 Tortola, the Turtle Dove, is the largest island despite its mere 21 square miles. The capital of the BVI's is Road Town, with its numerous marinas, hotels, thriving ships chandeliers and boatyards, it is a buzz with social activity.

It is six miles from Road Town to West End. There you will find a protected harbor for your private yacht, bordered by typically flamboyant architecture, known as Sopers Hole. This is one of the hot spots for shopping, dining and entertainment for the yachting community. It is also an ideal place to anchor when going to the infamous Bomba's Shack full moon party (see 1999 Sports Illustrated Swimsuit Edition).

The peaks of Sage Mountain dominate the west side of the island. The area is a natural rain forest which is preserved as a national park for the enjoyment of hikers and future generations. The lookout platform at the summit affords a superb panoramic view.

On the largely undeveloped north side of the islands there are many natural and historical sites of beauty and interest.  Cane Garden Bay, the subject of many postcards has a white palm               fringed beach stretching the entire length of the bay. The Callwood Rum Distillery is housed there in a musty stone building dating back to slavery. Arundel rum in old and new bottles line the shelves. Also to be seen are the copper boiling vats, the old still and the cane crusher.

Brewers Bay is without question one of the most beautiful anchorages in the Virgin Islands. Fortunately it is seldom used by visiting yachtsmen owing to the extensive coral formations which make access to the anchorage difficult for the novice. While the snorkeling here is excellent, time should also be taken to explore ashore. For those interested in taking a short walk, there are the ruins      of Tortola's only remaining windmill on the slopes of Mount Healthy.  The entire north shore is scattered with numerous beaches and coves, many of which are unknown to the visiting yachtsman. 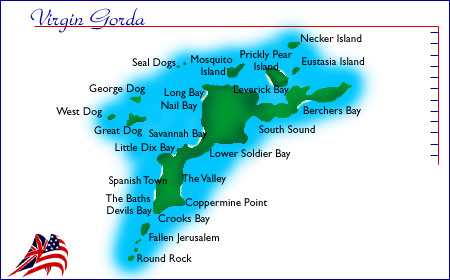 Virgin Gorda, the fat virgin, is the second largest and perhaps one of the most interesting of the British Virgins. The island was once the capital and is now the home of Little Dix Bay, the luxury resort built by Laurence Rockefeller. The island is approximately 10 miles long with high peaks in the northern and central areas. All land over 1,000 feet high on Virgin Gorda has been designated National Parks land to preserve its natural beauty.

Spanish Town, the original capital, is still the major settlement on the island. Although opinions vary it is commonly thought that Spanish Town is so called for the number of Spanish settlers, who      came to work in the copper mines in the early 16th century. The mines were still working until 1867, and the ruins at Copper Mine Point are still visible today.

Virgin Gorda Yacht Harbor is located in Spanish Town and is the hub of shopping and boating activity on the south end of the island. Dock your private yacht and you will find there an active night life and you can take your pick of entertainments, from steel bands through to night clubs.

The Baths, are a batholithic formation of enormous smooth granite boulders creating deep caverns and vaulted rooms. They are washed by the tides and floored with warm natural pools. One can wander, climb and crawl amongst the rocks for hours, sometimes becoming quite lost.

The Baths are thought to have evolved when a layer of molten granite was forced gradually to the earth's surface, solidifying as it moved. Those parts of the rock that were less solid were affected by the harshness of the sea and weather and eventually fell away from the harder segments, thus leaving the irregularly curved passages and smoothly pocked walls. Many of the boulders, encrusted with coral rise up out of the sea, creating a paradise for both snorkelers and sea life.