At Barrington Hall we provide motor yacht charters around the world on various luxury yachts. The Motor Yacht listed below, DOPAMINE, is one of the many motor yachts we offer for charter. Please contact us for up to date information on DOPAMINE or any other yachts in your desired location. 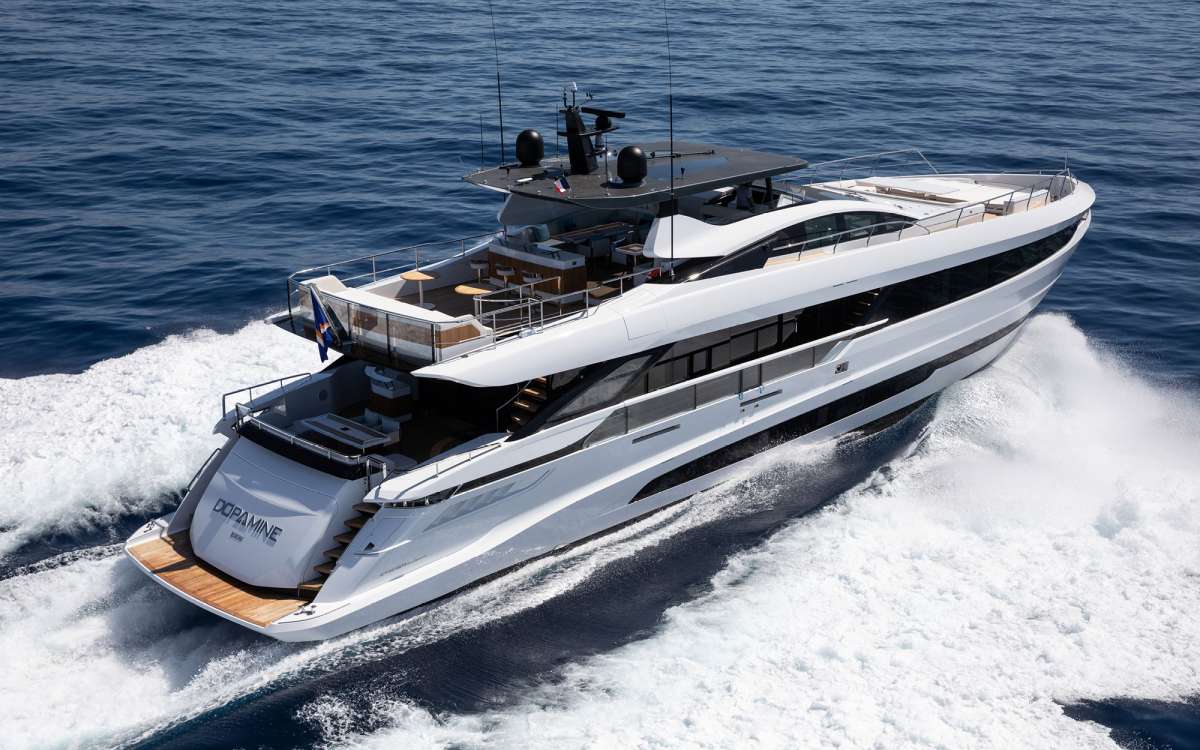 Floor to ceiling windows and doors surround the main deck salon allowing guests to feel as if they are outside while protected indoors when needed. The formal dining seats 8 guests while the aft and flybridge dining, in true al fresco style will seat more, especially lending shade cover overhead as well. In addition to the lounge area on the flybrdge aft combined with high top bar, guests have an equally as large al fresco dining, sunning and Jacuzzi area forward with shade option.

On deck Master Stateroom forward with a large walk in shower with steam feature. Long concealed hanging closets for guests.
Below deck are 4 guests staterooms. There are two Queen and two Twin. Each Twin stateroom converts if desired to Queen/ custom double beds for 5 couples. All are en suite with showers. Sealux easy touch controls for all lighting in each cabin.

Easy access to the water and toys from the swim platform with beautiful step entrance escalading down. 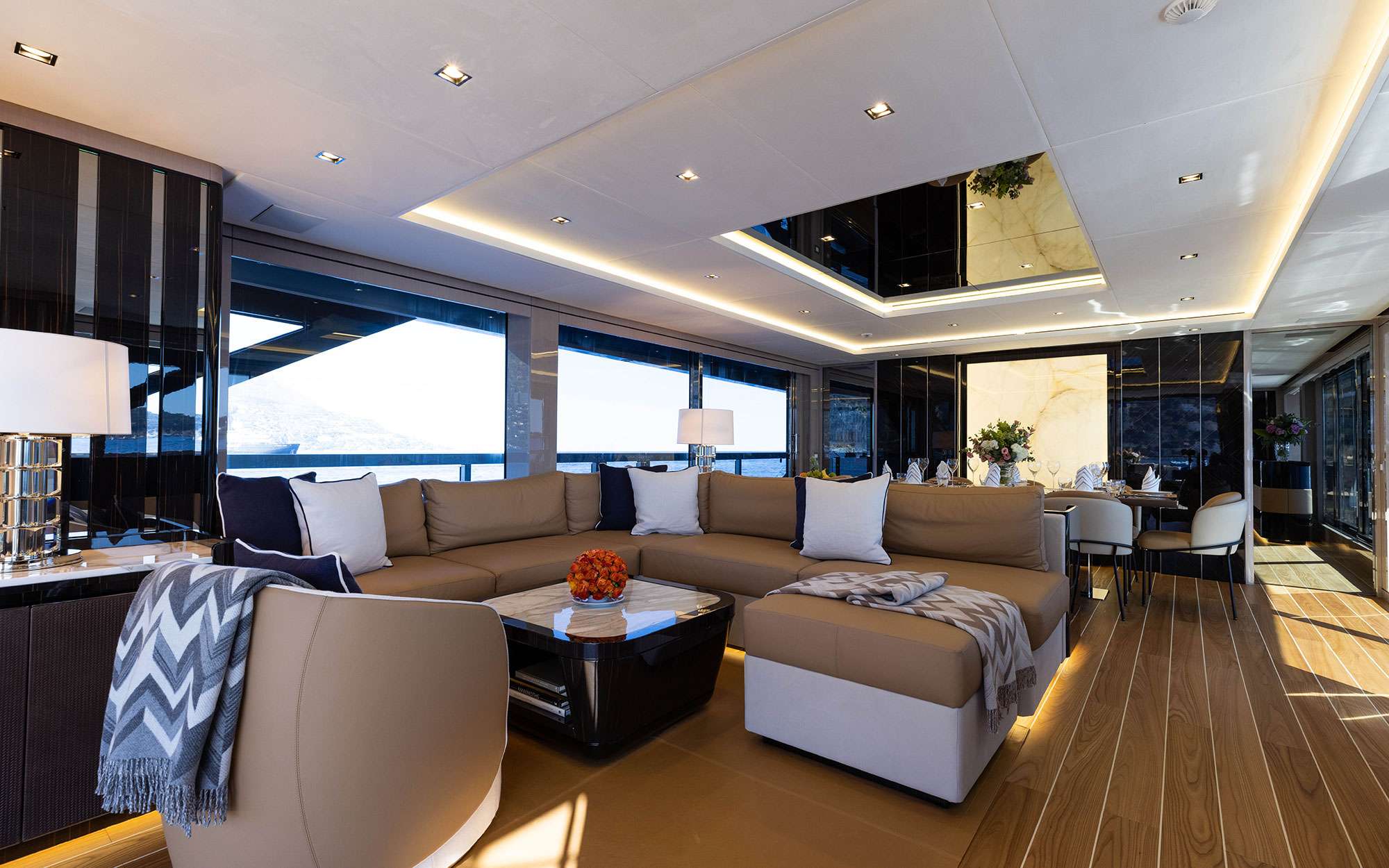 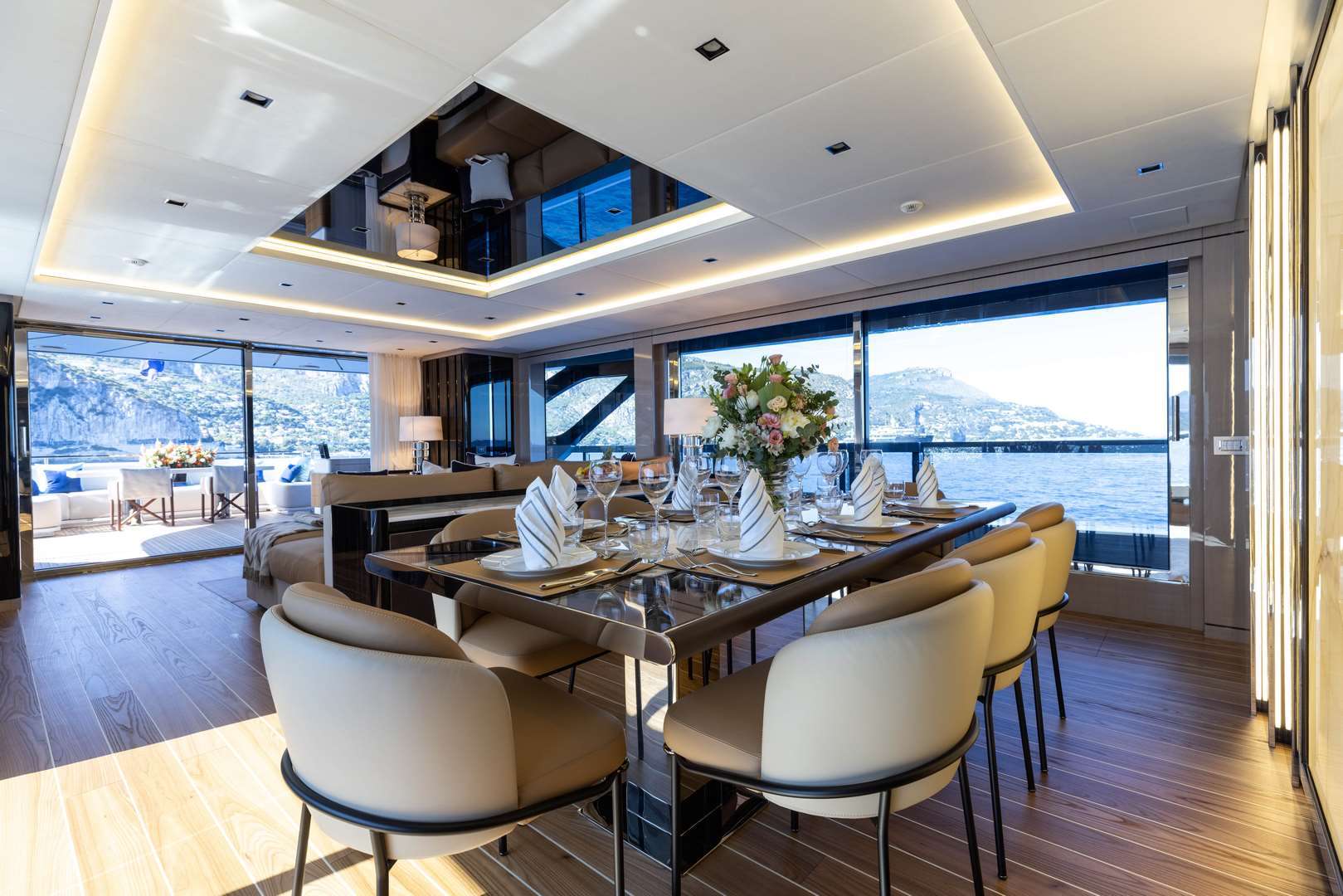 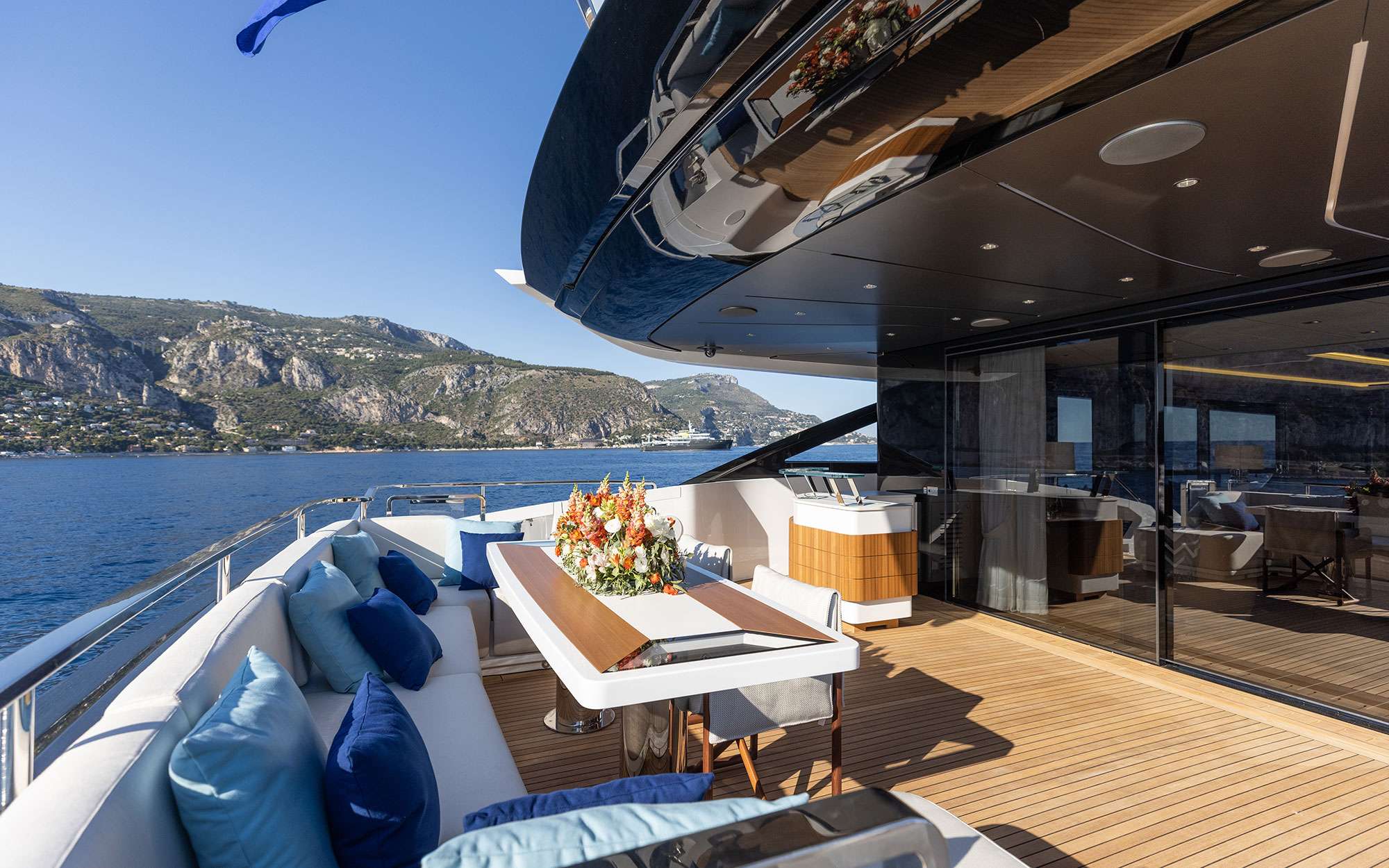 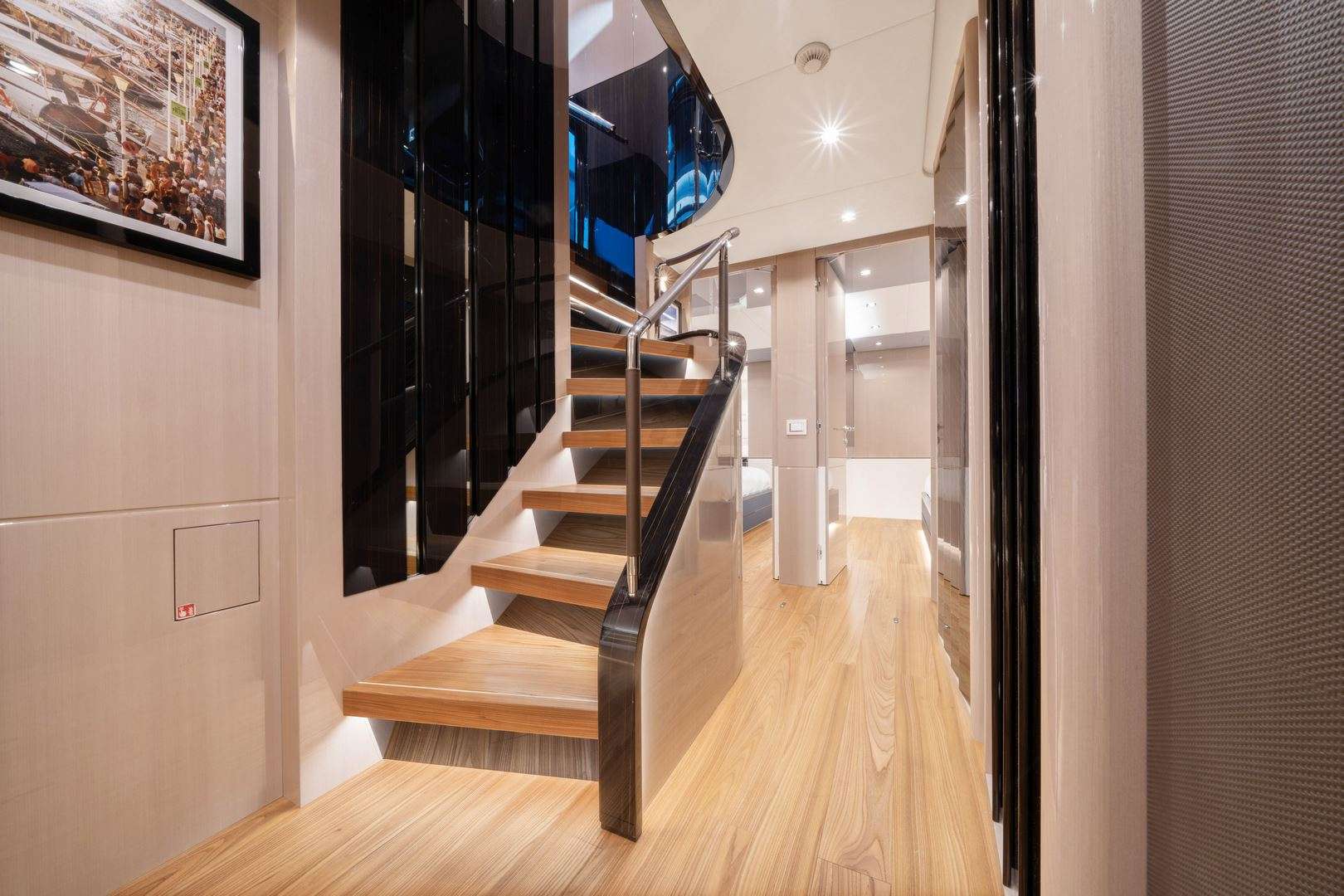 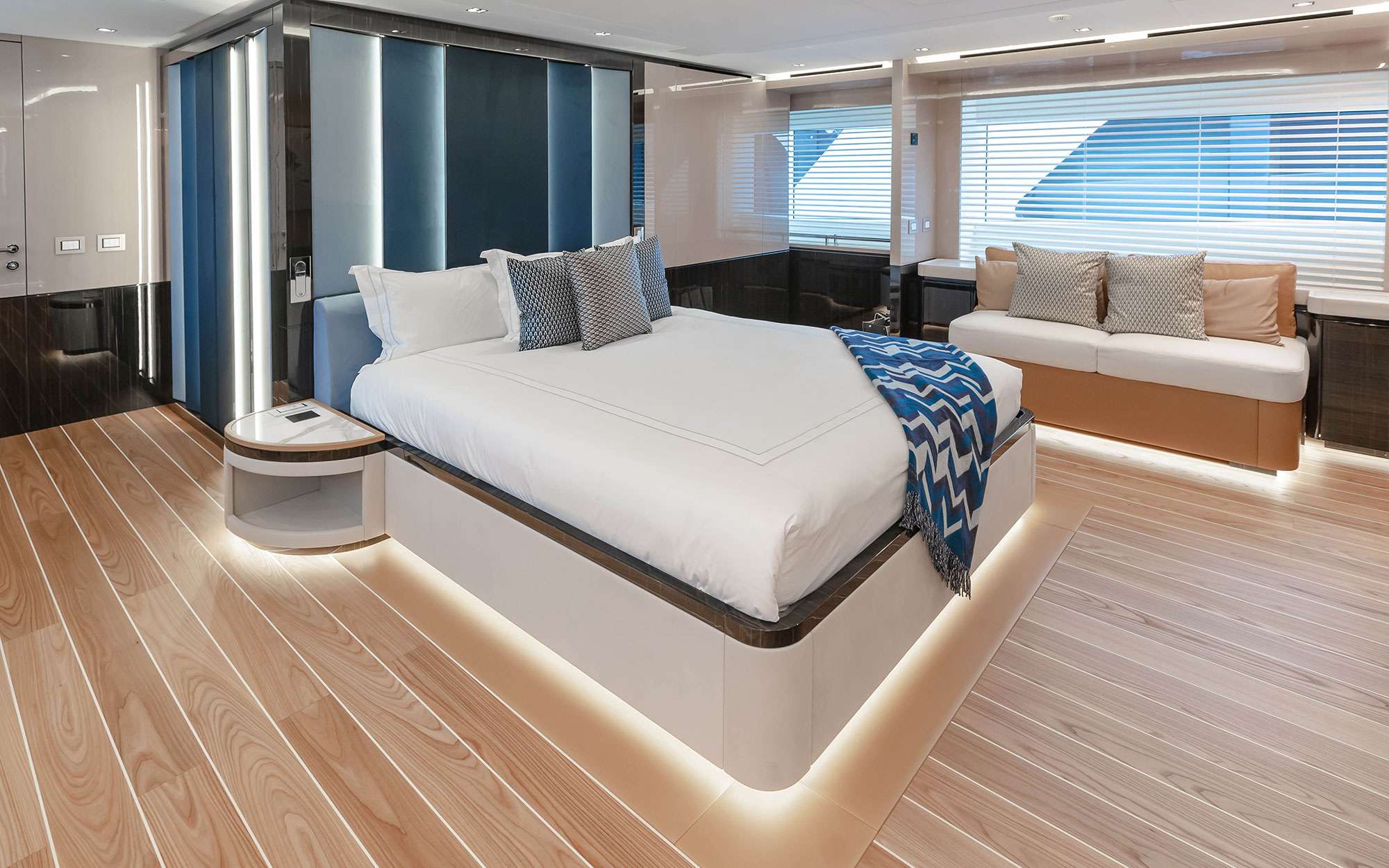 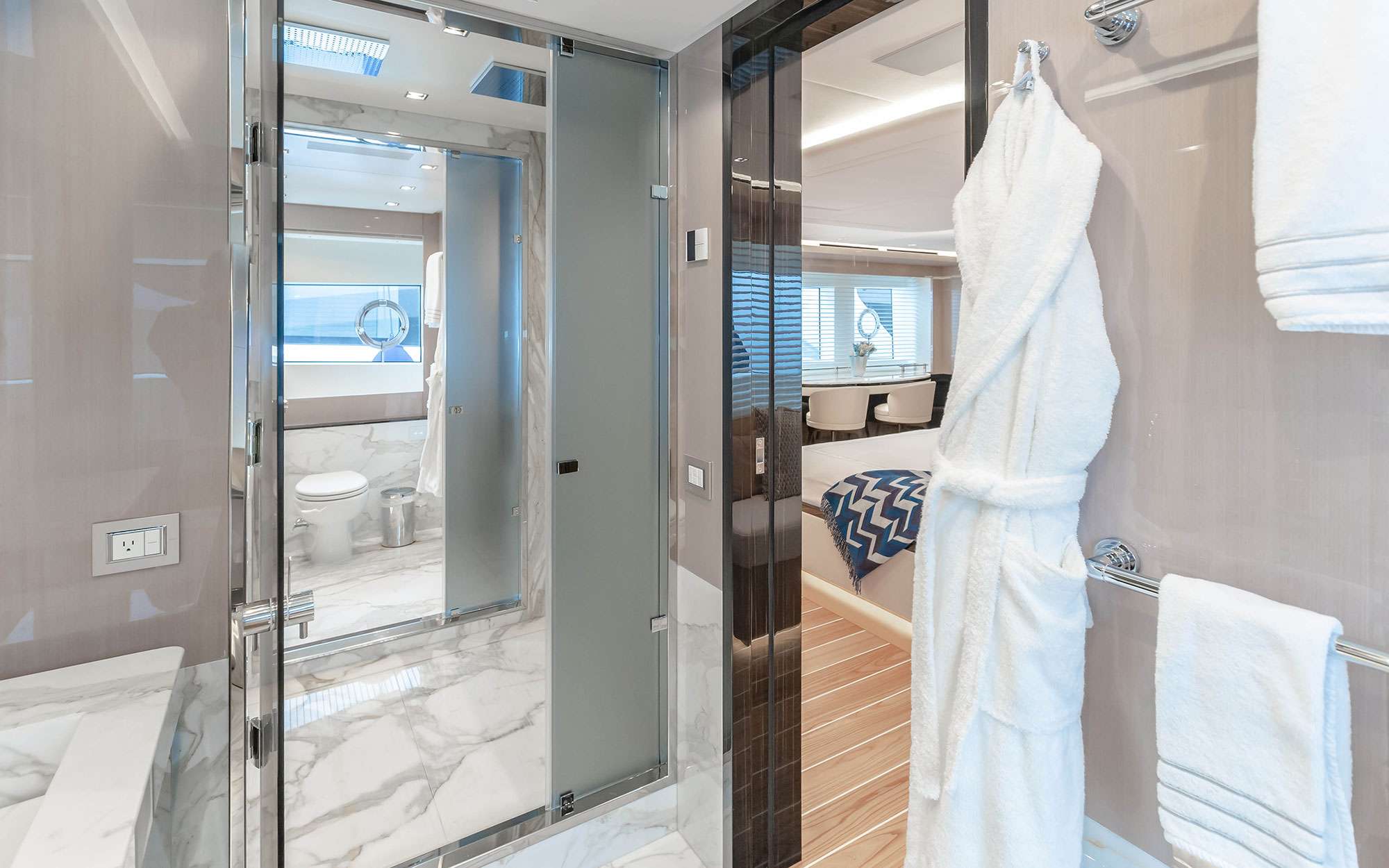 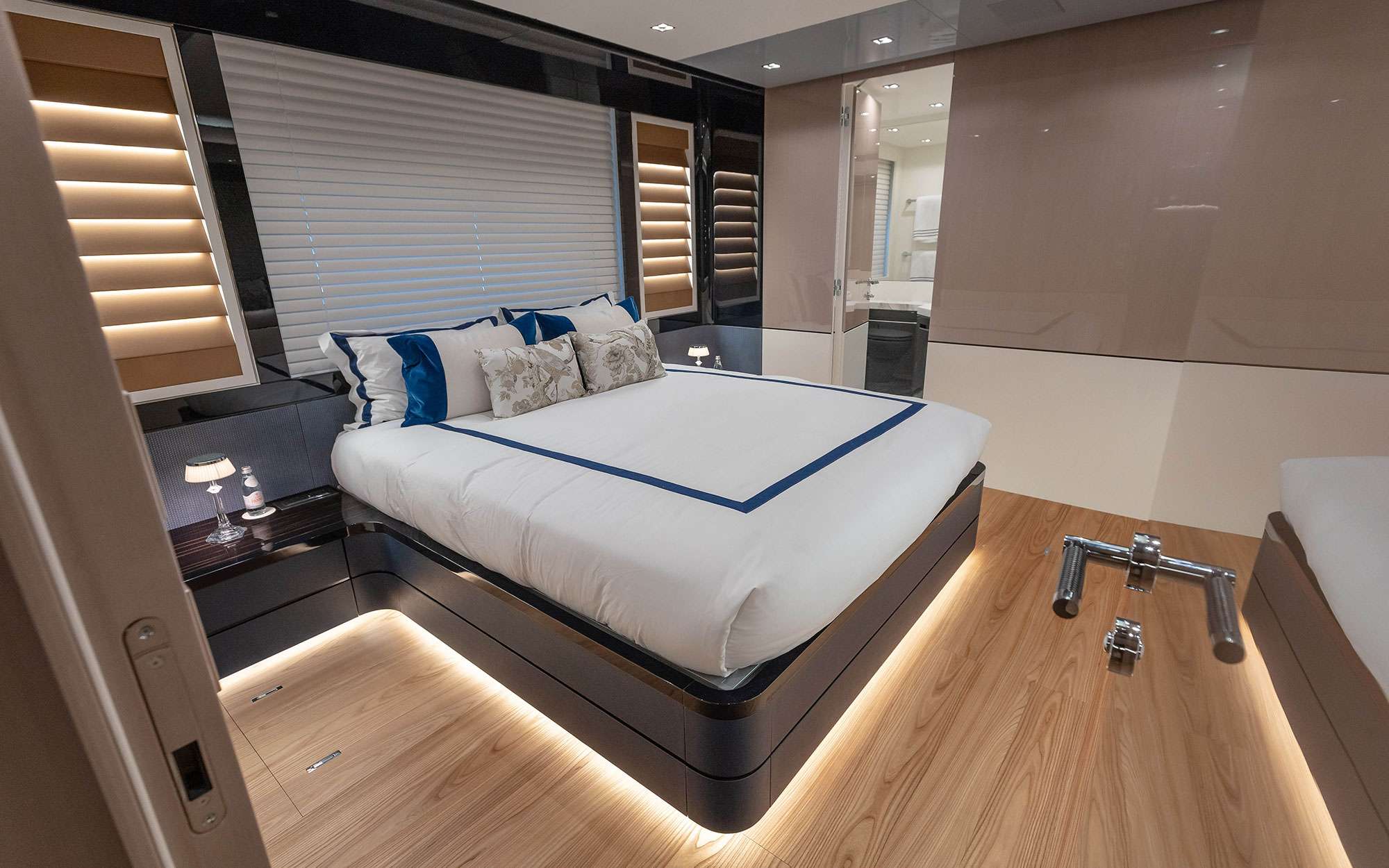 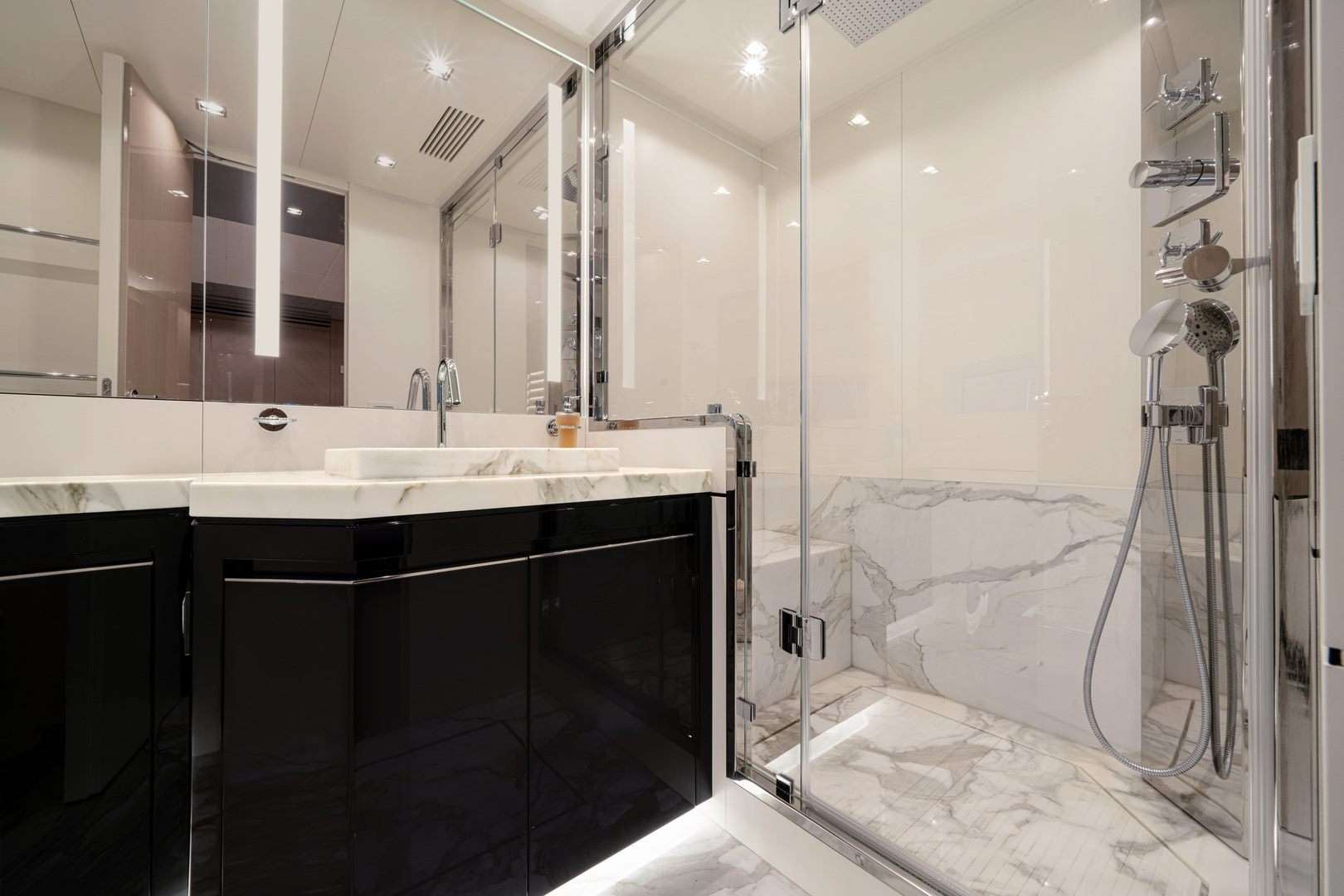 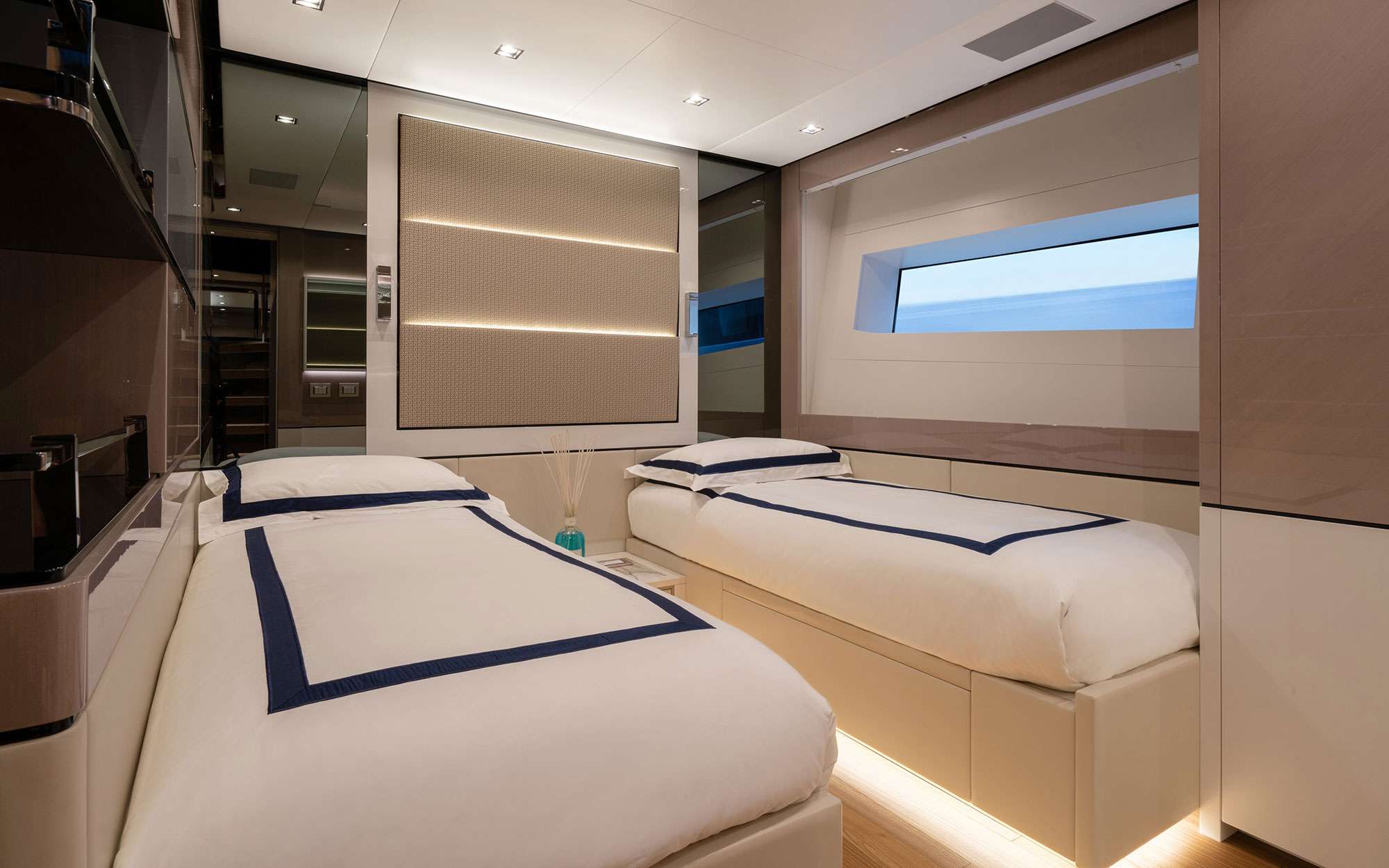 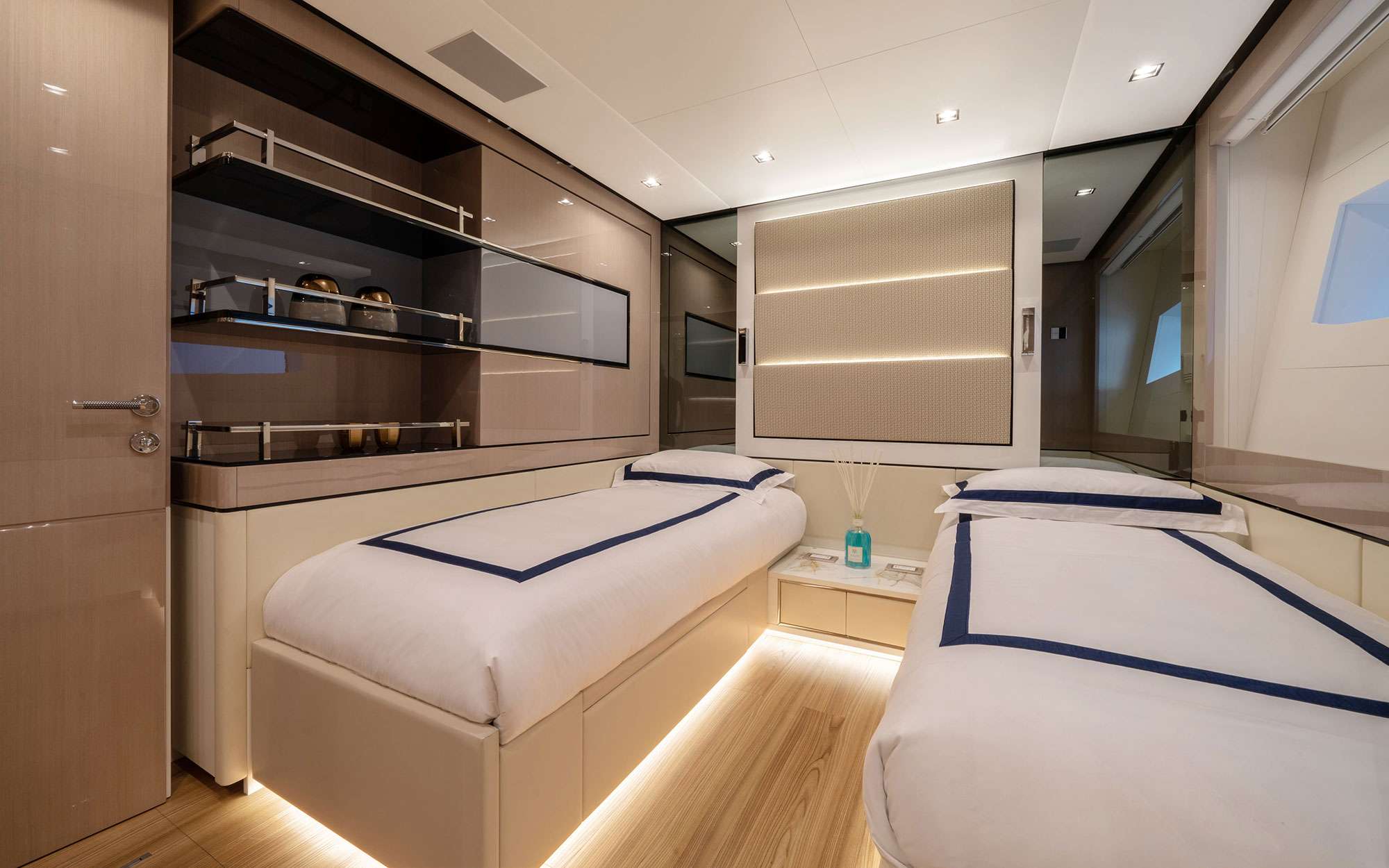 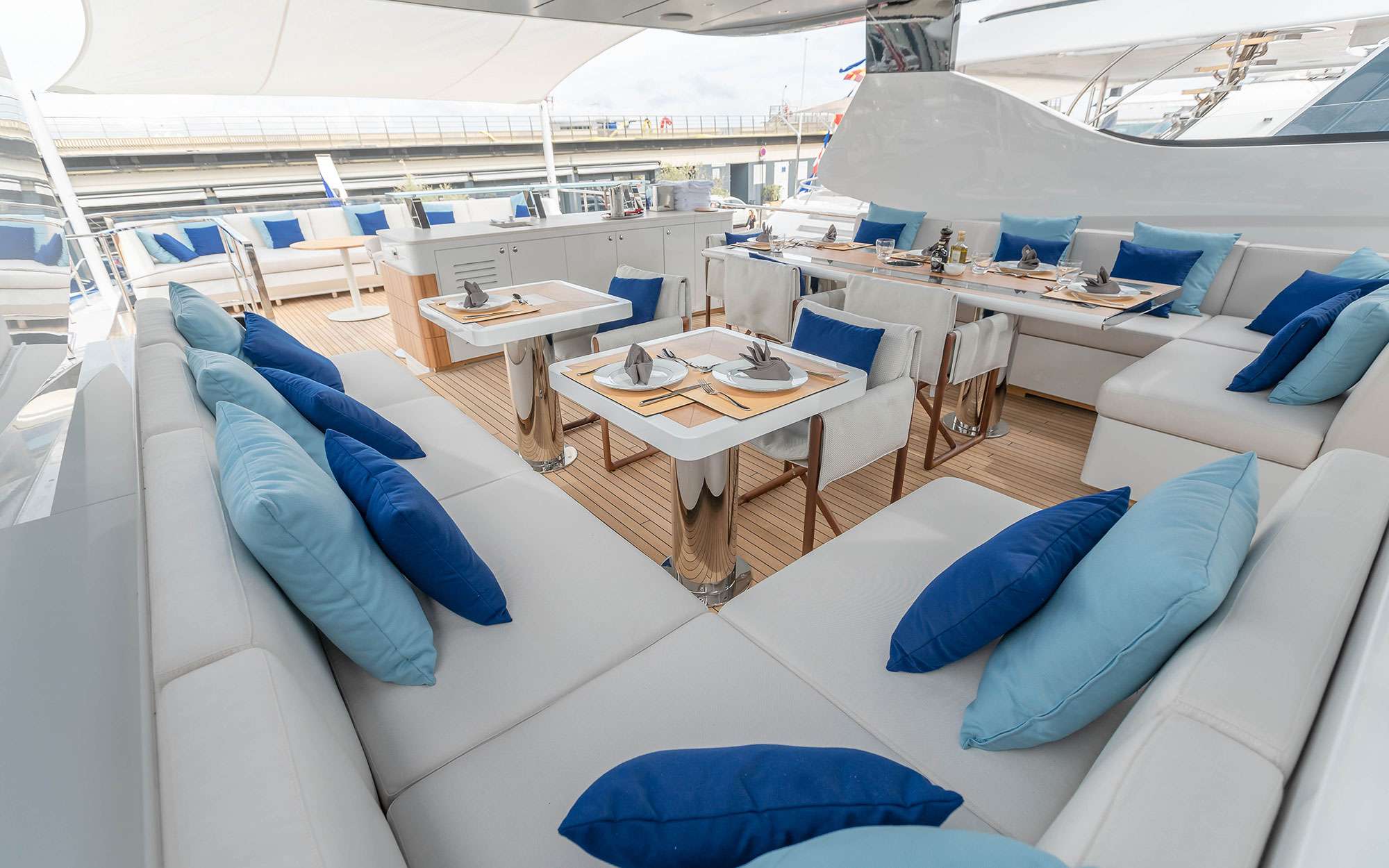 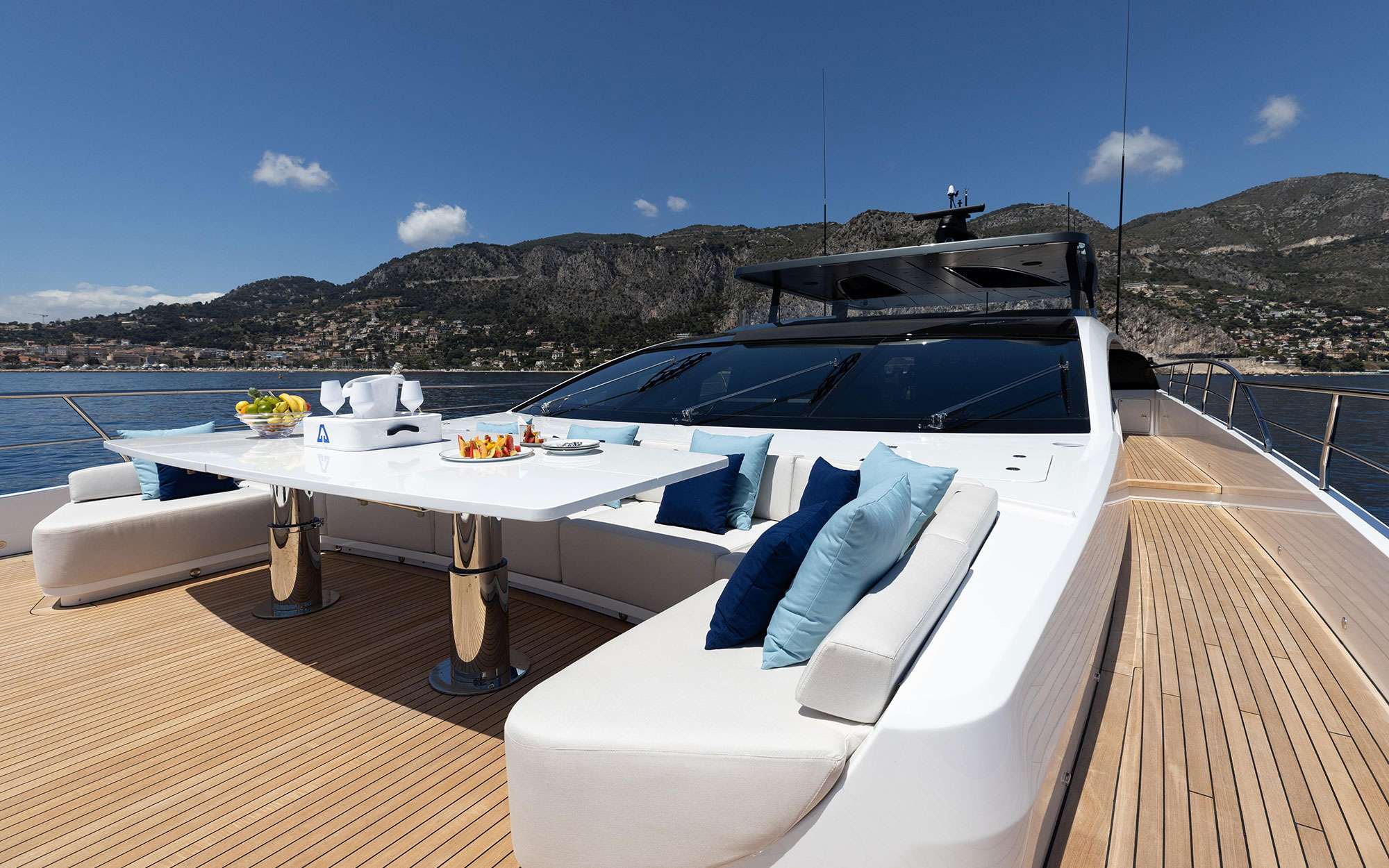 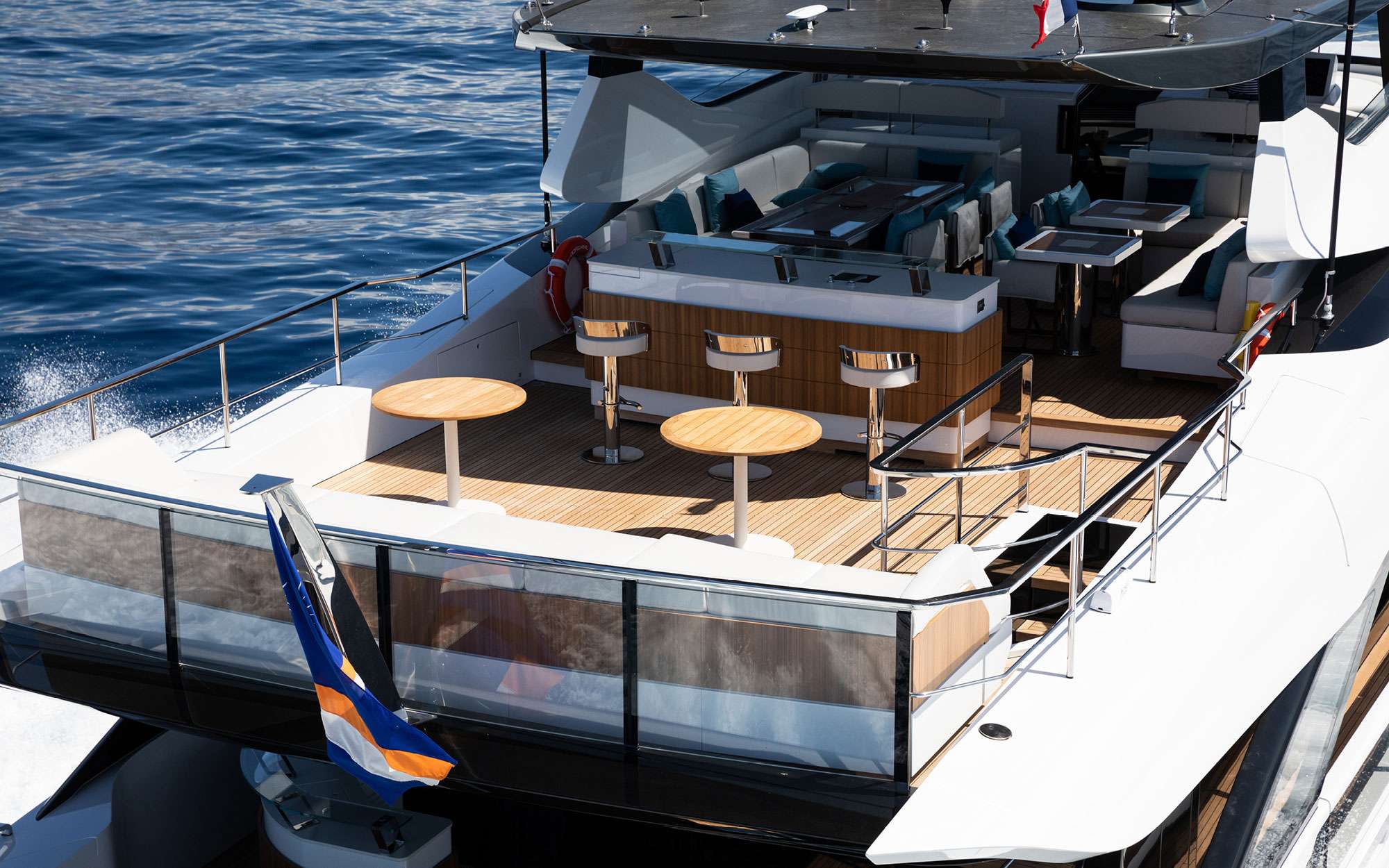 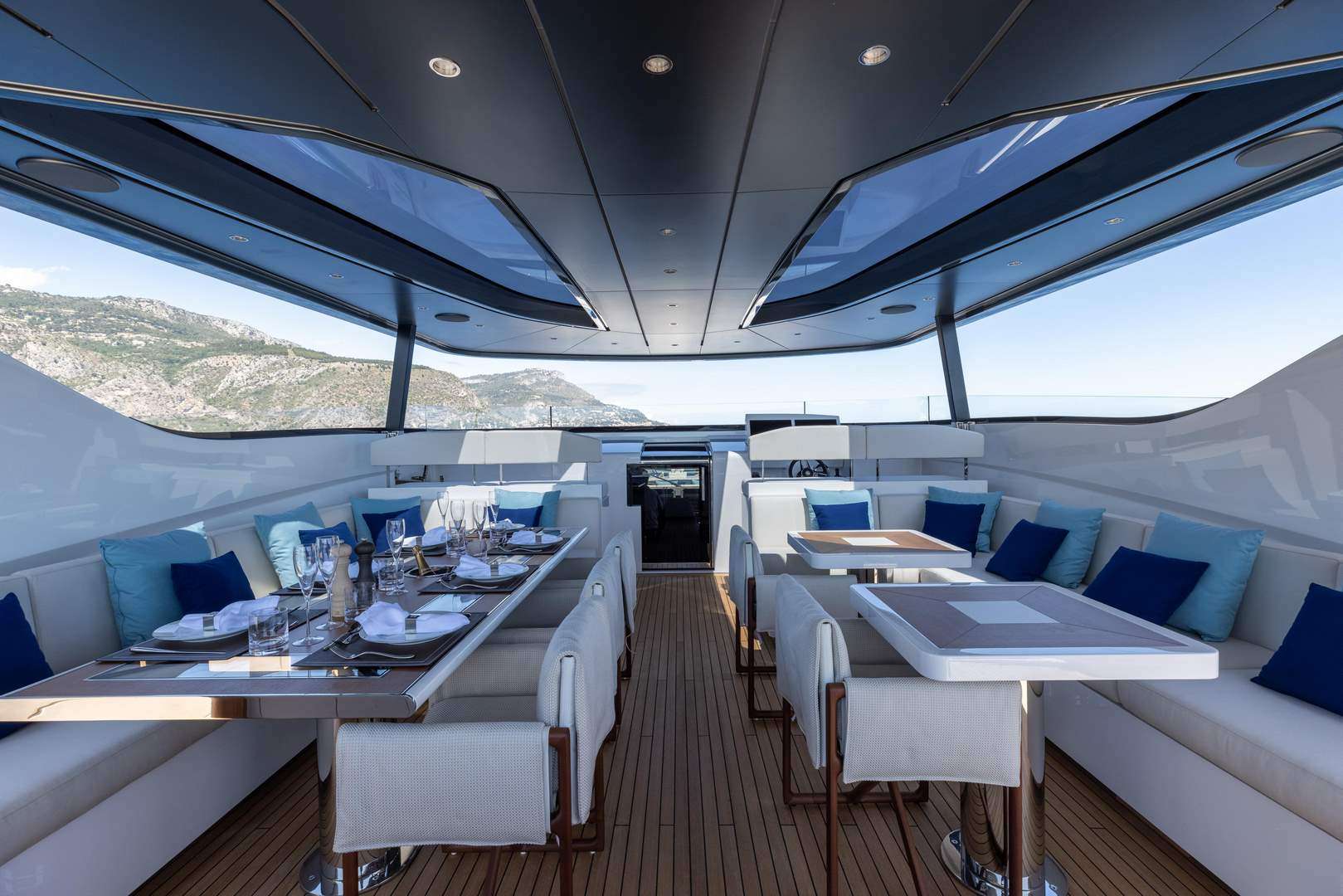 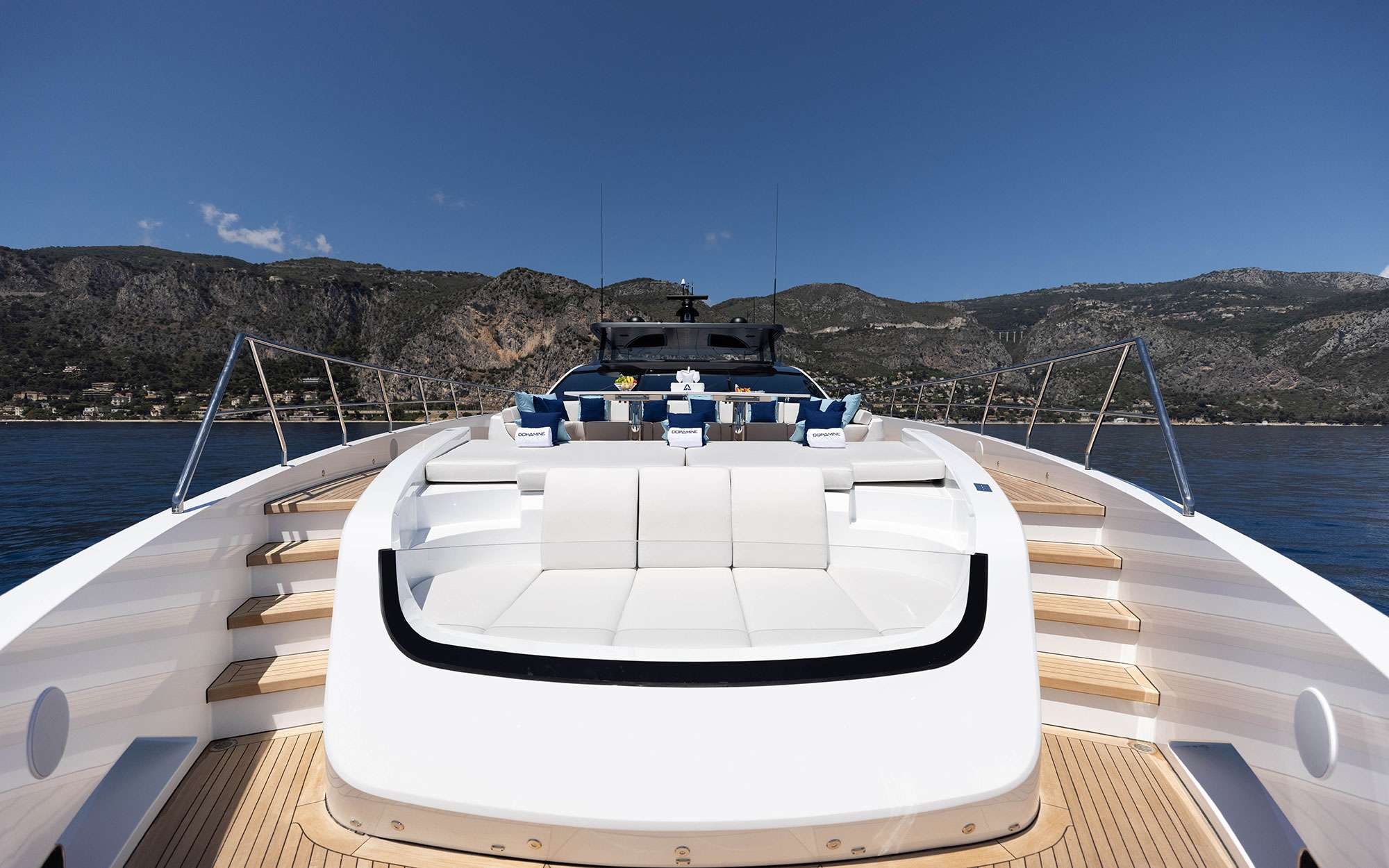 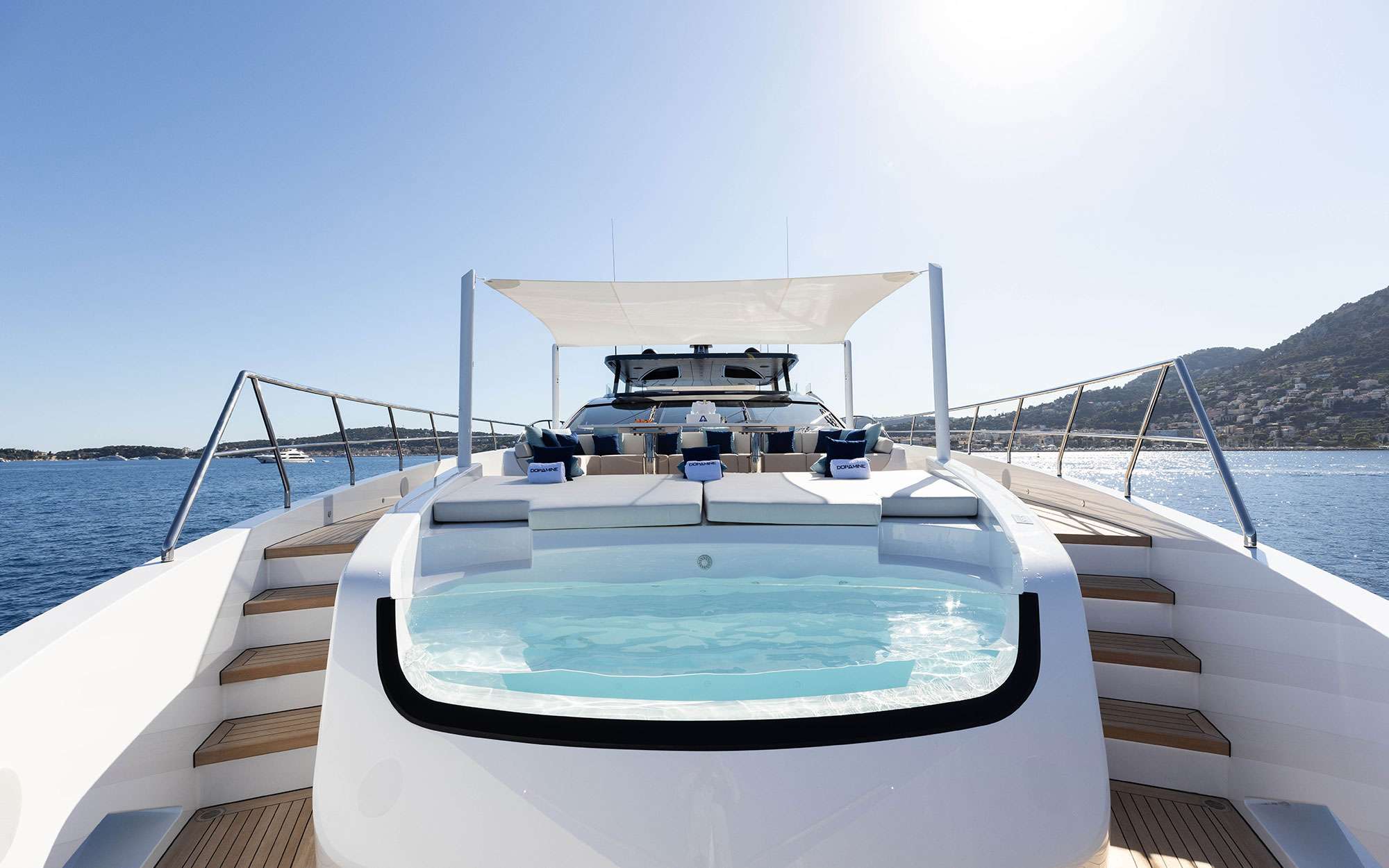 Warren was born in Zimbabwe and at the age of 7 moved to Kenya, then onto Swaziland, Mozambique, South Africa and finally back to Zimbabwe to finish his schooling. He attended the University of Cape Town where he got his bachelor's degree in Human Resources Management. After graduation, Warren moved to Thailand for 3 years where he became a Corporate English teacher, a Dive instructor, and a fire-dancer! He then returned to South Africa, started his sailing courses, and headed on a 7-week cross-Atlantic journey to America aboard a 44ft catamaran. Here is where he began his career working on Super Yachts.

Over the years, Warren continued to advance his qualifications until he acquired a Chief Mate position, before returning home to follow in his father’s footsteps and complete his Master’s in Business Administration. During these years, he worked as a Resort Manager in Mozambique - excelling in his diving and hospitality career. After 3 successful years in the corporate sector, Warren decided to return to his passion and complete his Master 3000 Captains ticket where he has finally found his true calling.

Dylan was brought up in South Africa where is passion for the ocean and all things yachting was first ignited. The allure of working on the sea and travelling the world drew Dylan to the super yachting industry at a young age.
With a career spanning over a decade he has progressed his way up through the ranks, dedicating his down time towards training and career development.
Safety and guest satisfaction are at the forefront of Dylan’s priorities and encourages this culture amongst the crew. When Dylan has free time, he enjoys leading an active lifestyle and can be found outdoors fly fishing a back country river in New Zealand or under water exploring a shipwreck in Indonesia. He looks forward to welcoming you onboard and helping to create many unforgettable memories

Our French chef, Anthony, has a fantastic 12-year food background. He started off his career as a French crepe maker working his way to traditional, fine dining and Michelin star restaurants. During his travels he got experience working with many famous chefs such as Christophe Bacquié, Stéphanie Le Quellec and Gordon Ramsay.

For the last five years, Anthony has been a dedicated team leader and acquired a great reputation in both luxury establishments and private industry. He now showcases his culinary skills on super yachts. Being an open-minded person, Anthony appreciates the intimacy of being a yacht chef as he can see his food being enjoyed firsthand. When he isn’t cooking up a storm in the Galley, you will find Anthony wandering local markets and enjoying great local food. Traveling globally, discovering new cultures, and the pleasure to please is what inspires his instinctive cuisine.

Bart grew up in Durban South Africa with a love for the ocean and a passion for sailing, surfing, surf lifesaving, triathlons, and water polo. When he finished his studies, he chose to travel the world and explore new and different cultures. With his passion for water-polo combined with his love for teaching he ran a children’s water sports academy.
After that he joined the corporate world and after almost successful 2 years, he decided that life had more to offer and that was where his career in yachting took off!
It wasn’t long before Bart knew had made the right decision. His enthusiasm for the oceans shines bright which lead to his imminent success in the industry. Bart has been part of some world class programs and his studies in the maritime industry has led him to achieve his Chief Mates ticket. It won’t be long before he reaches his ultimate goal of being a captain himself.

Adam was born and raised in Cape Town, South Africa. When Adam was seven, he and his family moved to New Zealand and thereafter onto Wales, UK and finally back to South Africa. Adam has studied mechatronic engineering, and computer programming and more recently completed his entry-level tickets for the yachting industry. He worked in Spain on various motor and sailing yachts in a deck and engineering capacity, where he had the opportunity to explore the Mediterranean. Following that he took some time off and moved to Costa Rica to explore and experience the country's beauty and focus on one of his passions, photography. It was then that he decided to move to Zanzibar in Tanzania to soak up the island life. Adam thrives on the ocean where he can use his engineering skills as well as satisfy his lust for exploration.
Motor Yacht Charters, By BHC
2805 East Oakland Park Boulevard #397
Fort Lauderdale,  Florida,  33306
Local Phone: 954-720-0475
Tollfree: 800-478-2029