At Barrington Hall we provide motor yacht charters around the world on various luxury yachts. The Motor Yacht listed below, AMICA MEA, is one of the many motor yachts we offer for charter. Please contact us for up to date information on AMICA MEA or any other yachts in your desired location. 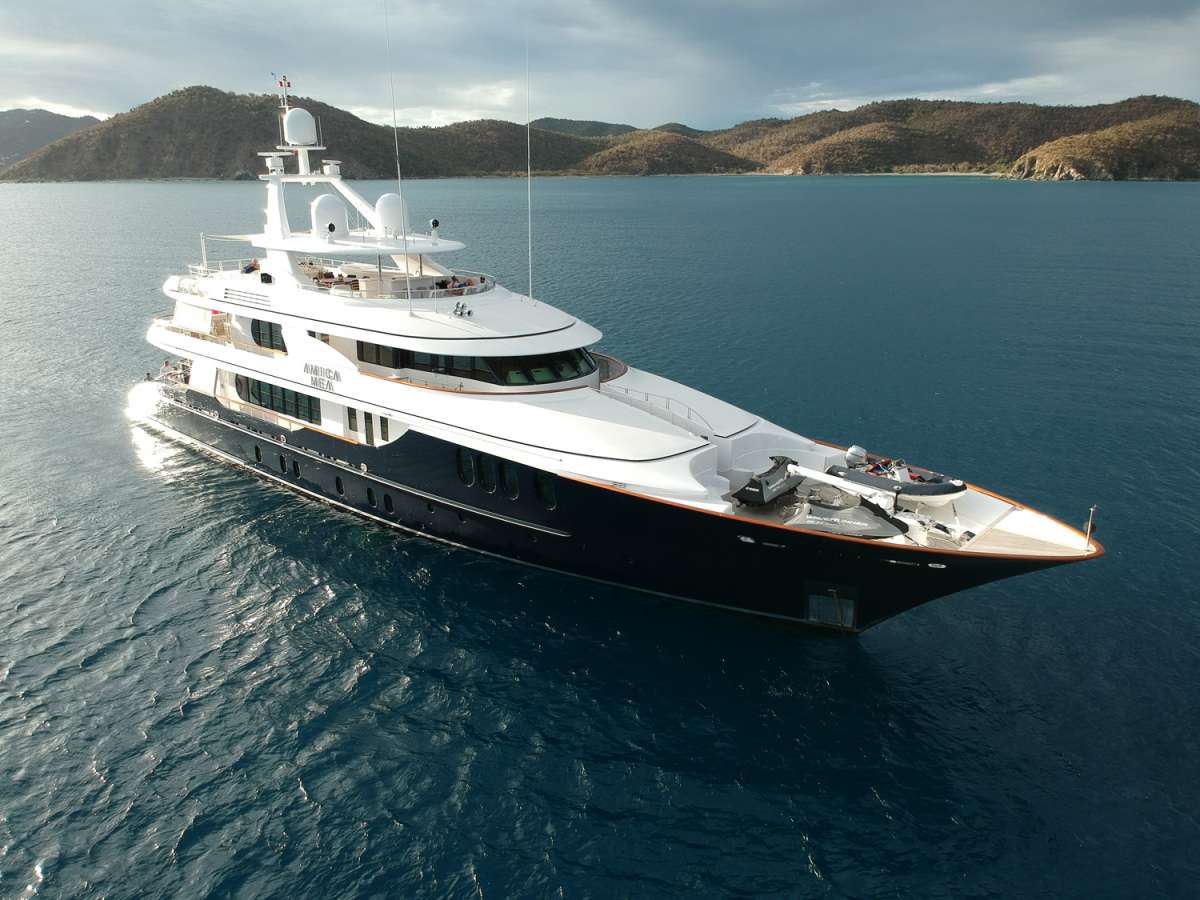 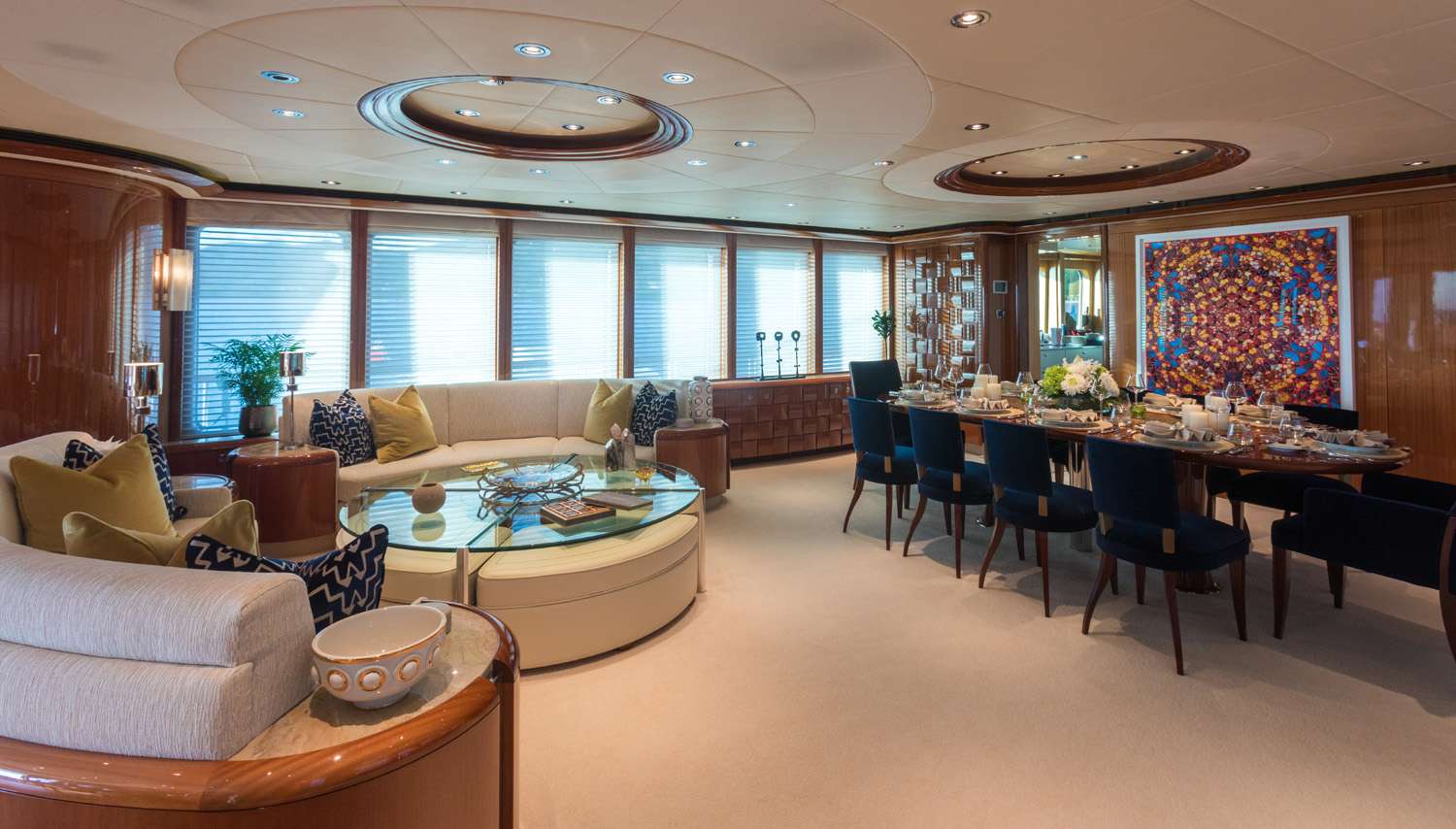 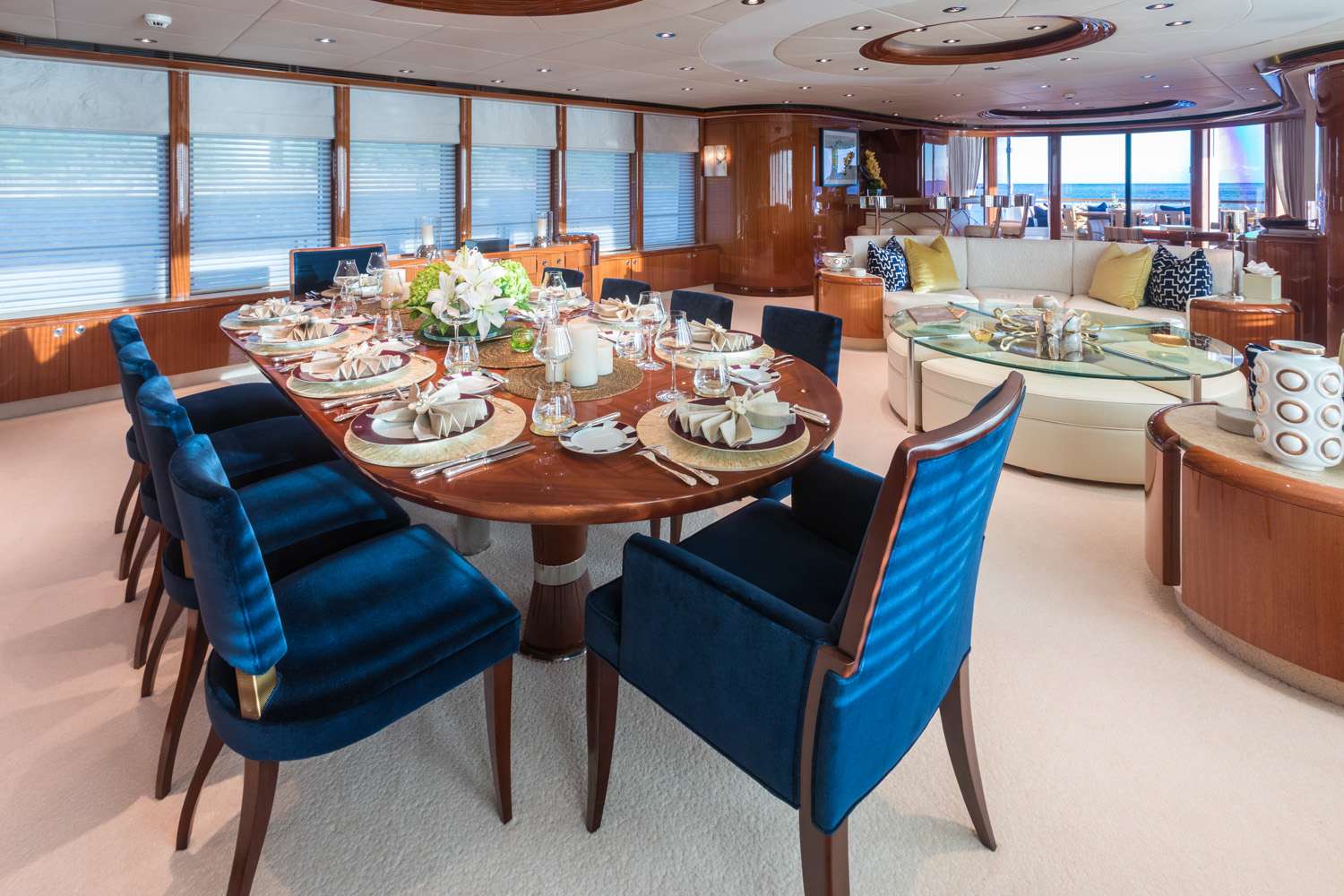 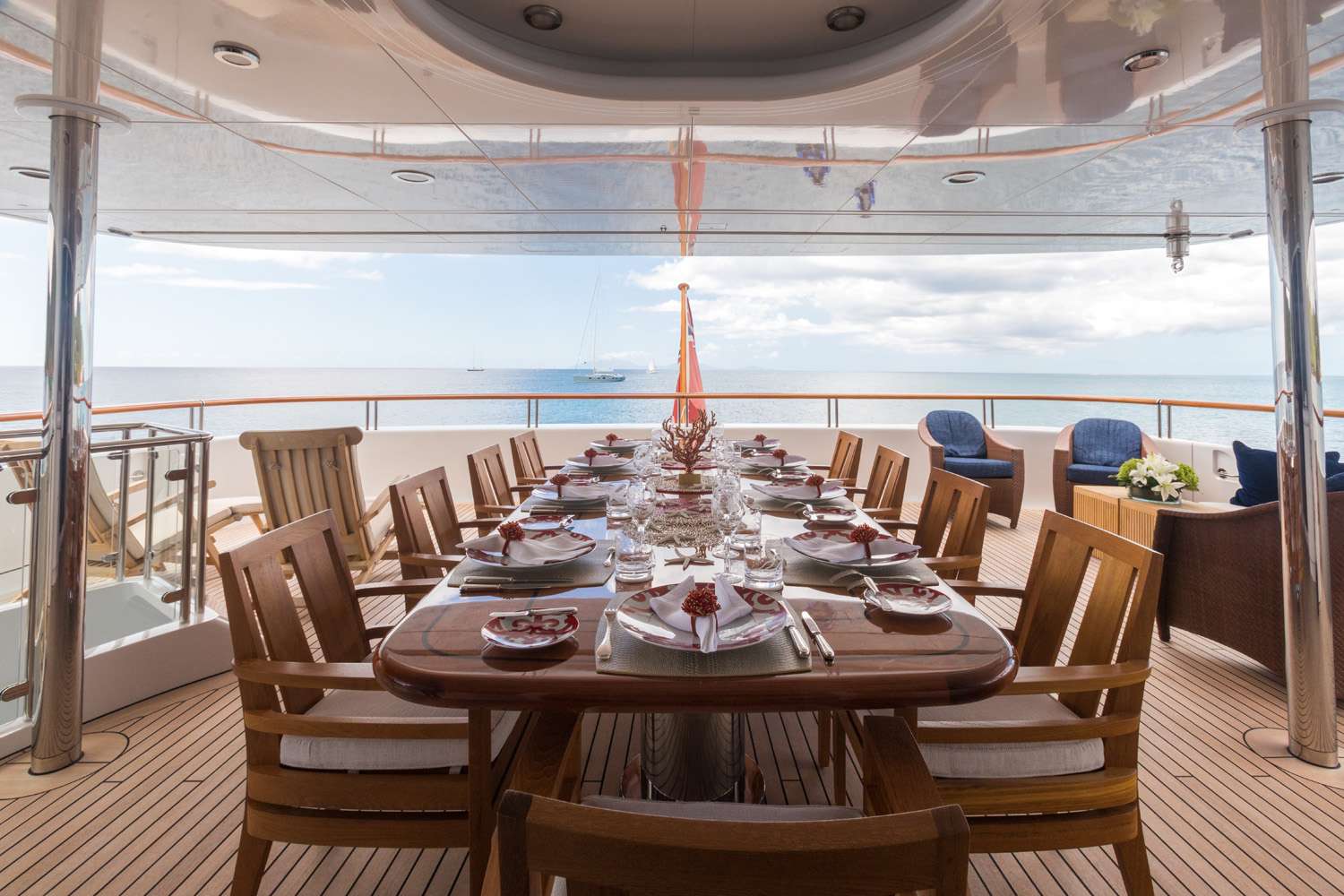 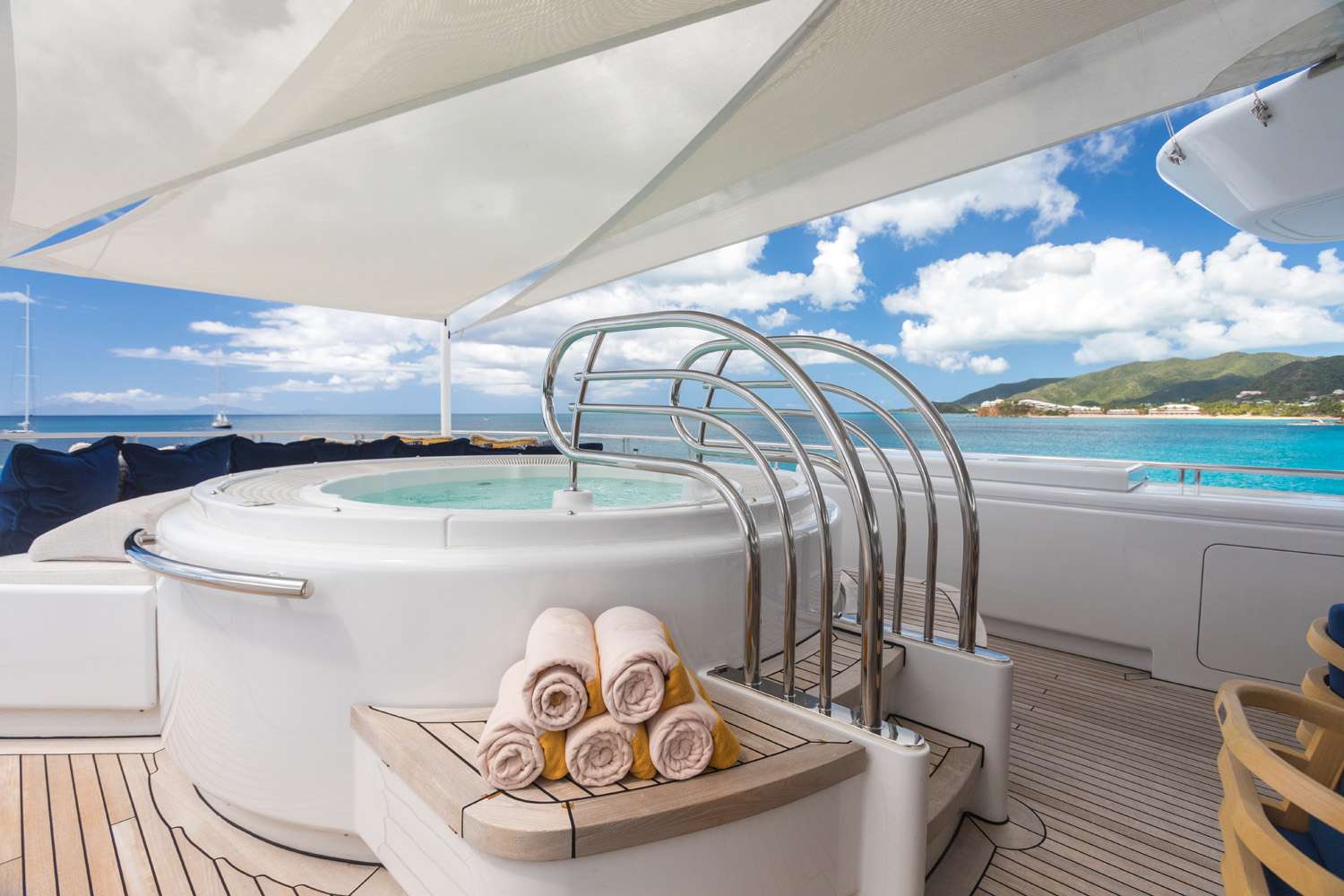 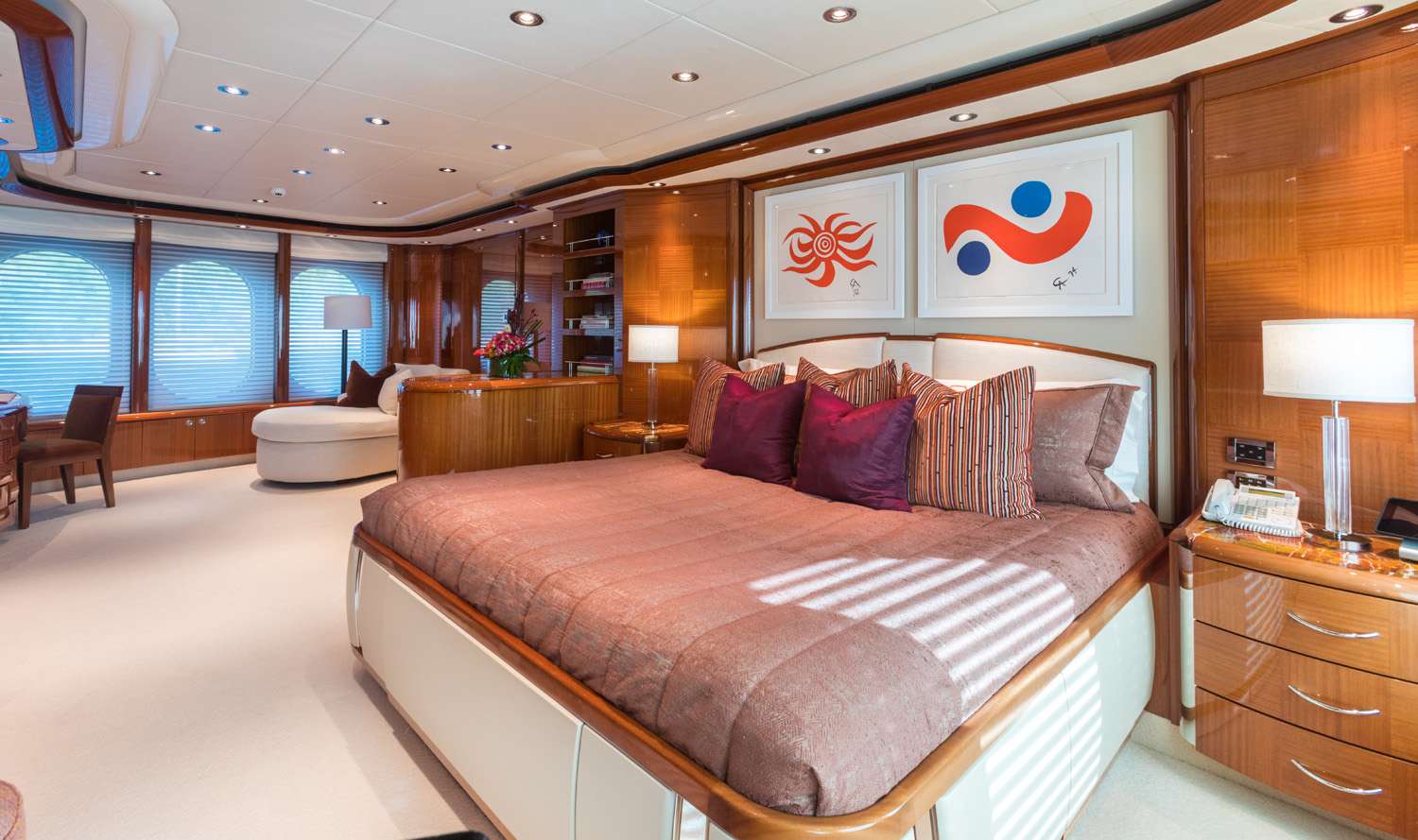 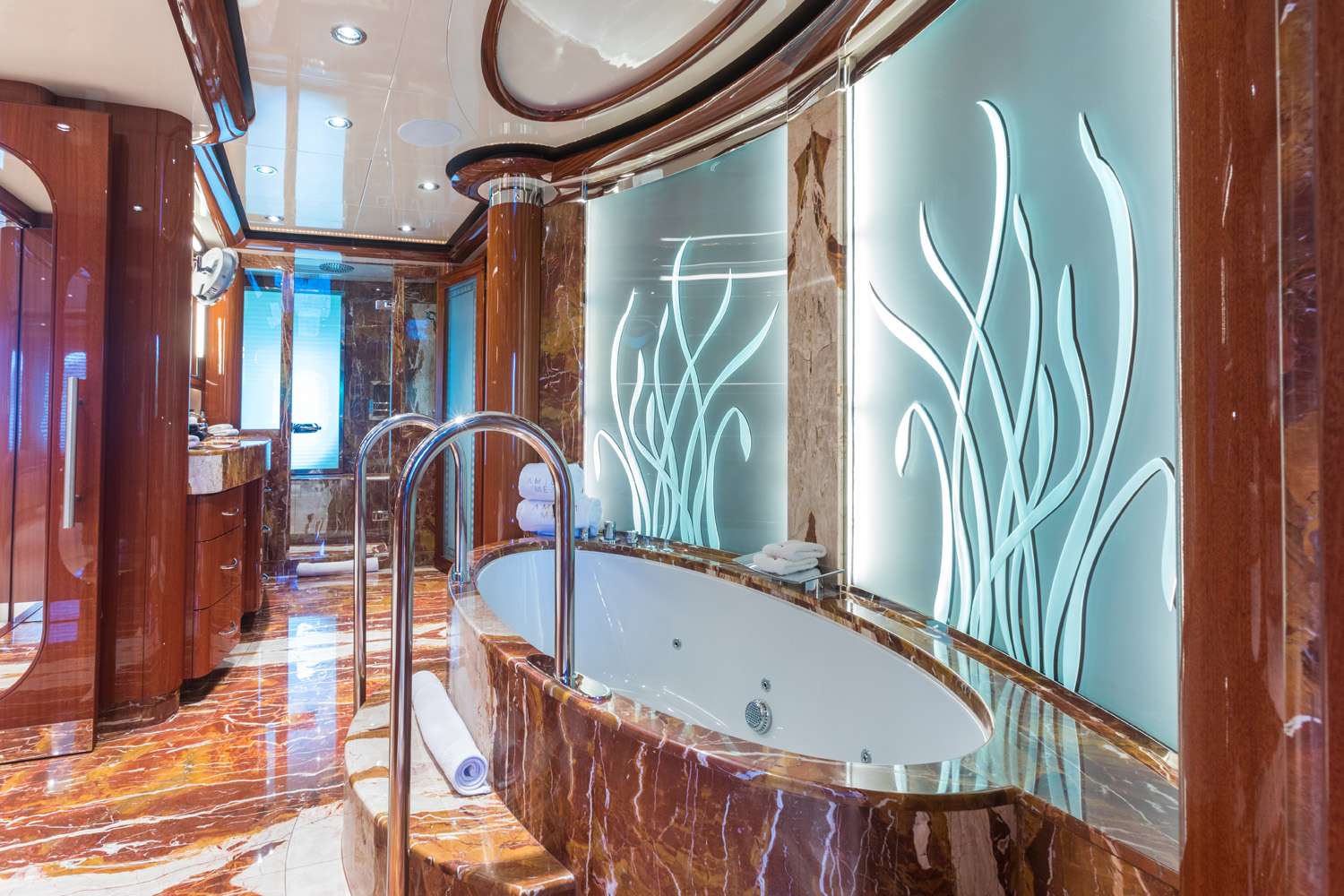 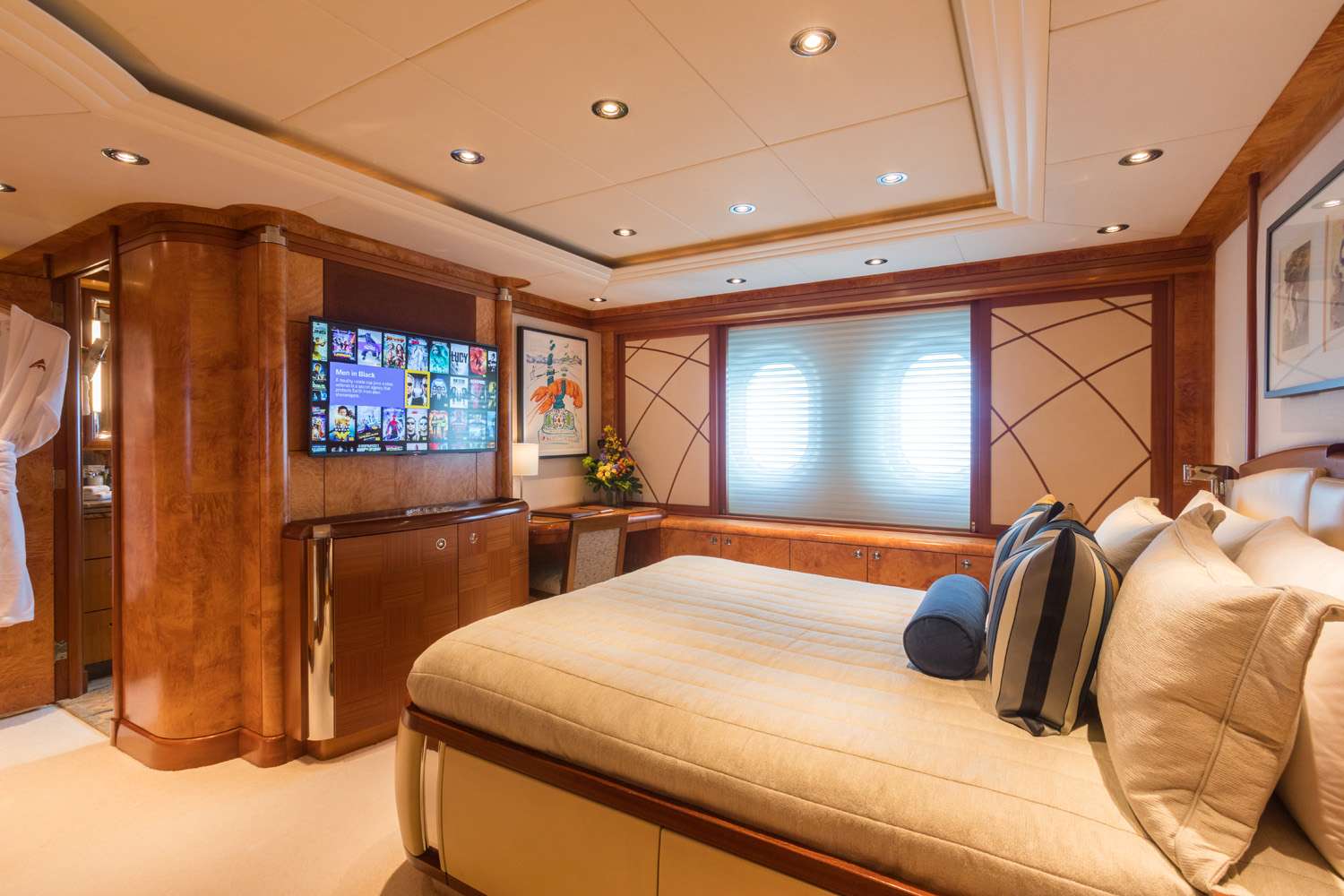 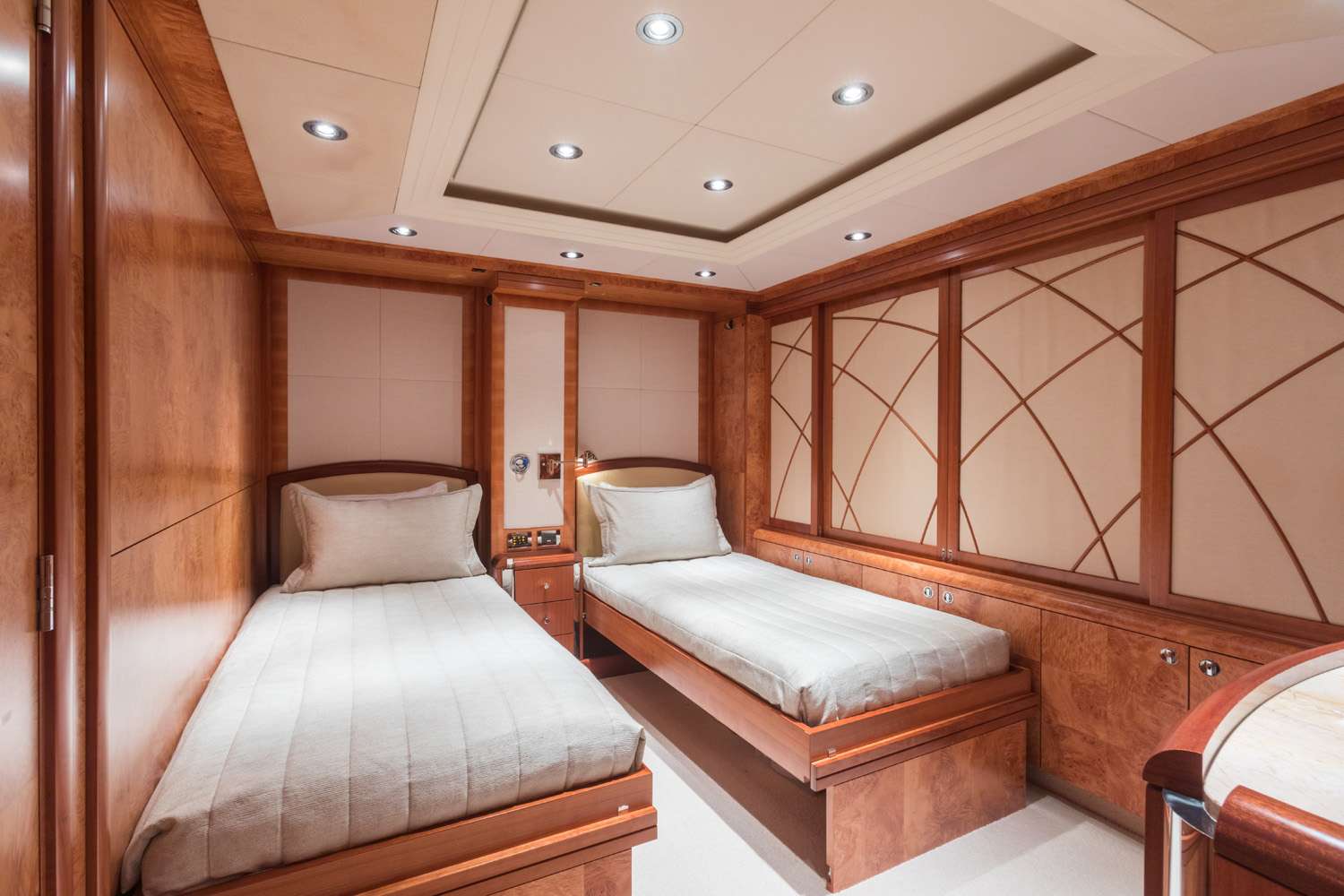 
Other Toys: Gym Equipment:
Treadmill
Free Weight
Communications: - Satcom
- Cell Phone
- Satellite TV
- Computer
- Zero Speed Stabilizers
- Internet accessibility in every stateroom
- Sky Lounge converts into Movie Theatre (Drop screen with projector and full surround sound)
- 42' Plasma
- New IP VSAT, VOIP Phones
- Entertainment system and network were fully upgraded with new HD kaleidoscope, servers and all new TVs
Crew Profile
CAPTAIN | Brendan Rooney | American
Brendan Hails from Allentown, Pennsylvania. After graduating from Duquesne University with a BS in business administration, he decided to make the move to a much warmer climate, where he could pursue a career in yachting. He began his journey 23 years ago and has completed transatlantic crossings, traveled from the Caribbean to Alaska, and cruised the eastern seaboard. He takes great pride in his role as Captain and strives to always remain firm in purpose. His goal is to make each trip the memory of a lifetime!

CAPTAIN | Stephen Bull | Antiguan
Stephen is an enthusiastic individual with respect and affection for the sea. After graduating with a Diploma in Yacht Management, he moved to building yachts whilst competing in sailing events home and abroad. His introduction to the Superyacht world occurred when he moved to Antigua to work for a local carpentry shop, which served the industry in refit and repair. After meeting the people of such a dynamic and diverse industry, he decided to join his first yacht some 16 years ago. Stephen feels very fortunate to work with fantastic individuals and teams and looks forward to continuing this for many years to come.

CHIEF OFFICER | Kylie Potgieter | South African
Kylie was born and raised in South Africa. Growing up on and near the water, she became an avid fisher as well as a surfing instructor and competition judge for 7 years. After sailing around Cape Town as a teenager she decided to join yachting and is always looking for new things to do during her downtime. After many enjoyable years in the industry, she looks forward to being able to share the experience with others.

BOSUN | Tom Watkins | UK
Having been in the industry for five years, Tom has grown a passion for yachting. He strives create a positive experience for each and every guest. Tom is a firm believer in fulfilling every guests request. He is very much into fitness and keeping a healthy mental and physical state. He enjoys walks in mountainous areas and being by the sea. He find pleasure in camping in the outdoors and exploring off the beaten path. Tom has a keen interest in learning more about barista coffee and the fundamentals of making a good cup of coffee. Tom would like to pursue this in the coming years in the hope to one day have my own coffee shop in small English country village.

DECKHAND | Shane Conway | South African
Growing up inland South Africa, in a family full of pilots, Shane aspired to do something different. He went through his adult life trying to figure out his place in this big wide world. Having gained experience in different sectors, Shane eventually settled on hospitality. He used hospitality to travel and see the world. Once Shane had seen all he could see, he decided to branch out into the world of yachting.
He joined his first boat as a refit project where he ended up spending most of COVID honing my skills and getting better with his hands. Once he felt he should leave the project, he joined a charter boat where he got to see the more hospitable side and getting better with guests and their needs. He now find himself here, trying to give every charter guest the experience they have been longing for.

CHIEF STEWARDESS | Aubrey Castle-Saunders | American
Aubrey was born in San Diego, California and raised in Honolulu, Hawaii. She grew up doing competitive gymnastics and later participated in cheerleading. She earned her bachelor’s degree in psychology from the University of Hawaii. After growing up on the beach, it was a natural progression to working on the water. She came into yachting a bit later in life than most but has made up for lost time, having cruised the waters of the eastern and western Med, the Bahamas, the Caribbean, and the South Pacific in the past six years since she began. Her background in fitness instruction and hospitality made her transition into yachting seamless. The thing Aubrey loves most about working on charter yachts is meeting new people and finding new ways to surprise them. She brings a finely tuned ability to anticipate the needs of her guests and a great sense of humor. When she isn’t working you can find Aubrey baking, cooking, doing arts and crafts, or trying out the newest fitness crazes. Aubrey has previously worked on M/Y Inception, M/Y Ocean Club, M/Y Mirage and M/Y Dream. She speaks English and is always keen to practice French.

SECOND STEWARDESS | Michelle Waugh | South African
Originally born in Johannesburg, South Africa, Michelle was drawn to her family’s ancestral home and moved to the United Kingdom. She gained her qualification as an aesthetician and worked for several years as a senior spa therapist in a very high-end hotel. She was bitten by the travel bug and decided that she wanted to travel throughout the U.S. and, shortly thereafter, started her yachting career. She has been in yachting for six years and absolutely loves the liveliness of the industry and always strives to give guests the most enjoyable experience. She will soon be laying her roots back down in Scotland and buying her first home where she hopes her dream of running a horse farm will become a reality in the years to follow.

THIRD STEWARDESS | Jessica Price | American
Jessica is from a small town in northern Georgia and has traveled extensively through the Caribbean and parts of Europe. After working in real estate for a few years, she decided to combine her love of exploring with her passion for service and entered the yachting industry. A true foodie, she loves to try local dishes and new cuisine. A few of her favorite hobbies are horseback riding, scuba diving, and FaceTiming with her dog Bear.

ROTATIONAL ENGINEER | James Bourne | British
James began his Engineering career studying Motor Mechanics. Upon finishing a 4-year apprenticeship with a major repair company, he became a qualified diesel fitter. In his spare time, he helped his brother build kit cars for fun and started to race dirt and trials bikes at club level. Leaving the UK to travel around Europe, he discovered the Hotel Barging Industry. James then became a qualified and licensed Pilot/Engineer for 12 years on the inland waterways of France- even learning French along the way! Joining the yacht industry in 2003, James continued to study towards new levels of engineering; this time, at sea. James now holds his Y3 CoC license. James has a passion for racing motorcycles on closed road circuits mainly in Spain but has also raced in the UK and New Zealand. He loves to build his own race bikes and spends most of his down time in his workshop developing and testing new parts for his bikes. When James is not racing you can find him back on the ocean kite surfing which has taken him all over the world to some of the most epic kite spots you can imagine. James has worked on a handful of Yachts in his career including MY Aviva, MY Siren, MY Romea, MY Belongers and currently Amica Mea.

ROTATIONAL ENGINEER | Brett Eichhorn | Australian
Brett grew up on the Gold Coast, Australia, a town well known for its beautiful beaches and world-class surf breaks, so life around the water comes naturally. Having a passion for music, he moved to Sydney to gain a degree in Music Production and Management. Working on the side as an Audio Engineer, eventually, took him to Europe where his eyes were opened to the world. For a couple of years took some time to pursue different interests, working as a mountain bike guide in Greece, surf instructor in Portugal, ski/snowboard service technician in Austria, and eventually a deckhand on a superyacht in the south of France in 2008. In the 14 years since worked both on deck, up to the capacity of Captain, and as an Engineer, gaining qualifications with the MCA in both departments; Y3 engineer, Master 200GT, and OOW 3,000GT. The journey has taken a path worldwide, which has helped build a skill set that can cope with the difficulties of working in remote or bizarre locations. Having now decided to settle in the Swiss Alps, he enjoys spending his off time snowboarding and mountain biking, and his work life still on the sea on Amica Mea.

CHEF | Dave Talling | Canadian
Chef Dave is an experienced, creative, and passionate chef with over 23 years of experience. He became a Red Seal Chef in 2002 and trained under French Chef Pierre Koffel, in Victoria B.C Canada where he was born. After learning the tricks of the trade, he took his experience and love for food to work in 4 different countries including Bermuda, Fiji, and Australia before making the move into yachting. Dave has been a chef aboard yachts for the past 11 years. As a yacht chef, Dave has traveled around the globe docking in 22 countries, while creating stunning meals each day for Owners, charter guests their friends, and family.

Growing up on the West Coast of Canada was key to his success in specializing in seafood. One can truly appreciate the delicacy of fresh seafood when you have spent your childhood digging clams on the beach and hauling crab traps from the dock with your dad. Dave’s love for the ocean has carried on his throughout life, little did he know he had been raised with an “ocean to table” cooking style that has influenced his career. When not in the kitchen, he loves deep-sea fishing, fly fishing, and salmon fishing and will spend all his free time doing so. His world travels have only fed his passion for both fishing and food. An avid traveler, with the ability to make the most of every situation, Dave’s passion of wildlife photography enables him to take advantage of the many sites he has seen in the 34 countries he has visited throughout his career. There are limited things that fit in a traveling chef’s backpack, in Dave’s you will simply find a camera, fishing gear, a laptop, a chef’s jacket, and his flip-flops. He looks forward to sharing his passion for cooking with you!
Motor Yacht Charters, By BHC
2805 East Oakland Park Boulevard #397
Fort Lauderdale,  Florida,  33306
Local Phone: 954-720-0475
Tollfree: 800-478-2029