At Barrington Hall we provide motor yacht charters around the world on various luxury yachts. The Motor Yacht listed below, PIPE DREAM, is one of the many motor yachts we offer for charter. Please contact us for up to date information on PIPE DREAM or any other yachts in your desired location. 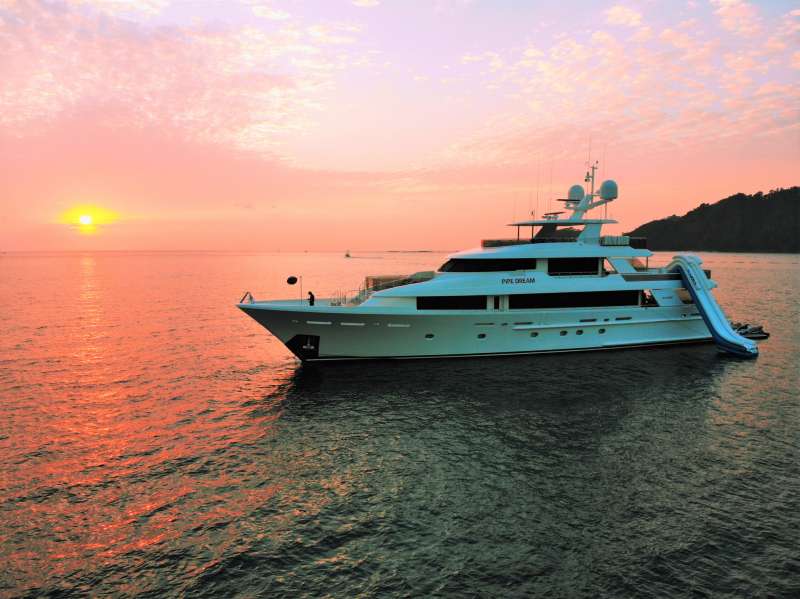 Main Salon: Earthy tones in leather, fine fabrics, sapele and mahogany compliment this space with a welcoming lounge area to port and a game table to starboard. A formal dining area is forward, and a day head is situated on the starboard side just forward of the main atrium.

Aft Deck: A 42” outdoor LCD TV is located above the bar with 3 bar stools and is visible to the large al fresco dining table for up to 10 guests. Bench seating and two cocktail tables are situated aft of the dining area. The aft deck has wind doors to protect guests from windy conditions while dining.

Bow: Walk-around decks lead to the bow which is a great place for sunning. Lounge chairs on the bow deck area forward allow the full sensory experience while underway – you may even catch a glimpse of dolphins frolicking in the bow wake!

Swim Platform: the swim platform is accessible via two stairwells (port and starboard) from the aft deck and is the perfect spot to board your Jet Ski’s or kayaks.

Master Stateroom: Situated forward on the main deck and outfitted in a soothing neutral color palette, the master stateroom features a centerline king-size bed facing aft with two nightstands, dresser, vanity with mirror, his and hers walk-in closets. The en-suite features a private head and bidet locker, a shower, and twin sinks. There is a separate private office area with desk, and the entertainment center has a 42” LCD TV, Blu-Ray, DVD/CD player, iPod dock, and surround sound.

Each detail has been carefully integrated to ensure the utmost in comfort, from the Egyptian cotton linens to the bedside docking stations. Wake up to enjoy the view from the large windows to either side of the master stateroom or keep the blinds closed for a post-sunrise sleep-in.

Sky Lounge: A superb entertainment area, the sky lounge is outfitted with a state-of-the-art entertainment system with 55” HD TV, Blu-Ray, DVD/CD, iPod dock and surround sound, games tables and a wet bar. Relax and unwind next to the fire whilst enjoying a board game or movie from W’s vast selection. A small desk to port is a great place for a game of chess or to catch up on your emails. And another game table is situated on the port side. There is also a small wet bar aft. The day head is accessible on the starboard side just forward of the sky lounge.

Sun Deck: The Jacuzzi is situated forward and is surrounded with an oversized semi-circular sun pad. The al fresco dining table seats up to 10 guests and is fully shaded. There is a 42” outdoor LCD TV with iPod dock, 3 chaise lounges aft, and a full wet bar. 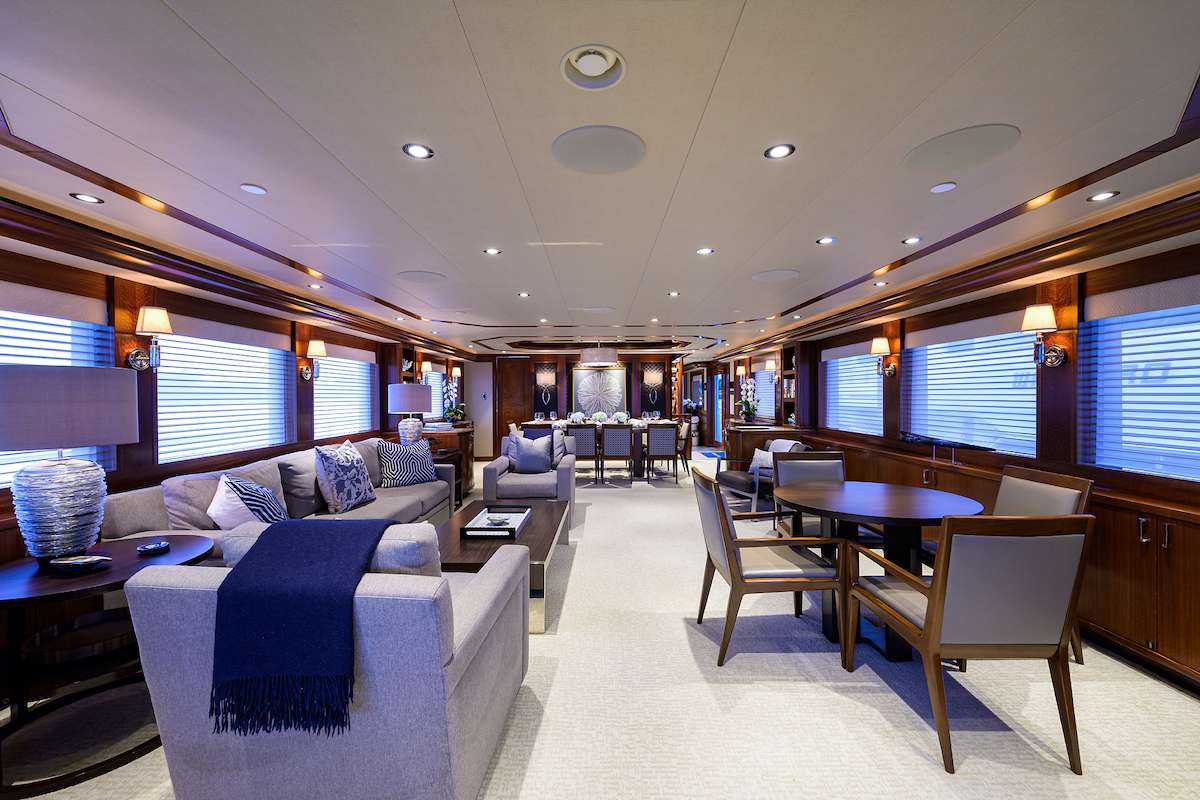 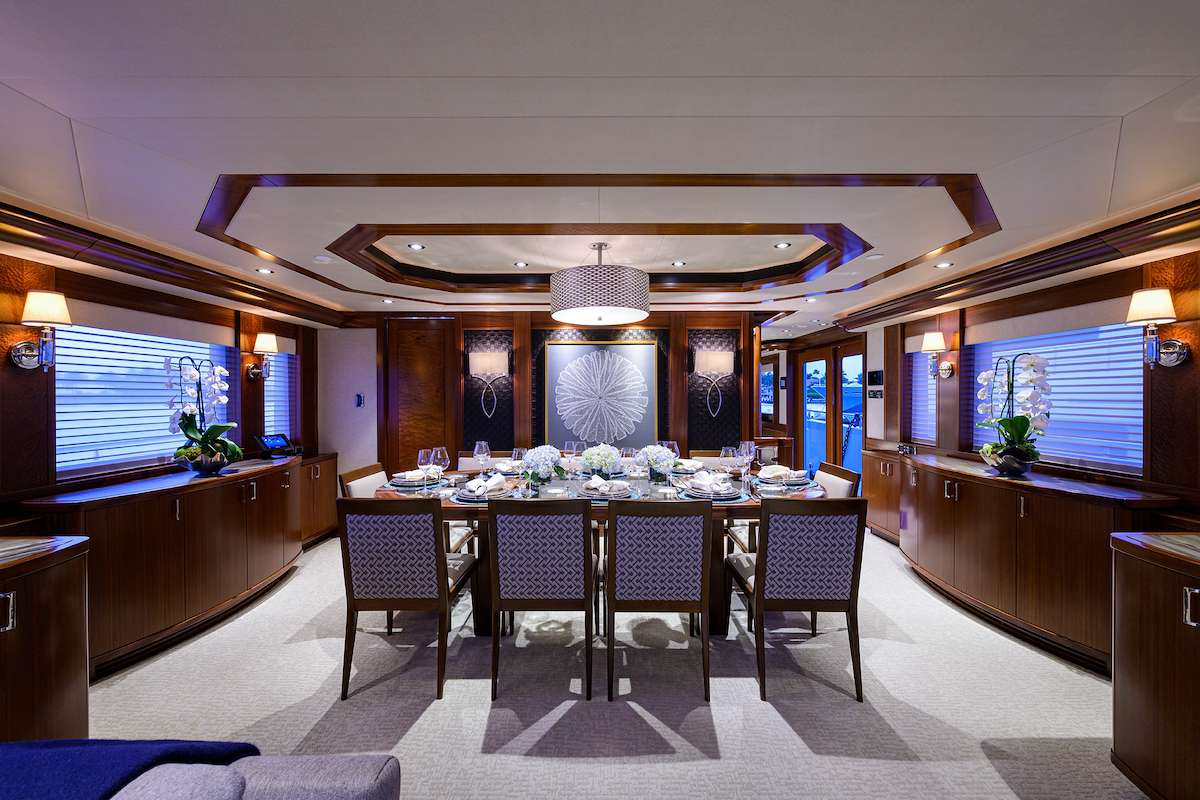 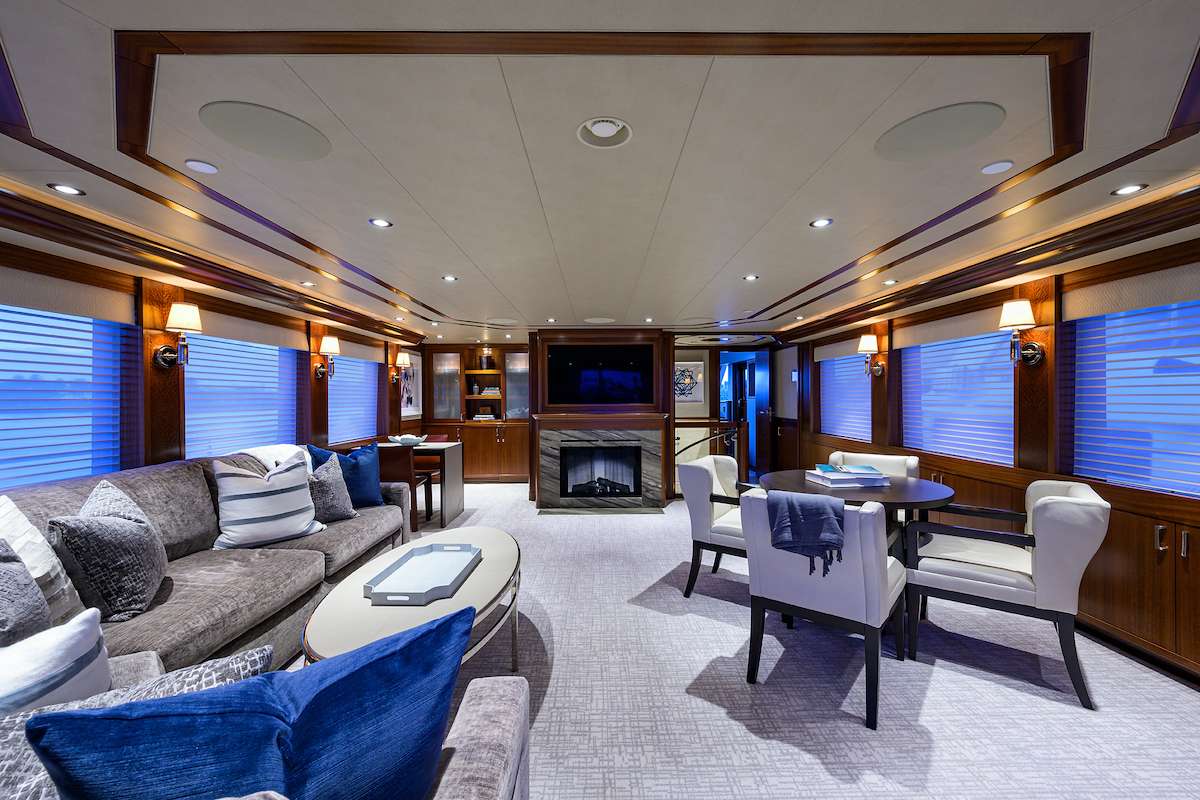 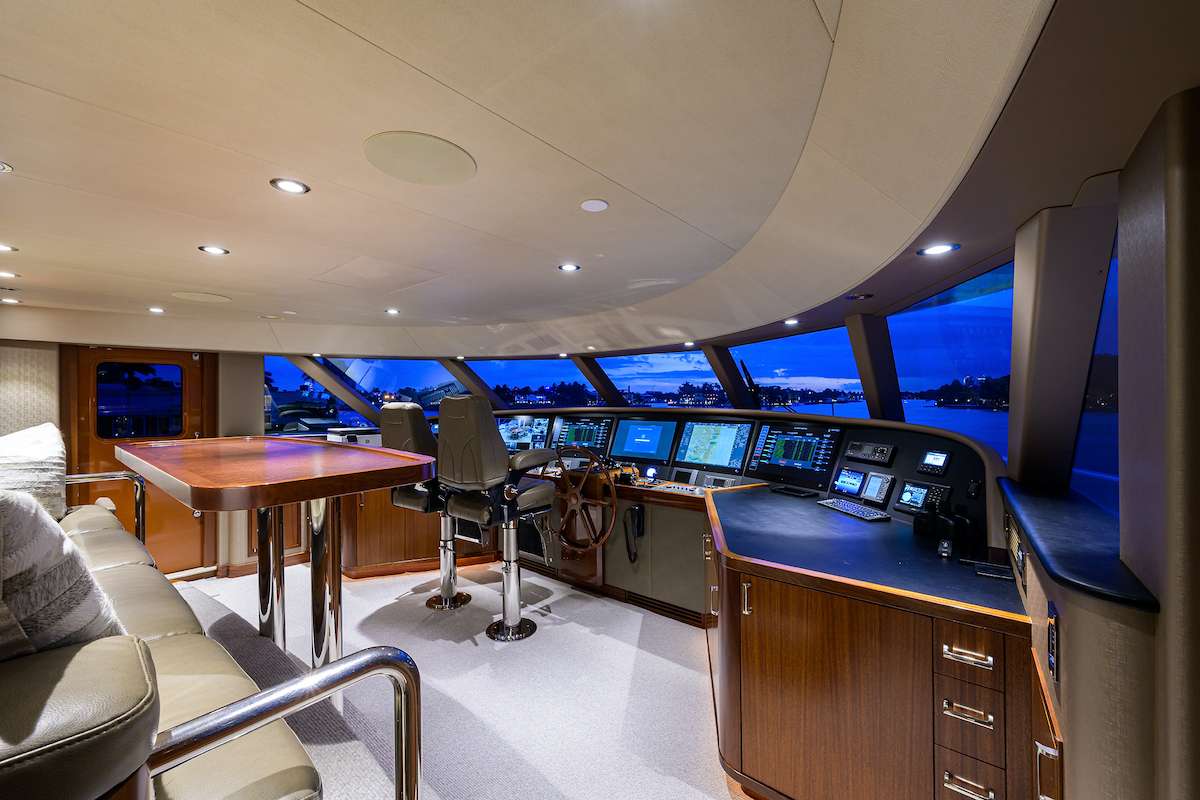 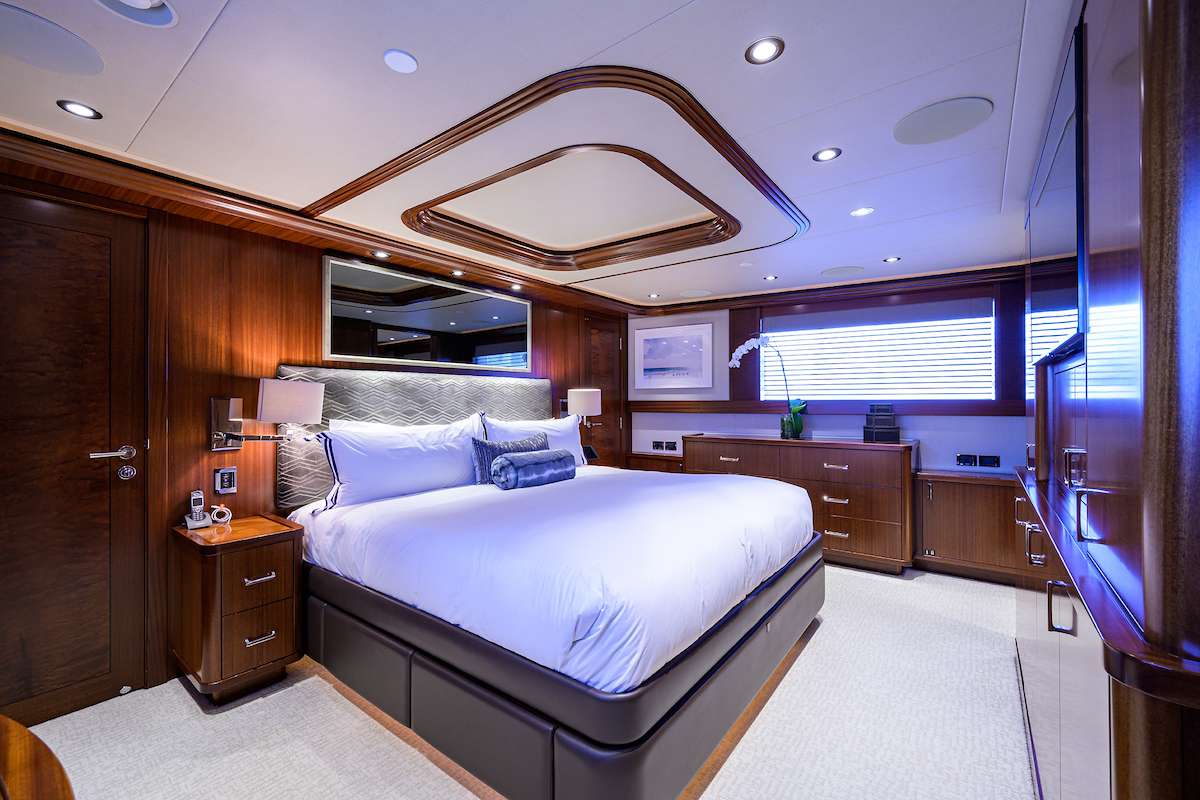 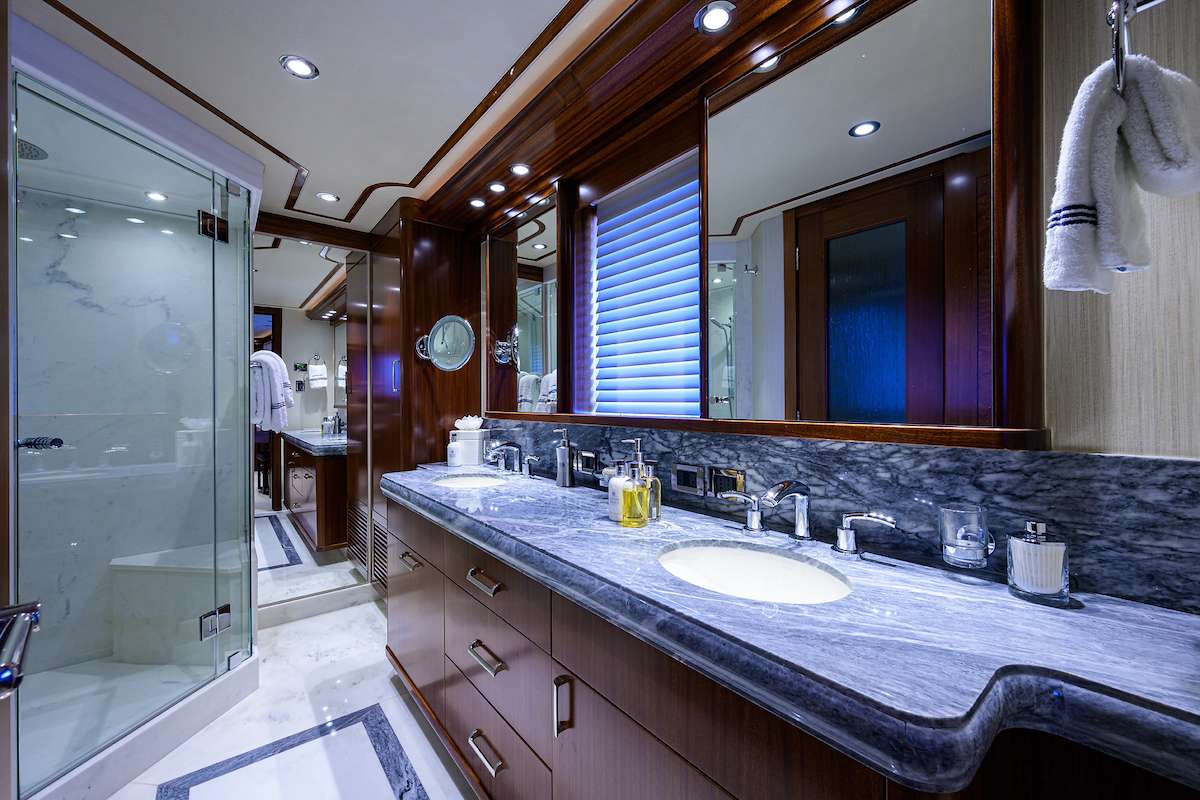 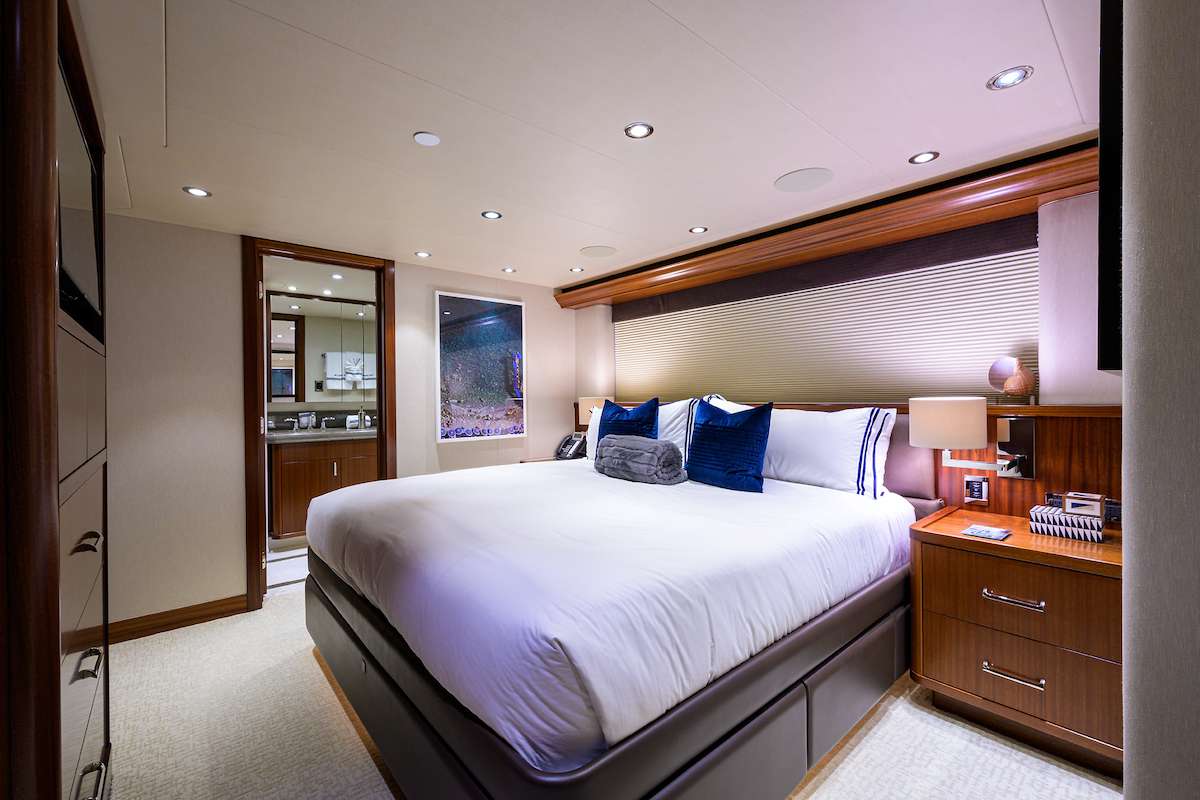 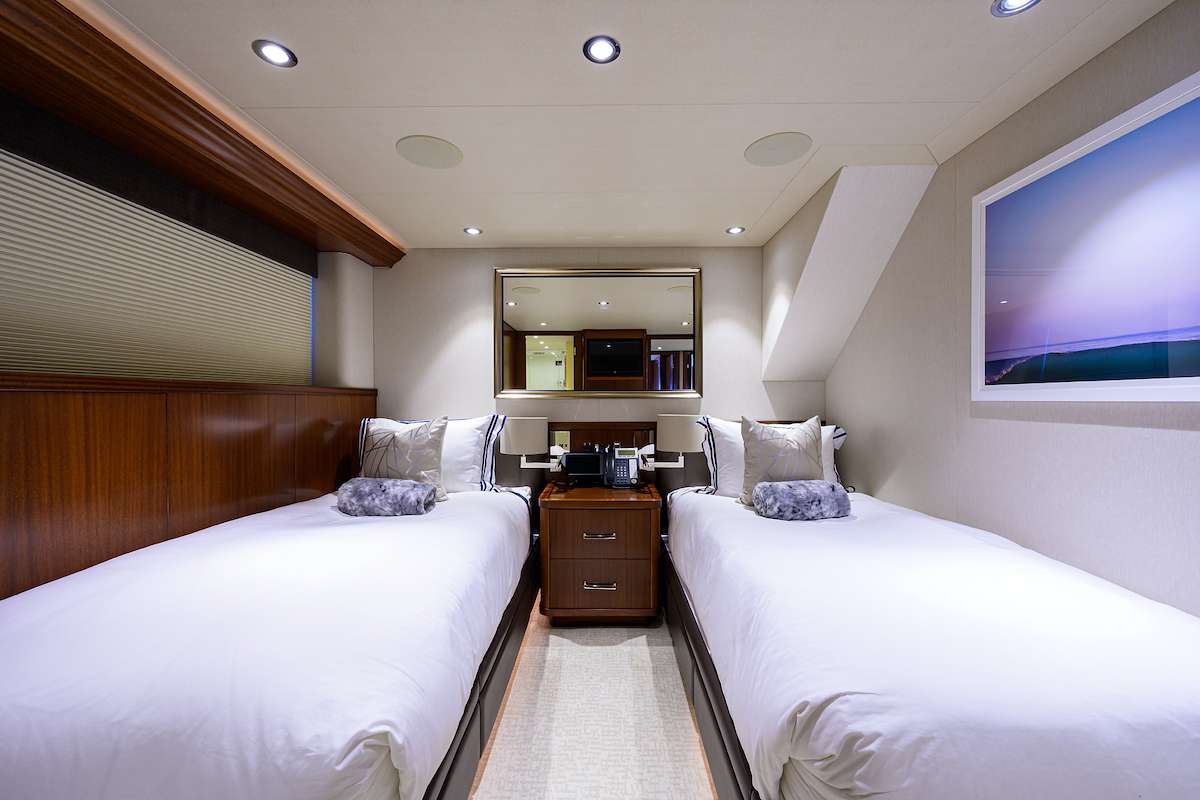 The entire AV system is state of the art and has been upgraded, along with all exterior speakers. Also has a Kaleidescape (TV Show's/Movie's) system in every room . 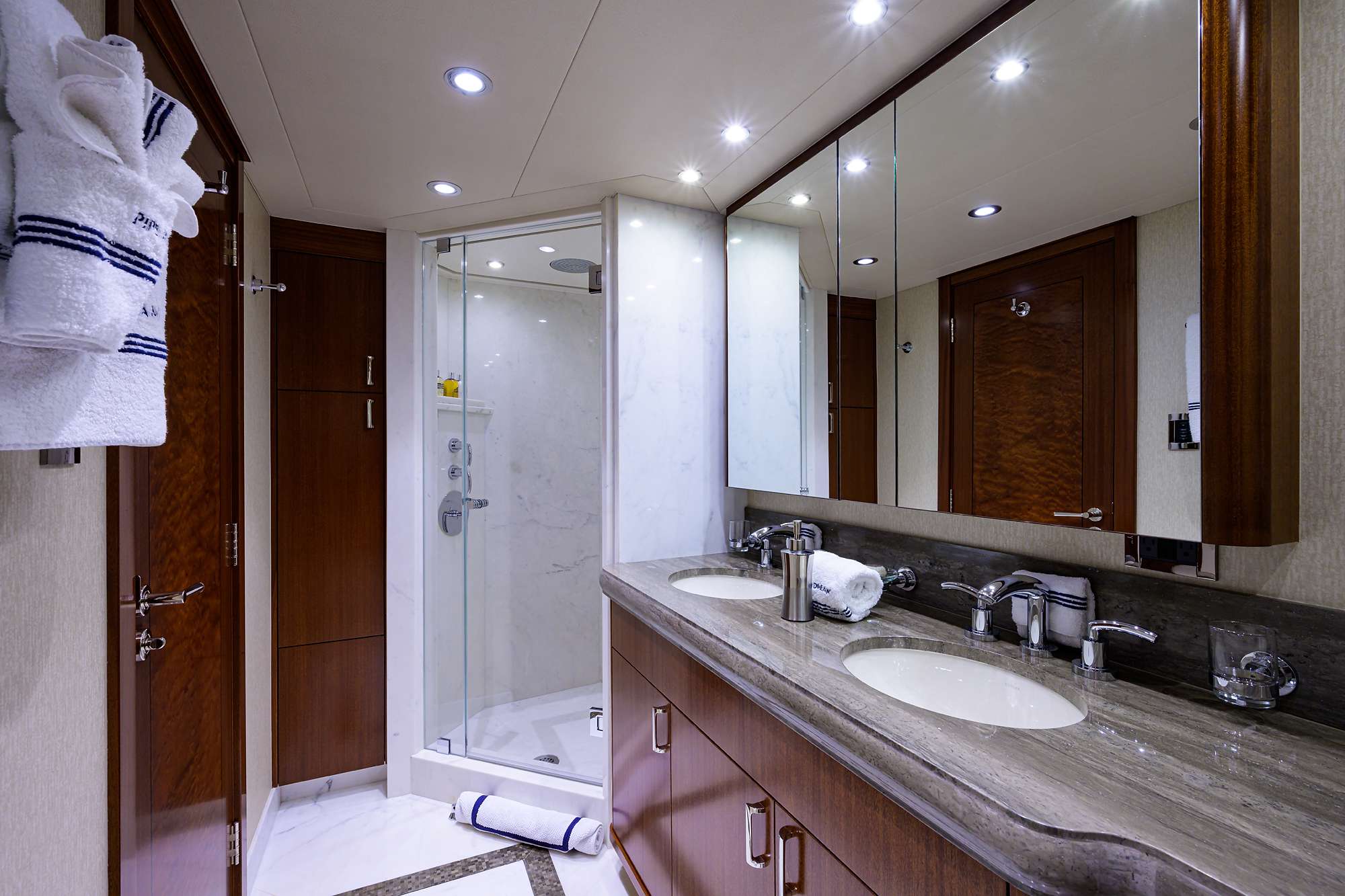 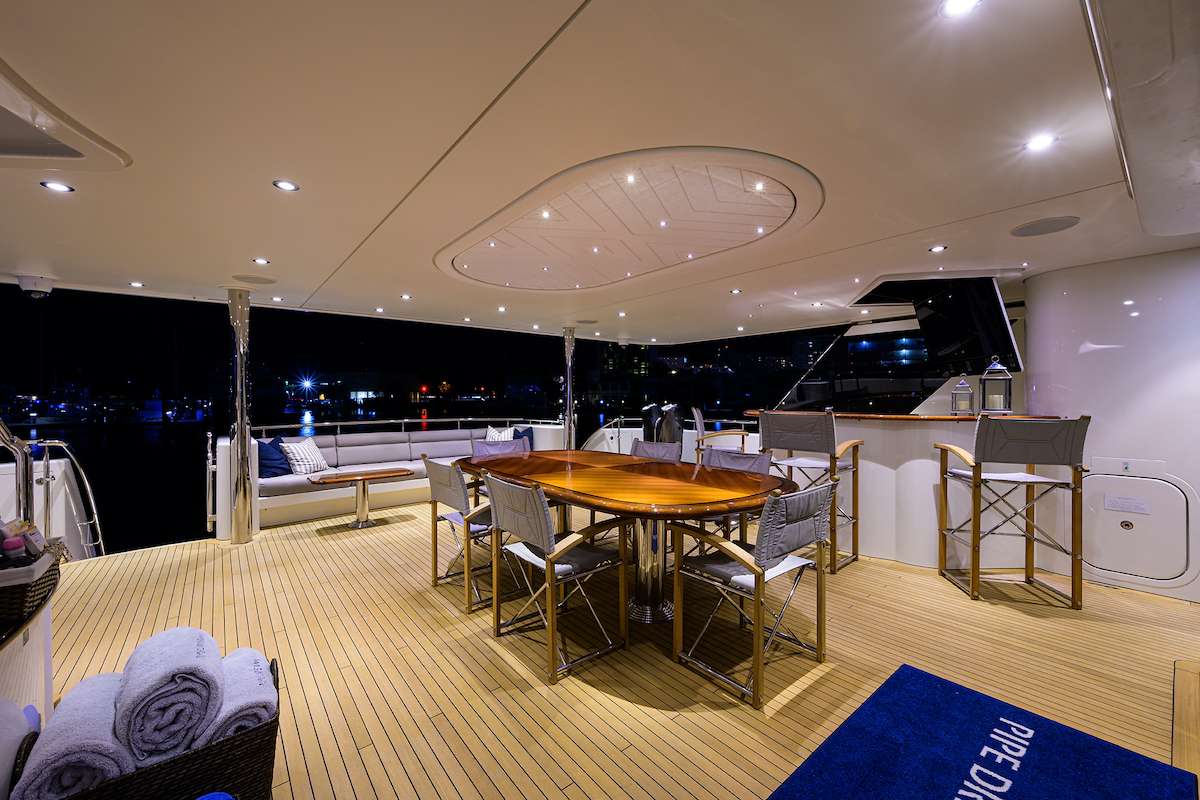 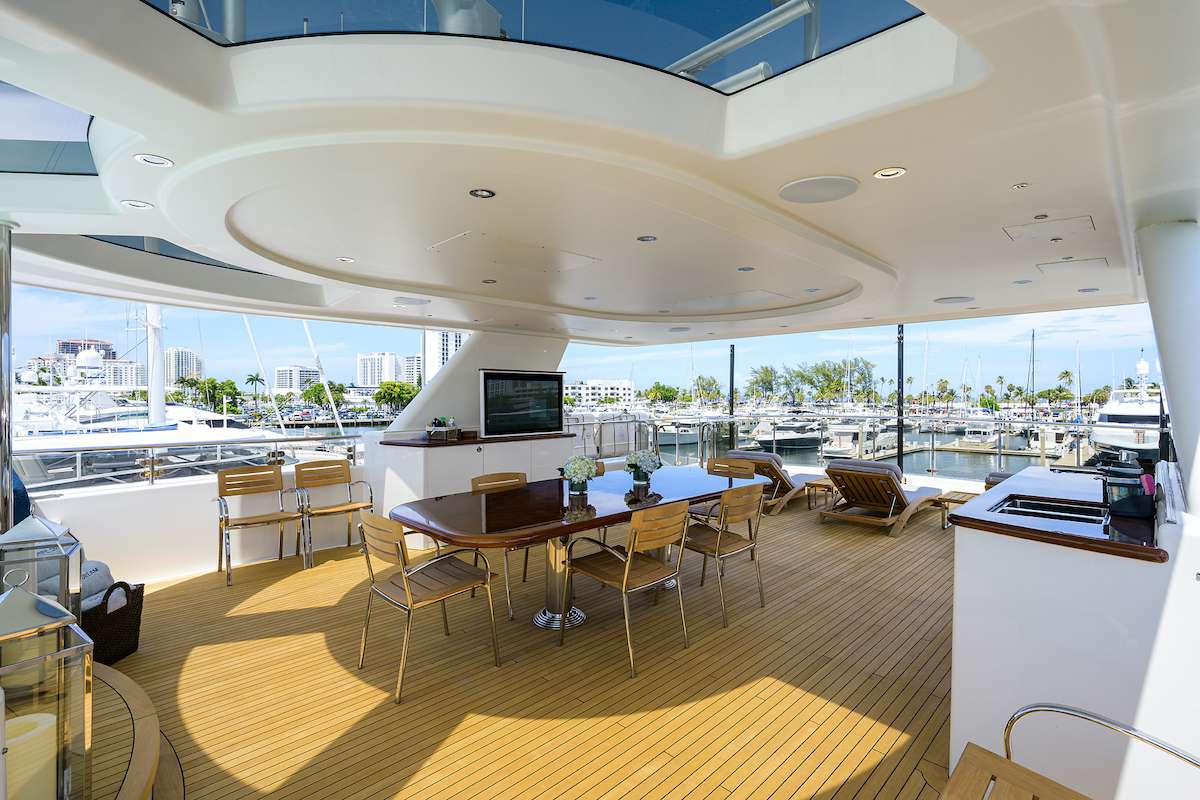 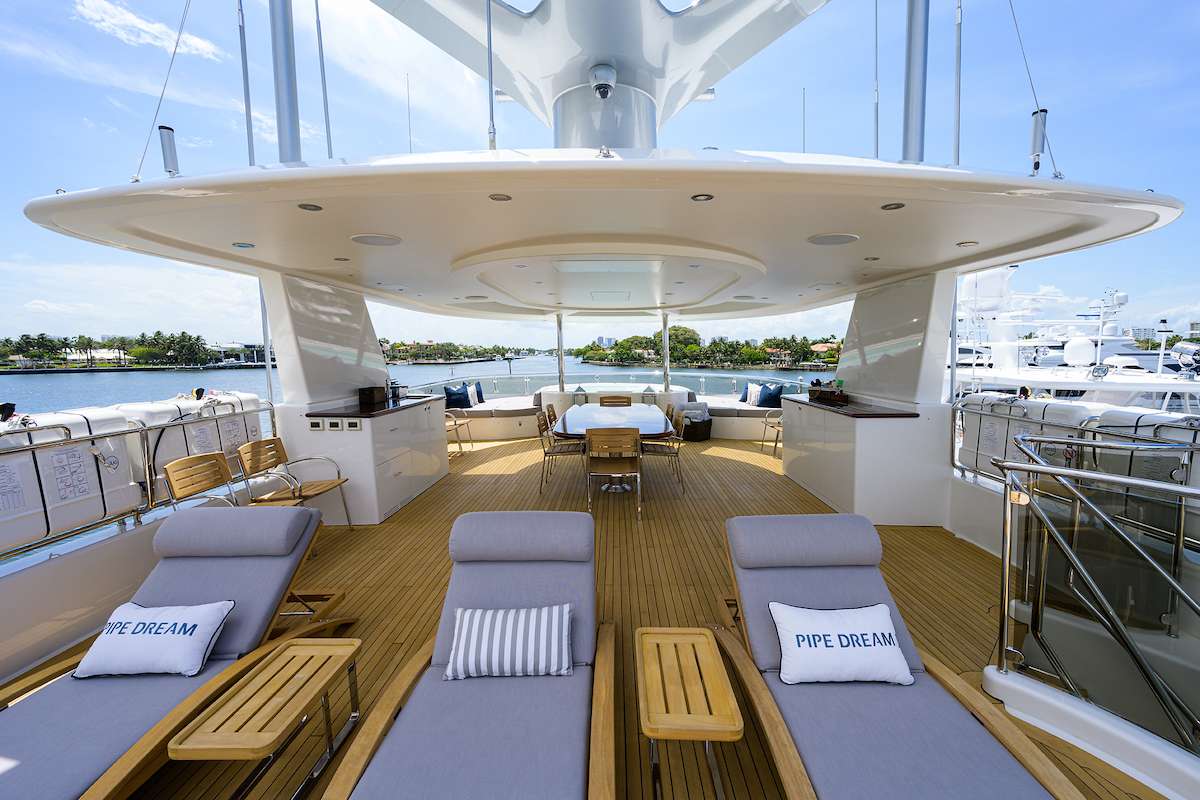 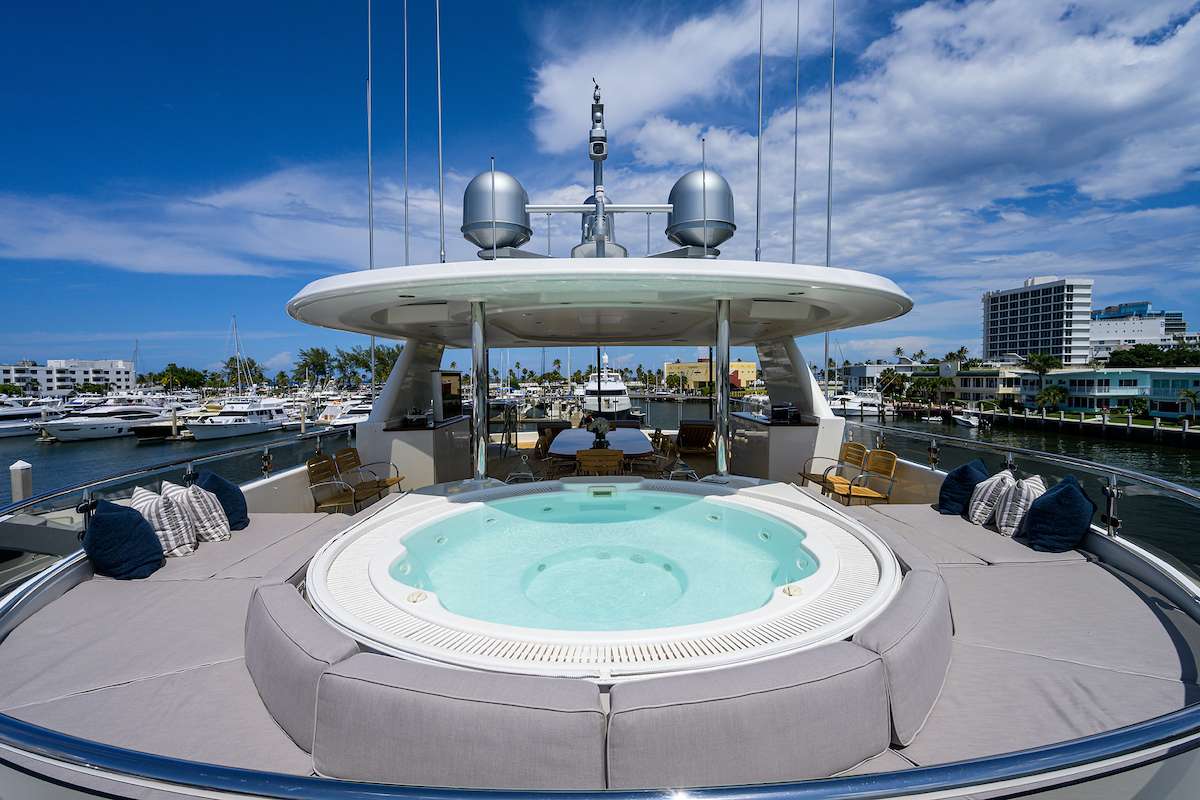 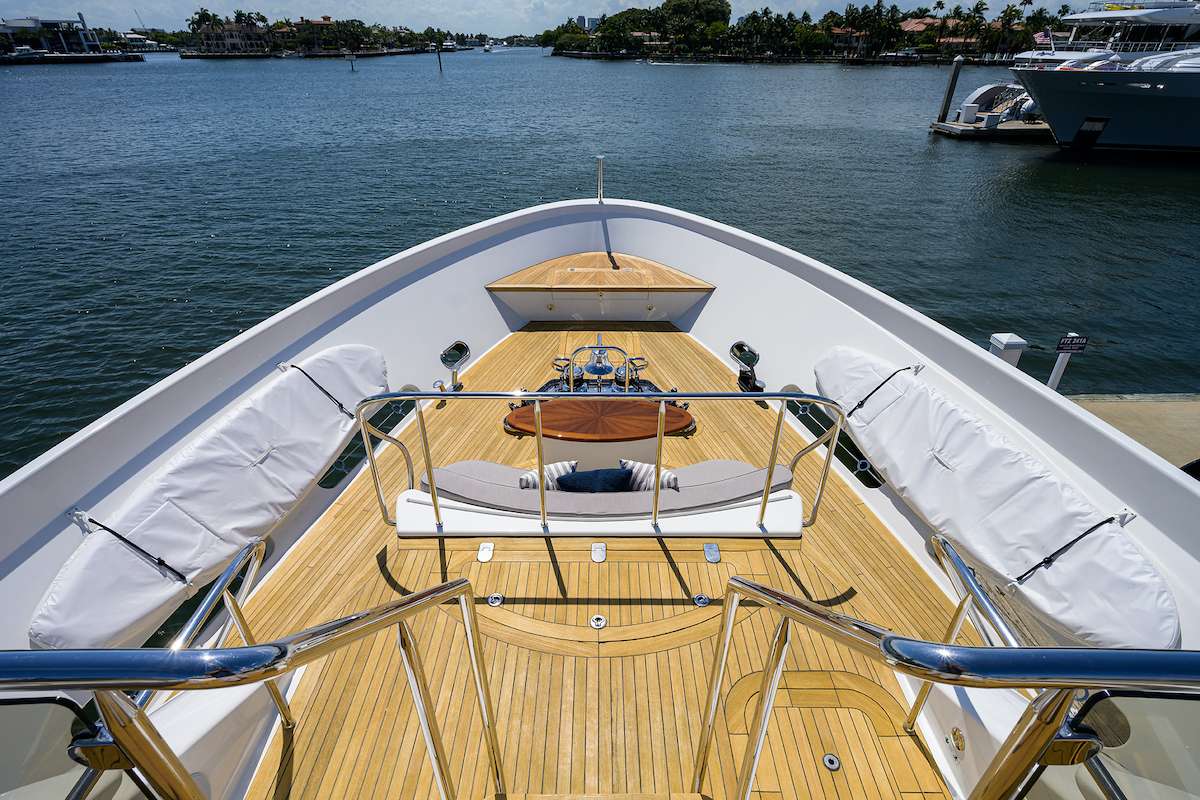 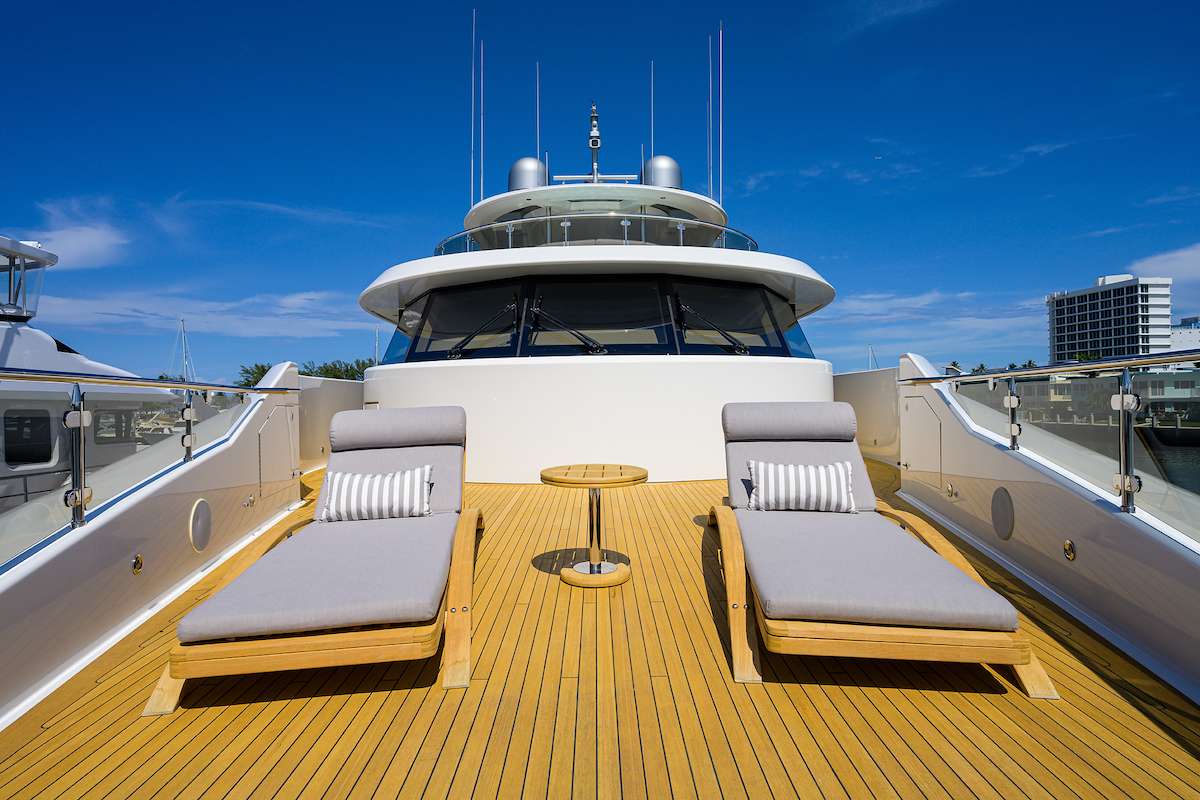 Captain Cory Brooks is from Holland, Michigan and grew up only a few blocks from Macatawa Bay on Lake Michigan. His father, a captain and yacht broker, had young Cory on sailboats and power boats before he could walk, so he was destined for a life on the water. Growing up, he would often ride along on boat deliveries with his dad, and on his summer breaks, he went to sailing school, competed in local regattas, and spent his weekends on his family’s 22-foot Sea Ray. While at college in Chicago, he began working for a tour boat and water taxi company, and then began pursuing his USCG licensing. Running several yachts on the weekends and delivering yachts with his father cemented his path in the industry, and he relocated to South Florida in 2012. His travels have taken him to many places, but some highlights have been visiting Machu Picchu, summering in Michigan, and snowboarding in British Columbia. When not at sea, he enjoys photography and working on home renovation projects. Captain Cory loves working in the yachting industry because it allows him to travel, explore new places, and meet new people.

Chef Greg Bergeron hails from Vermont and began his culinary career as a dishwasher at the age of 15. He discovered a true appreciation for cooking while travelling and working seasonally in vacation and resort destinations in the US. He trained with many chefs in Montauk, Martha’s Vineyard and Nantucket, which allowed him to develop his own unique style. In the winter of 2019, he embarked on his career in yachting after 12 years in the restaurant industry. This change afforded him the unique opportunity to prepare high-end cuisine using only the finest ingredients while travelling to exciting destinations. He loves instructing others in the culinary arts, and takes great joy in teaching them how to make fresh pasta. When not cooking, you’ll find him skiing, lounging on a beach, or unwinding with some fine scotch and a cigar. The place closest to his heart is Norton Point Beach on Martha’s Vineyard where he has many fond memories. Chef Gregory is dedicated to detail and guest satisfaction while staying true to his hometown roots. His dishes showcase his passion for sourcing fresh, local, and sustainable meats and produce.

Danielle Webber was born and raised in Southern California, and has always lived near the beach. She spent her high school years involved in competitive choirs and vocal lessons, so a career in musical theater appeared to be an obvious choice. A longing for adventure brought her to Florida and the world of yachting with her first position on a motor yacht. A short-term contract on a 140-foot yacht quickly turned into a long-term position, and she progressed from Deck Stewardess to Chief Stewardess in that time. After eight years in the industry, she is still passionate about yachting and the exciting experiences that it brings to her life. When not at sea, Danielle enjoys staying active, exploring new places, and spending time with family and friends. Her performing arts background brings something unique to her yachting career, whether she’s planning theme nights, murder mystery parties, specialty cocktails, or excursions for guests.

Kathy is from a small town, called Cranford, in New Jersey. While growing up in the Tri-State area, she enjoyed snowboarding in the Poconos with friends during the winters and spent summers soaking up the sun down at the Jersey shore. Kathy decided to stay close to home her first 2 years of college, and attended Rider University, but was yearning to travel and experience living in another state, so she transferred schools her junior year and graduated with a Marketing Degree from Florida Gulf Coast University in 2007. Kathy spent several years working for various South Florida companies before deciding to leave the constraints of an office job and change course to pursue a career in yachting. Kathy has worked on yachts since March 2016 and is looking forward to growing her career within the industry. One day she hopes to be able to own and operate her own boutique Bed & Breakfast. During Kathy’s free time, she enjoys spending time at the beach, skateboarding and exercising.

Jeff Marshall grew up in Warren, Pennsylvania and joined the Coast Guard after high school in 1996. He worked in the engineering department on an icebreaker in the Great Lakes, and after his time in the USCG, he returned home to a role as an electrician for a few years. In 2006, he moved to Miami and resumed his work in boating and yachting, switching between Captain and Engineer roles. While furthering his advancement in engineering, he has worked on yachts in the Bahamas, New England, the Caribbean, the Bahamas, Panama, Costa Rica, and Florida. When not yachting, Jeff spends his time camping, diving, travelling, and spending time with his parents and son.

Peter Milnes hails from Long Beach Island, New Jersey and graduated from Coastal Carolina University in 2016. He spent his summers during college shooting surf photography, and started his career in yachting following graduation when he became a deckhand/charter photographer. Since then, his work has brought him to Mexico, the Bahamas, Panama, Costa Rica, Florida, and the West Coast of the US. His love for the ocean and surfing continues to grow, and he loves sharing his knowledge about water sports with charter guests. His goal is to become a captain, and he is continuously pursuing that goal. In his leisure time, you’ll find him surfing, spearfishing, diving, golfing or hiking.

Tyler grew up in Oceanside California which is a town about 30 minutes north of San Diego. As a child, he spent most of my time either at the beach or playing hockey. Tyler is the oldest of three. While he never moved, his family traveled heavily and by the time he was 21 he had been to 25 countries on 4 continents. Tyler attended University of California Santa Barbara graduating with a double major in Global and Environmental Studies with an emphasis on Latin America. After graduating from university in 2017, he took a job working in San Jose, Costa Rica for a travel agency while living with a local family, learning spanish and exploring the country. When his contract ended, he decided to move to the coast town of Potrero and worked on a scuba dive boat. During his time there he achieved the rank of a Master Scuba Diver Trainer which allowed him to train students of all levels as well as the potential to manage his own dive shop. Throughout his time as an instructor, he had many students in the yachting industry who convinced him to make a career change so in late April he made the move out to Fort Lauderdale where he landed on M/Y Pipe Dream. Tyler bring his experience as a dive instructor and knowledge of travel industry to the team. As a scuba instructor, Tyler have the training to handle nearly any emergency that would take place in the water. He received his yacht related training in Fort Lauderdale at Bluewater Crew Training. on his spare time he enjoys traveling, playing hockey, guitar, cooking and scuba diving as much as possible. Tyler speaks English and Spanish and knows basic Italian.