At Barrington Hall we provide motor yacht charters around the world on various luxury yachts. The Motor Yacht listed below, FREDDY, is one of the many motor yachts we offer for charter. Please contact us for up to date information on FREDDY or any other yachts in your desired location.

Low Price: $80,000  High Price: $80,000
Length: 106Ft
Beam: 23 Ft
Draft: 6.5Ft
Year: 2017
# Crew: 5
A/C: Full
Guests: 10
Cabins: 5
King: 1
Queen: 2
Double: -
Single: 2
Twin: -
Pullman: -
Builder: San Lorenzo
Refit:
Accommodations: One of the only 106' San Lorenzo's for charter in Florida and the Bahamas. On deck Master plus 4 additional STATEROOMS below offer accommodation for 8 or families up to 10. Use 4 staterooms as double beds and 1 as a Twin layout or 3 double staterooms and 2 Twin staterooms (use of 6 or 7 beds). Innovative features for this size include zero speed stabilizers and concealed balcony off of the salon/ dining area as a unique and quiet space at anchor for one or two.

Warm light woodwork throughout and full length SALON windows give an indoor/ outdoor feel with elegant soft furnishings to elevate from a casual atmosphere to a more luxurious one. DINING is offered al fresco on aft and flybridge levels while formal salon/ dining for up to 10 is also available. Huge FLYBRIDGE area completely designed for guest use whether lounging or sunning on extra wide low profile sunbeds or having fantastic cocktails at the full bar while enjoying a selection of tapas displayed on the teak table beside. Shade and sun options here will keep all guests comfortable. From bow to stern there are so many useful guest spaces including the beach club aft up to the settee on the FOREDECK.

* Photography by Thierry Dehove and Sanlorenzo 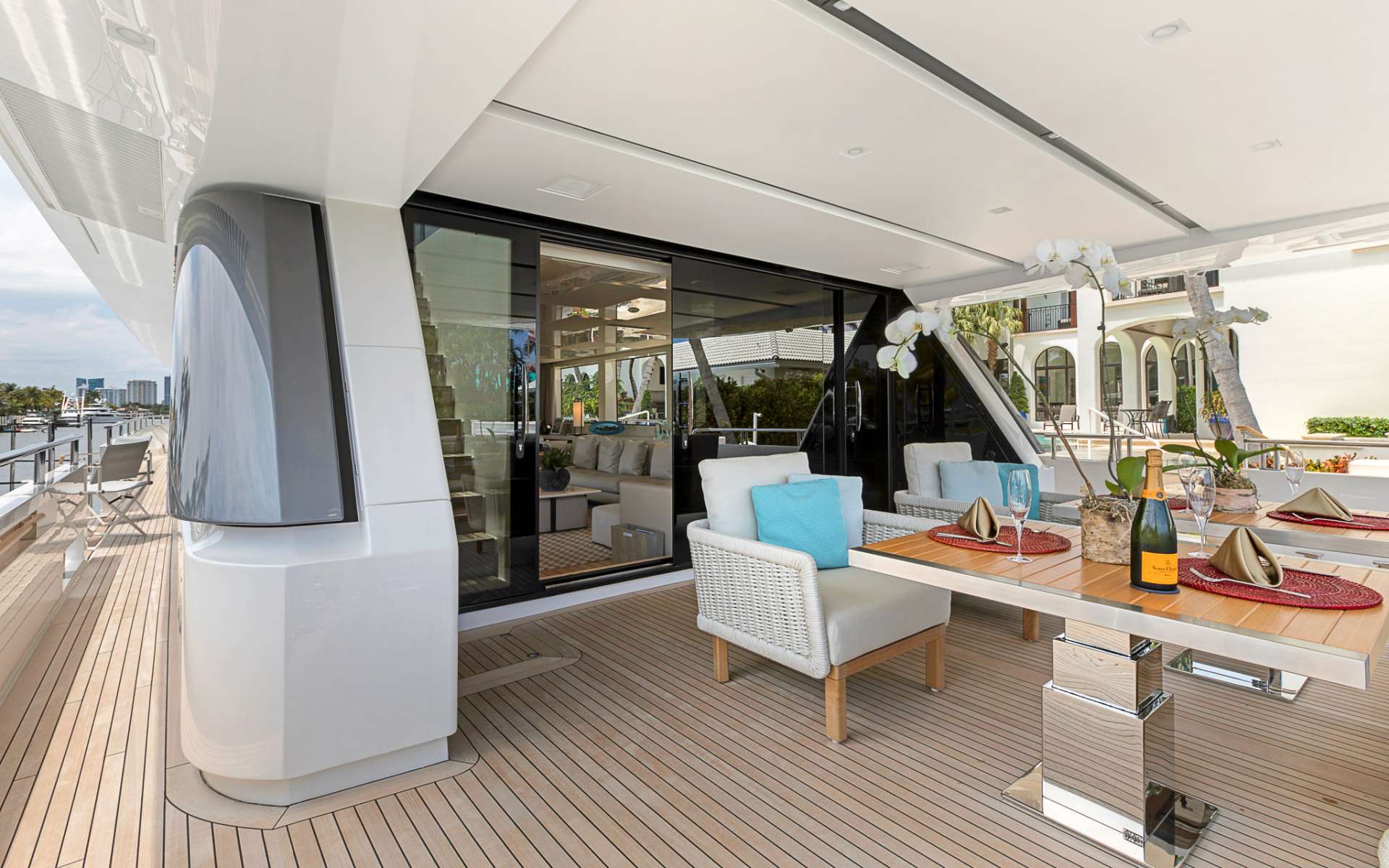 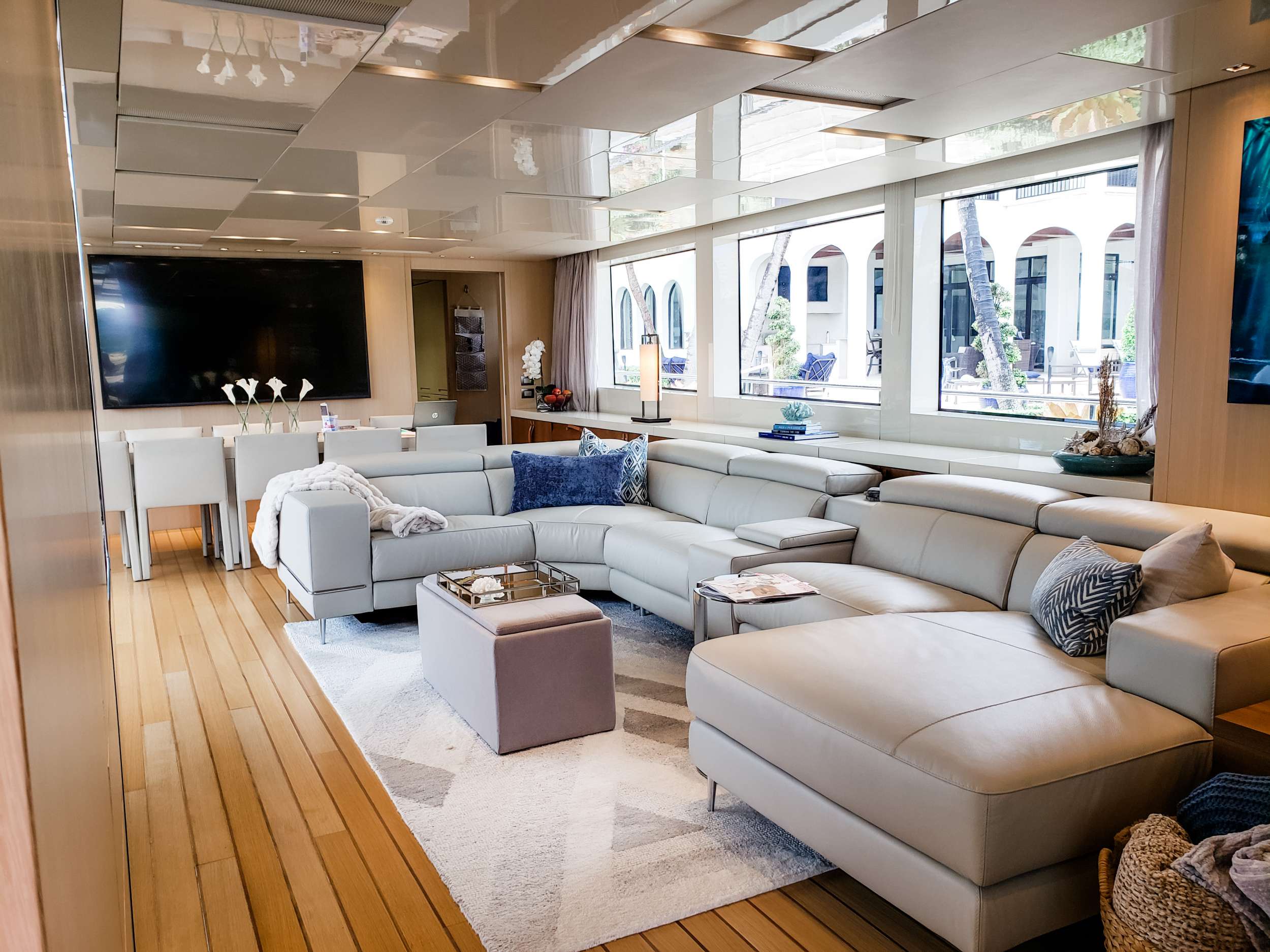 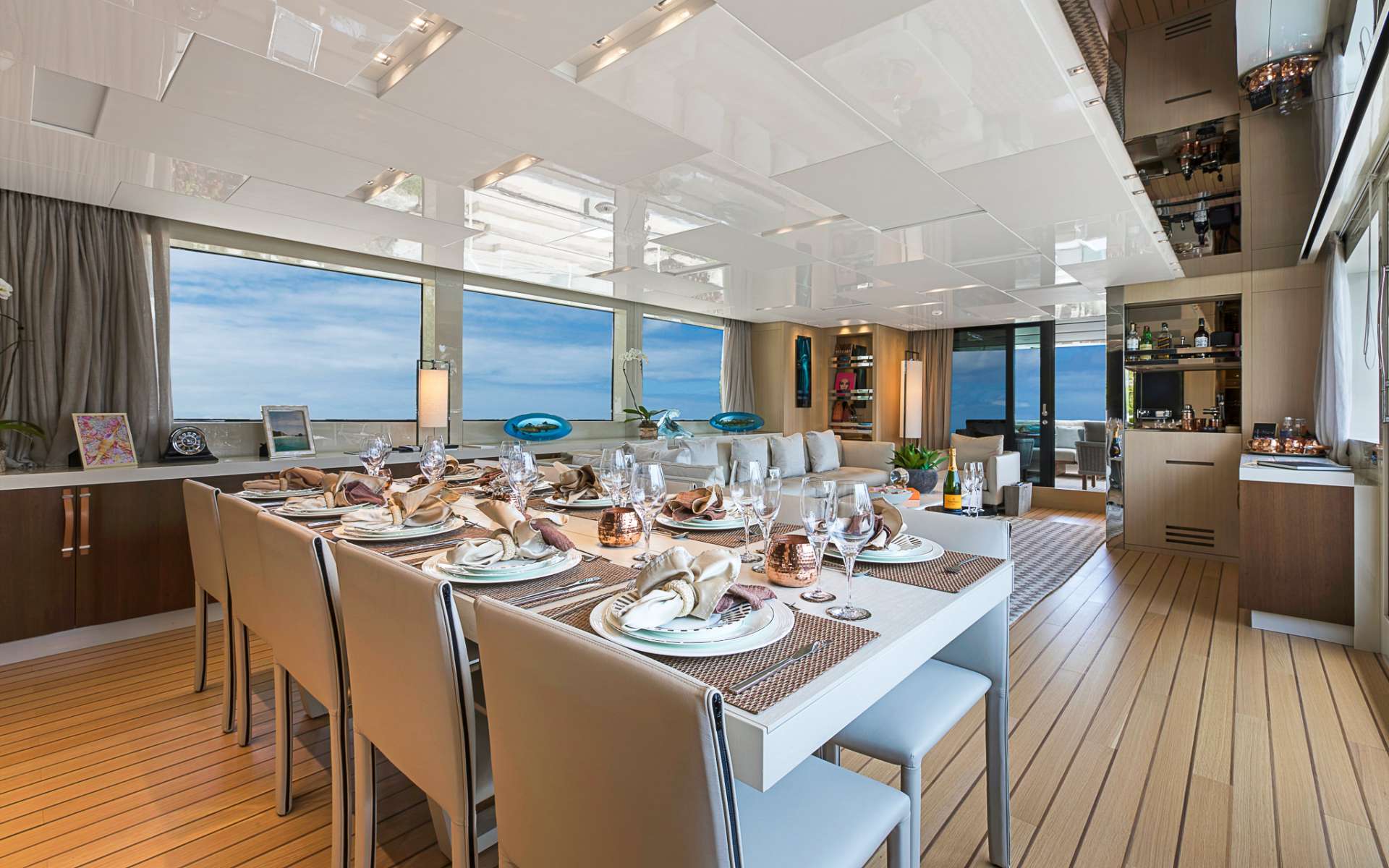 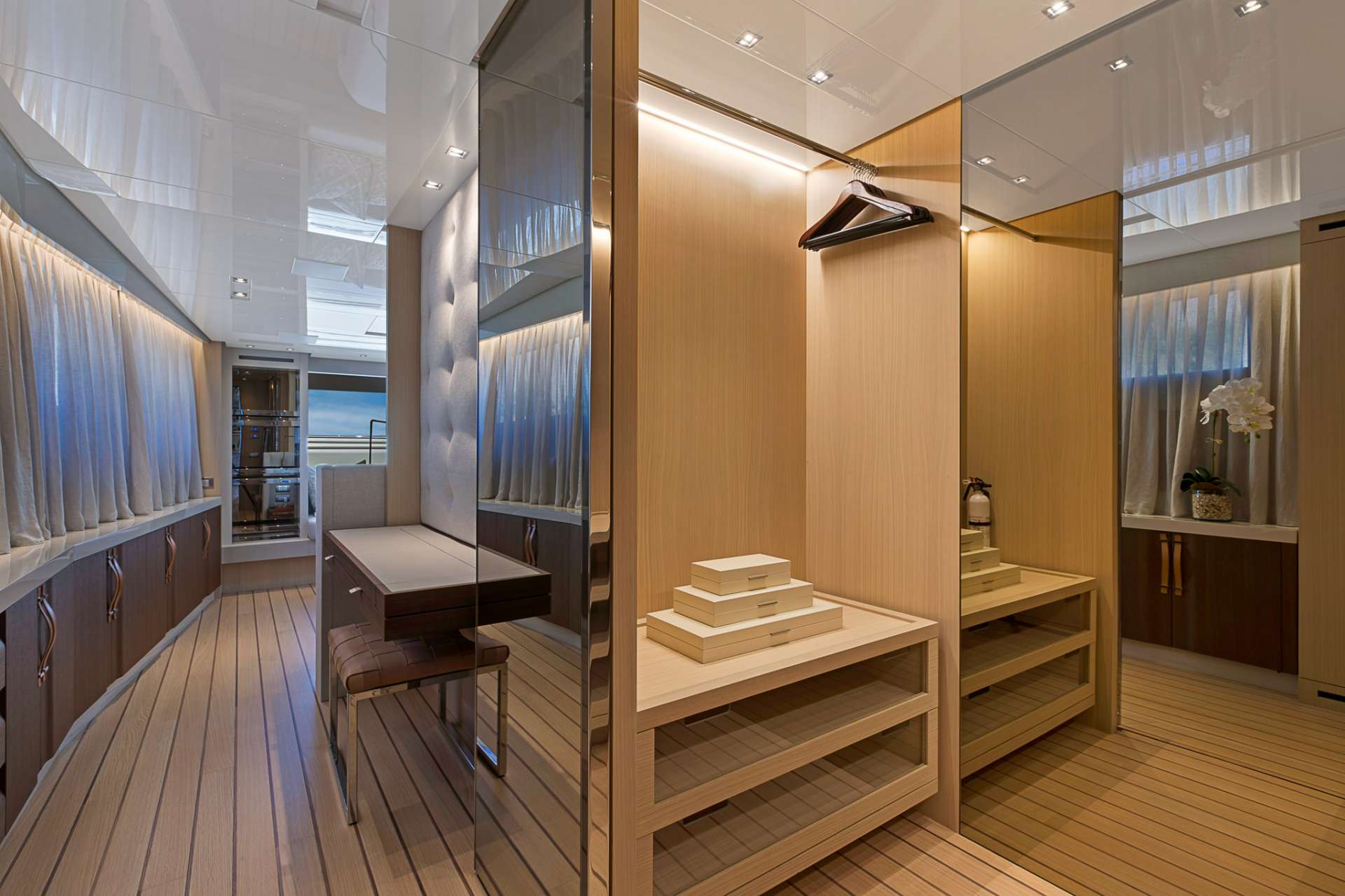 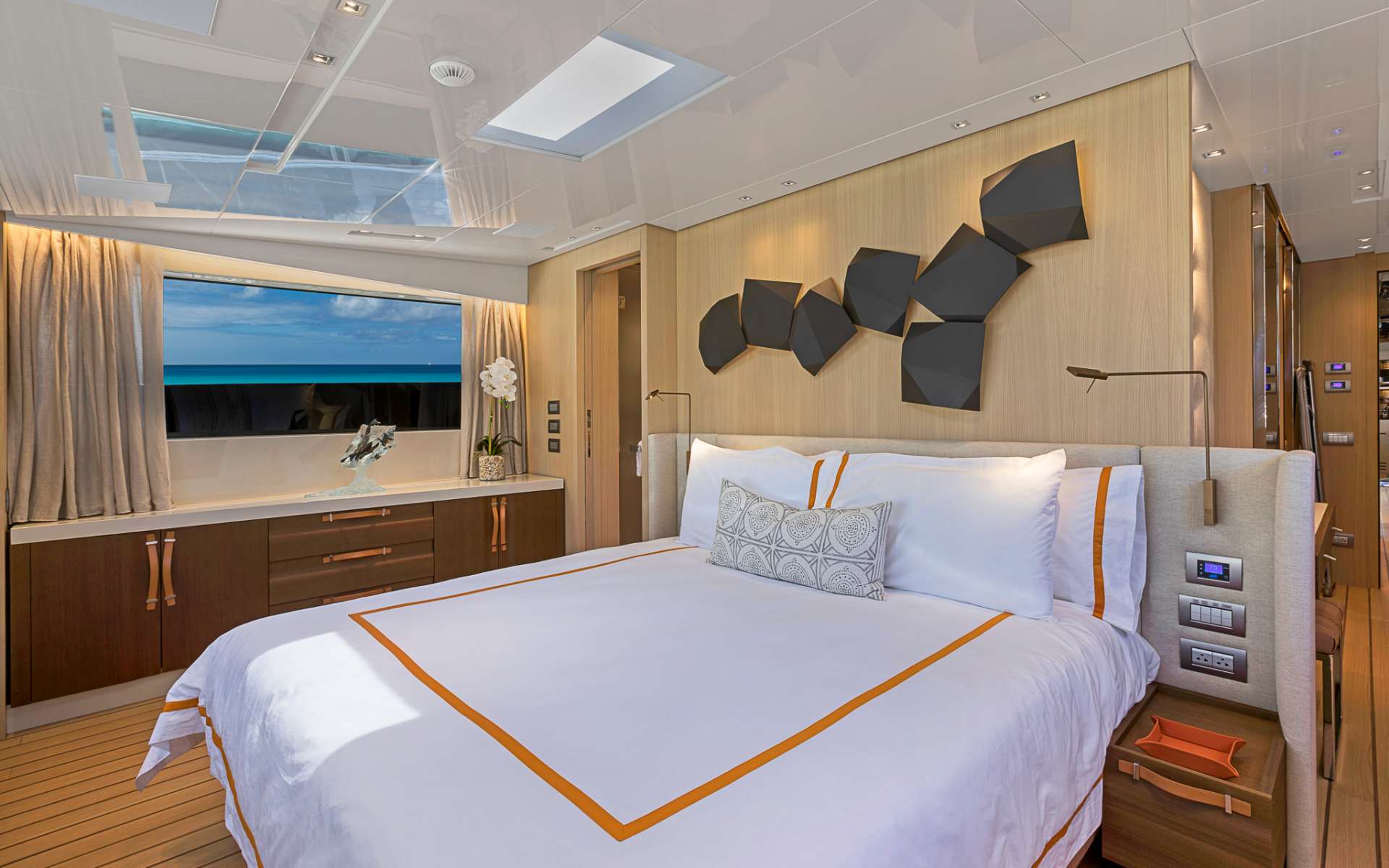 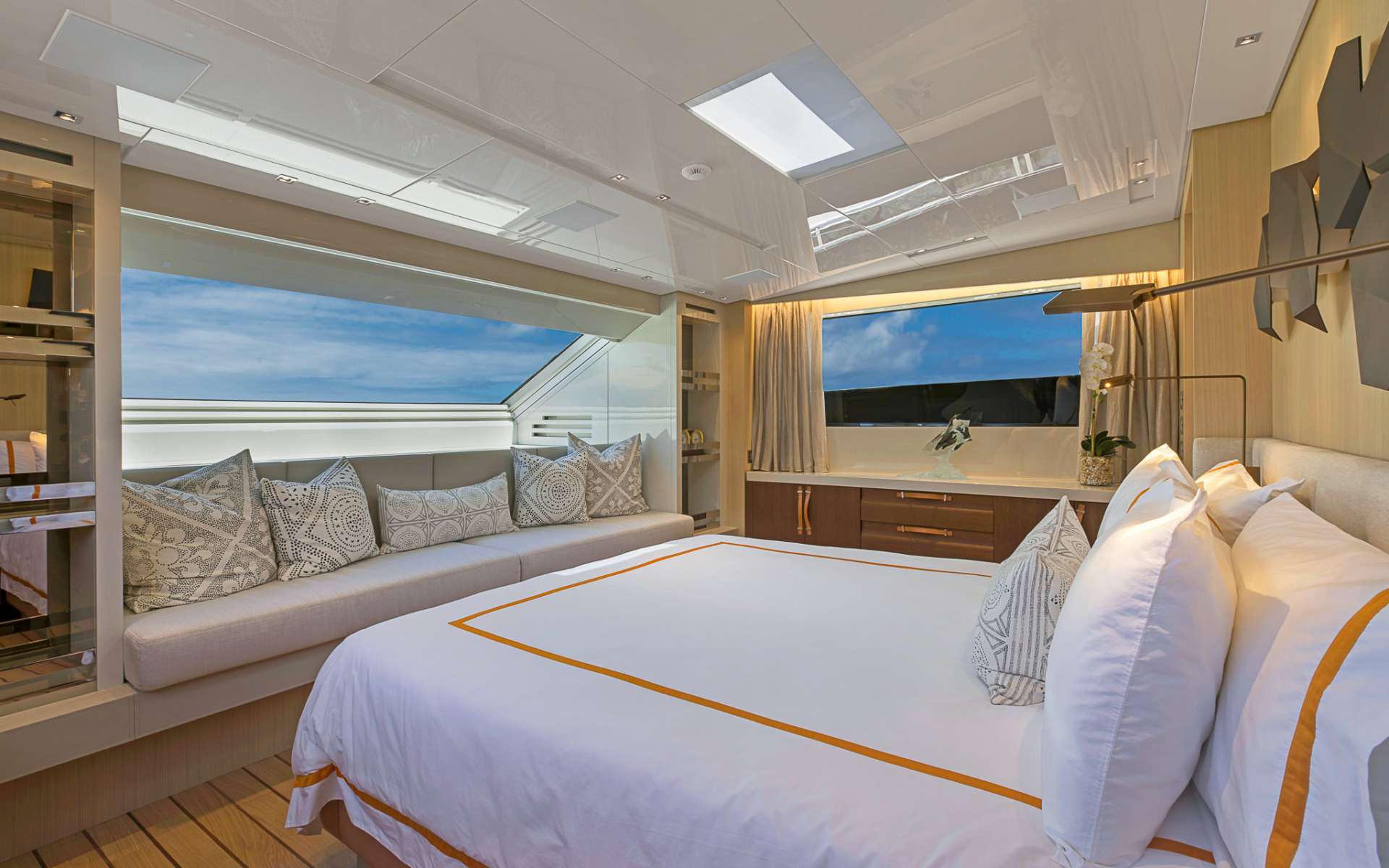 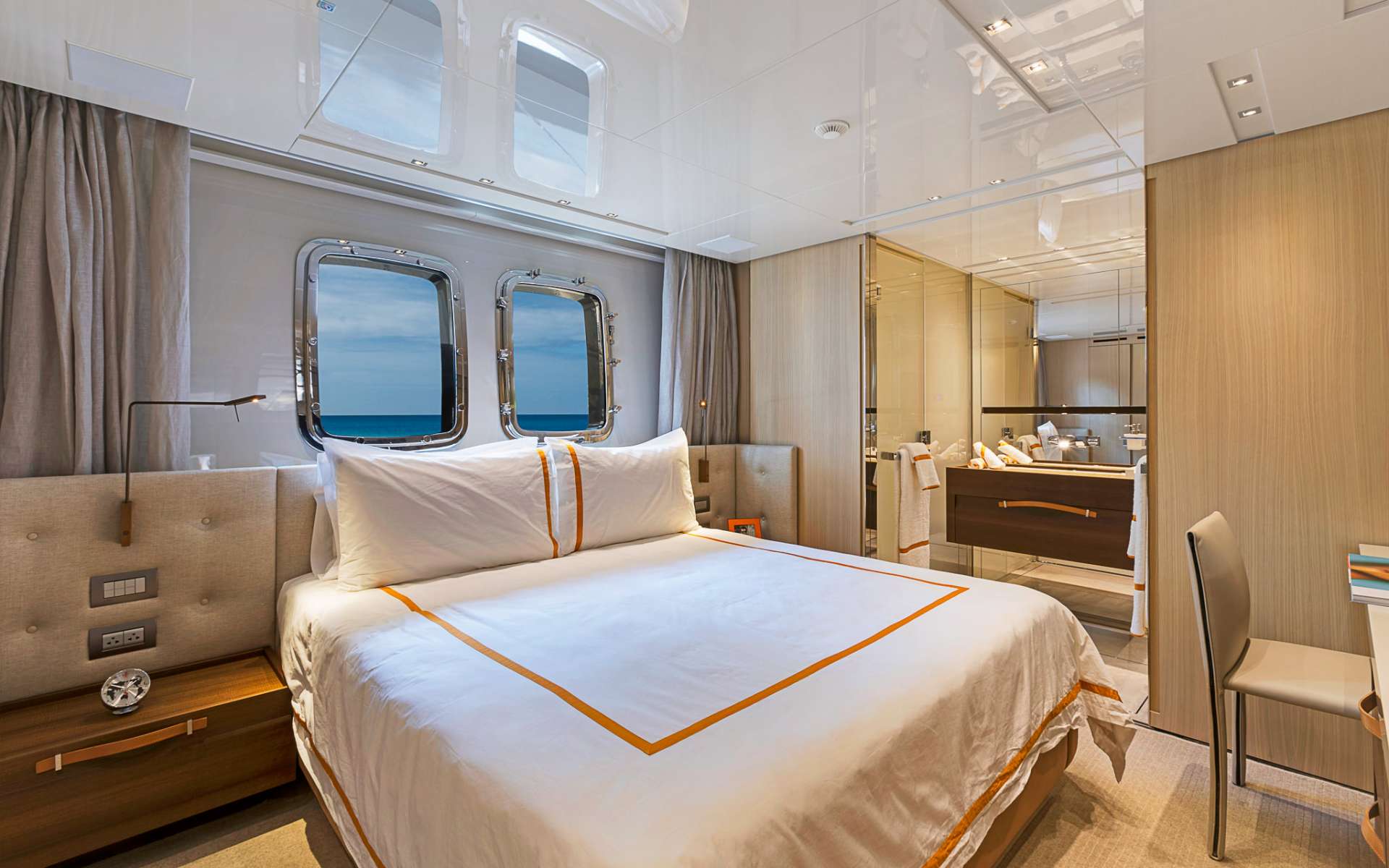 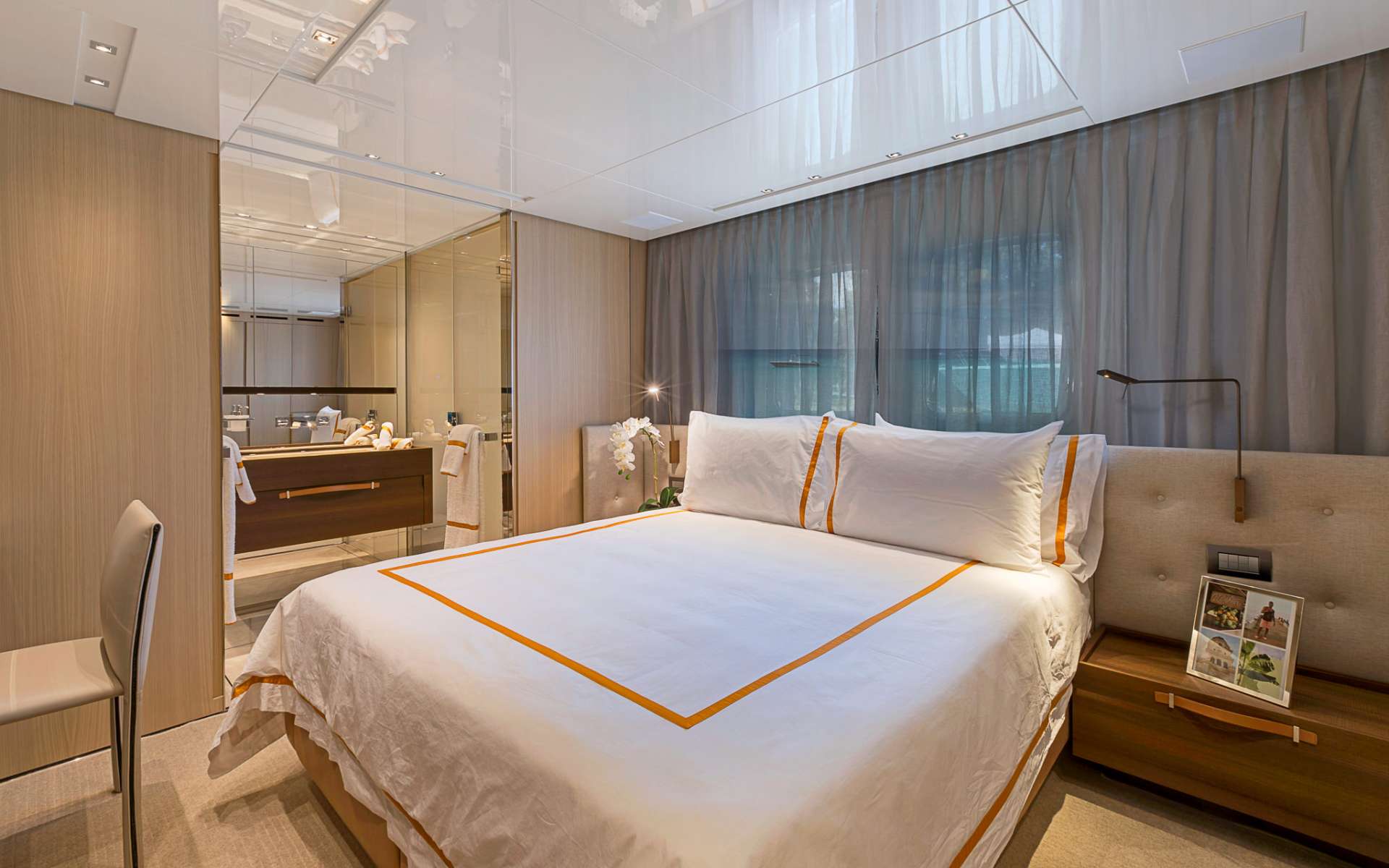 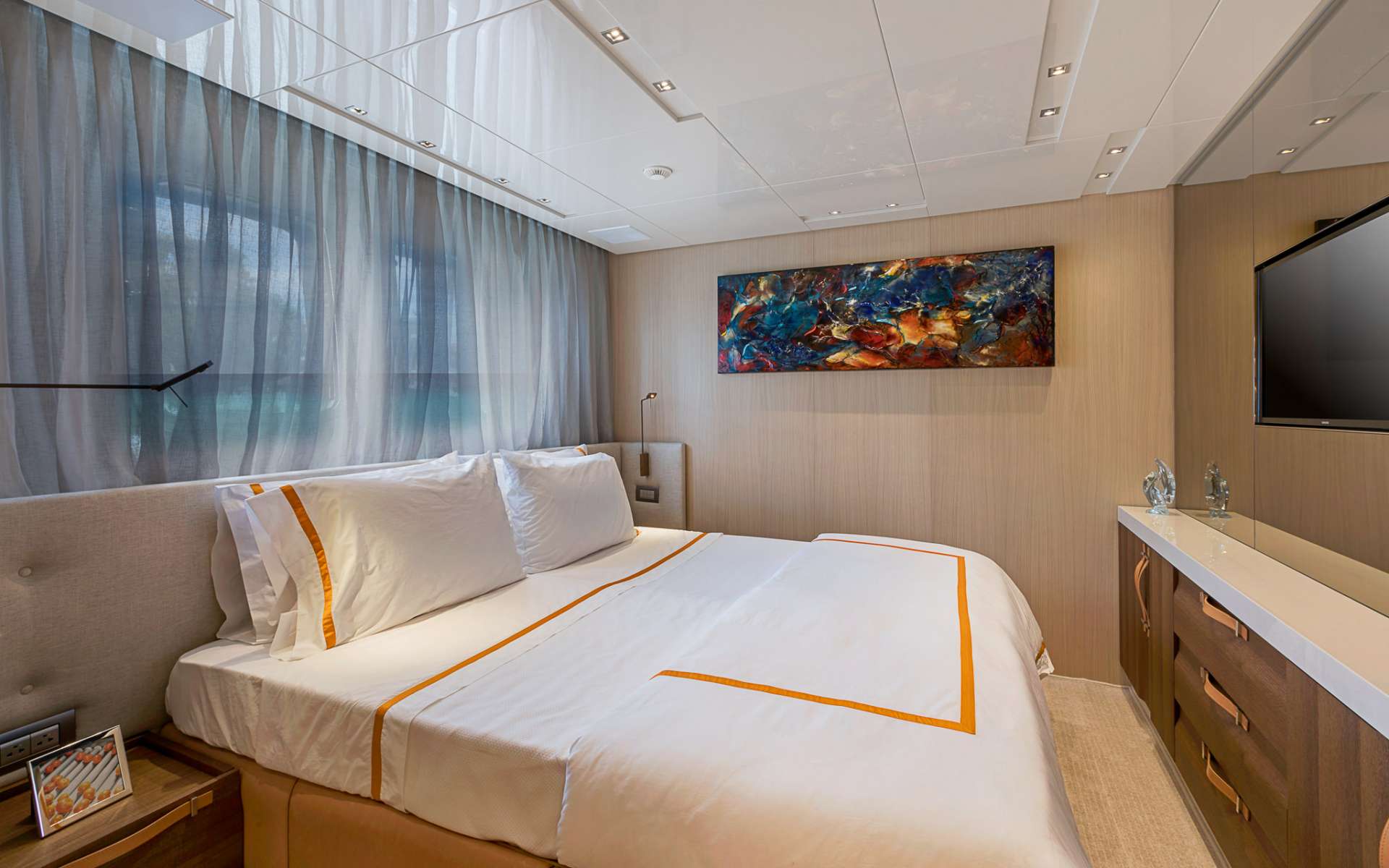 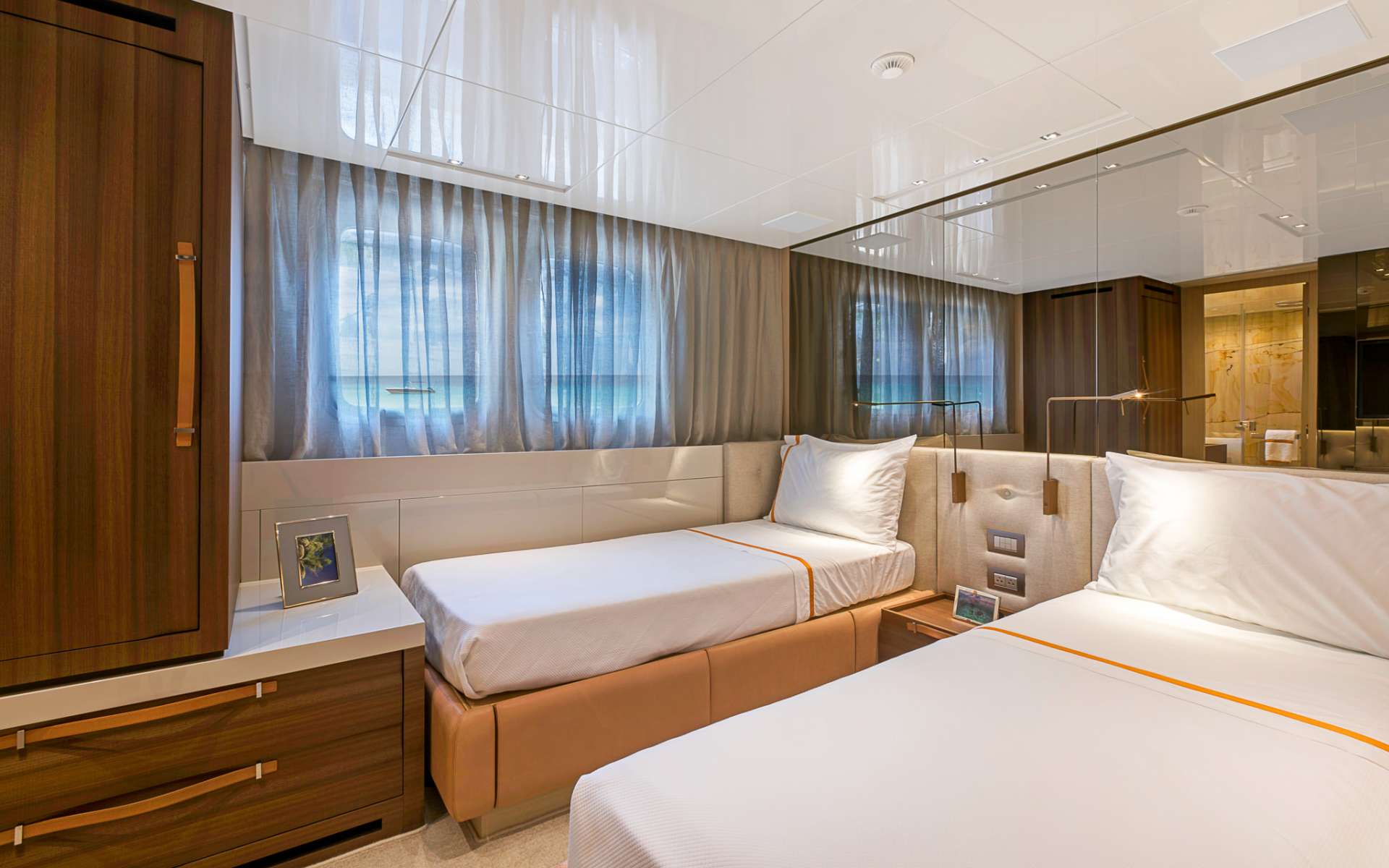 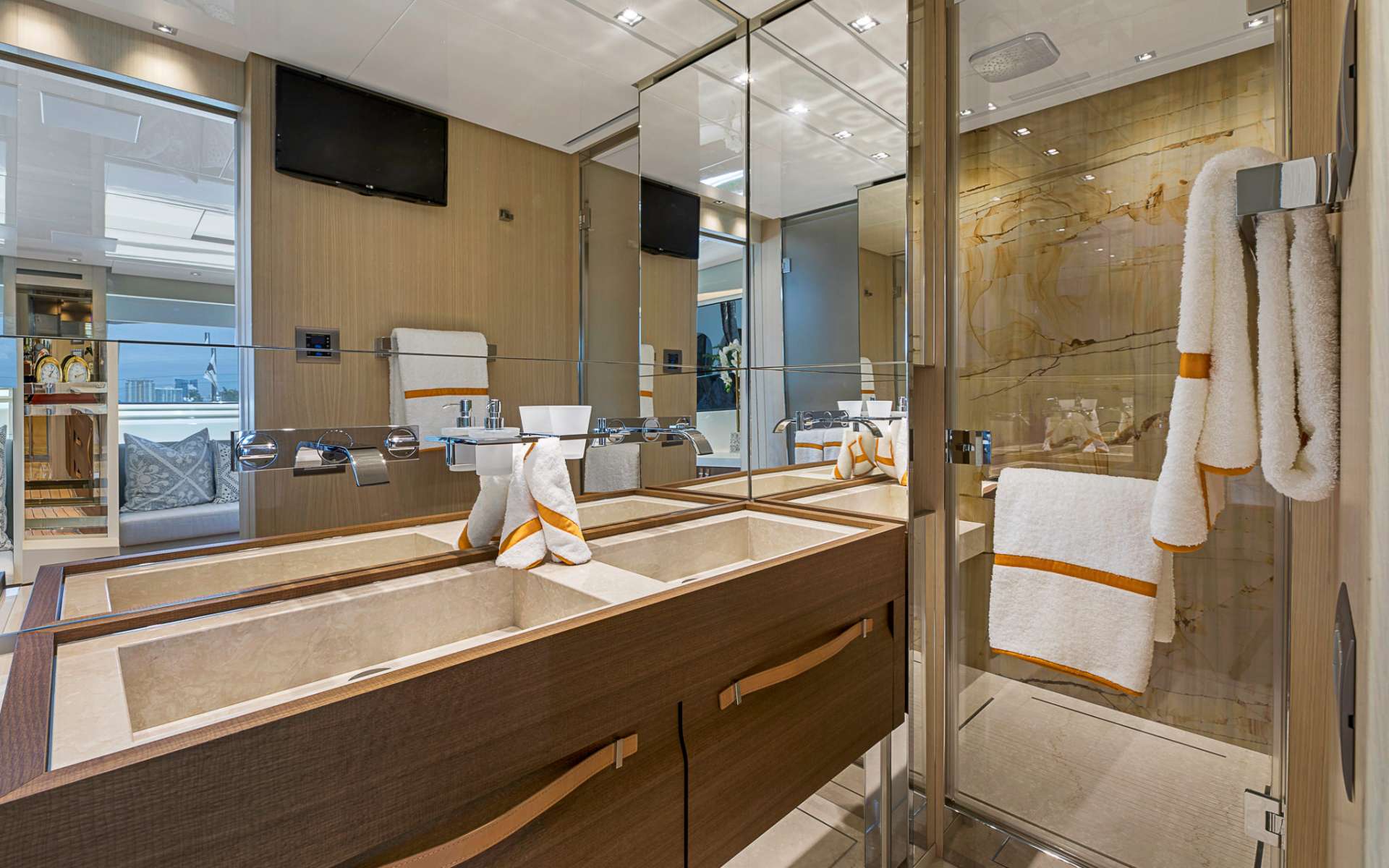 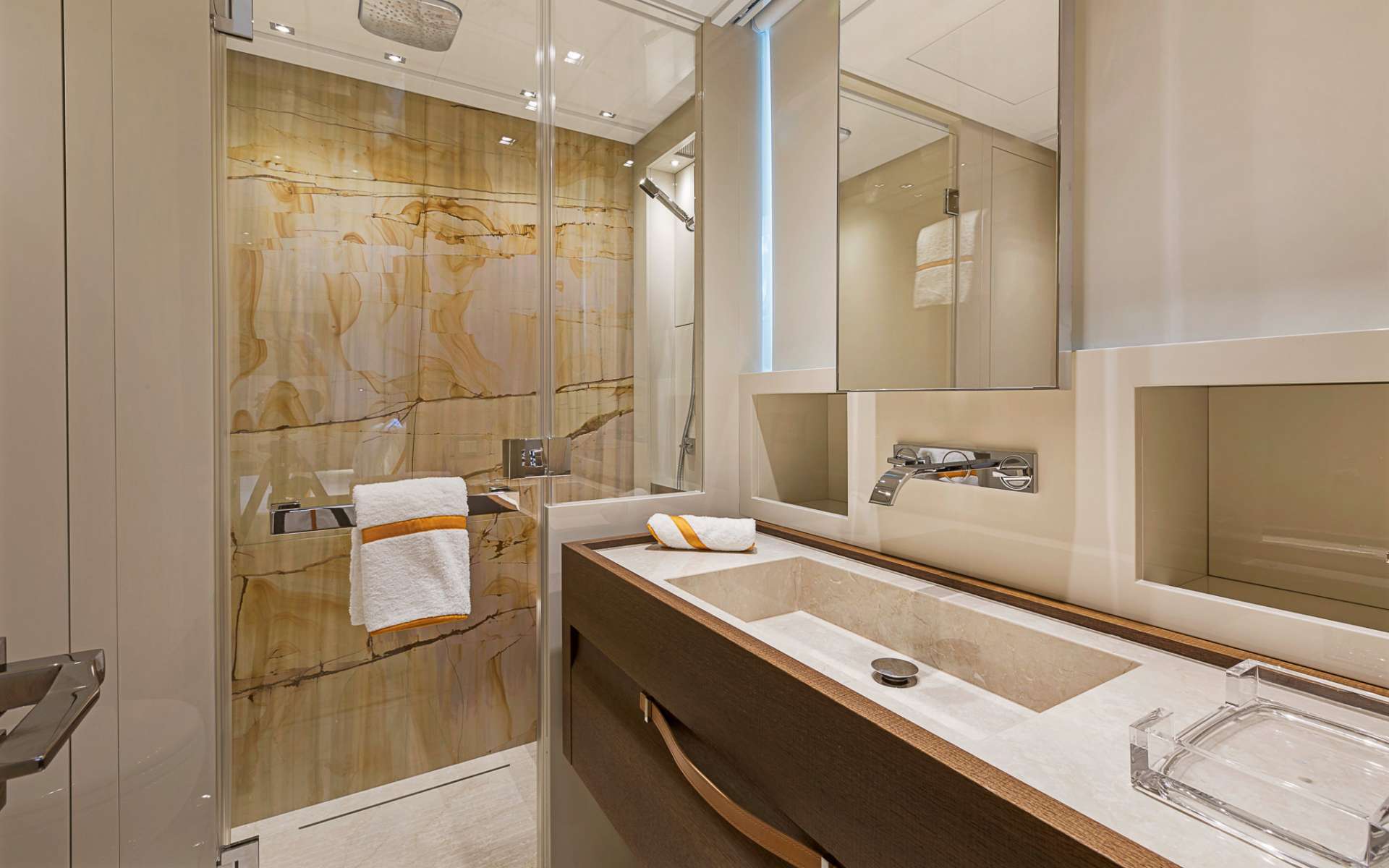 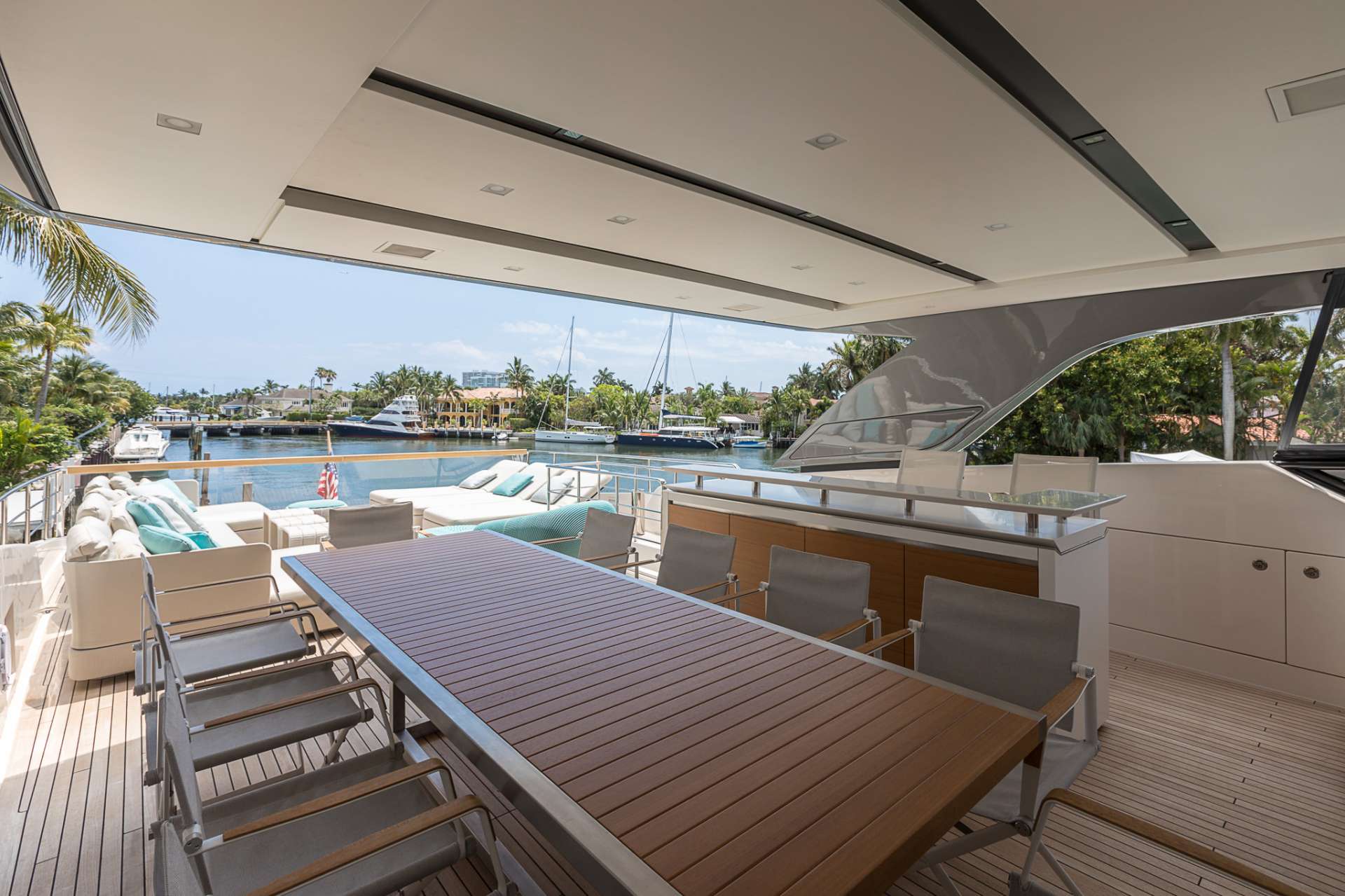 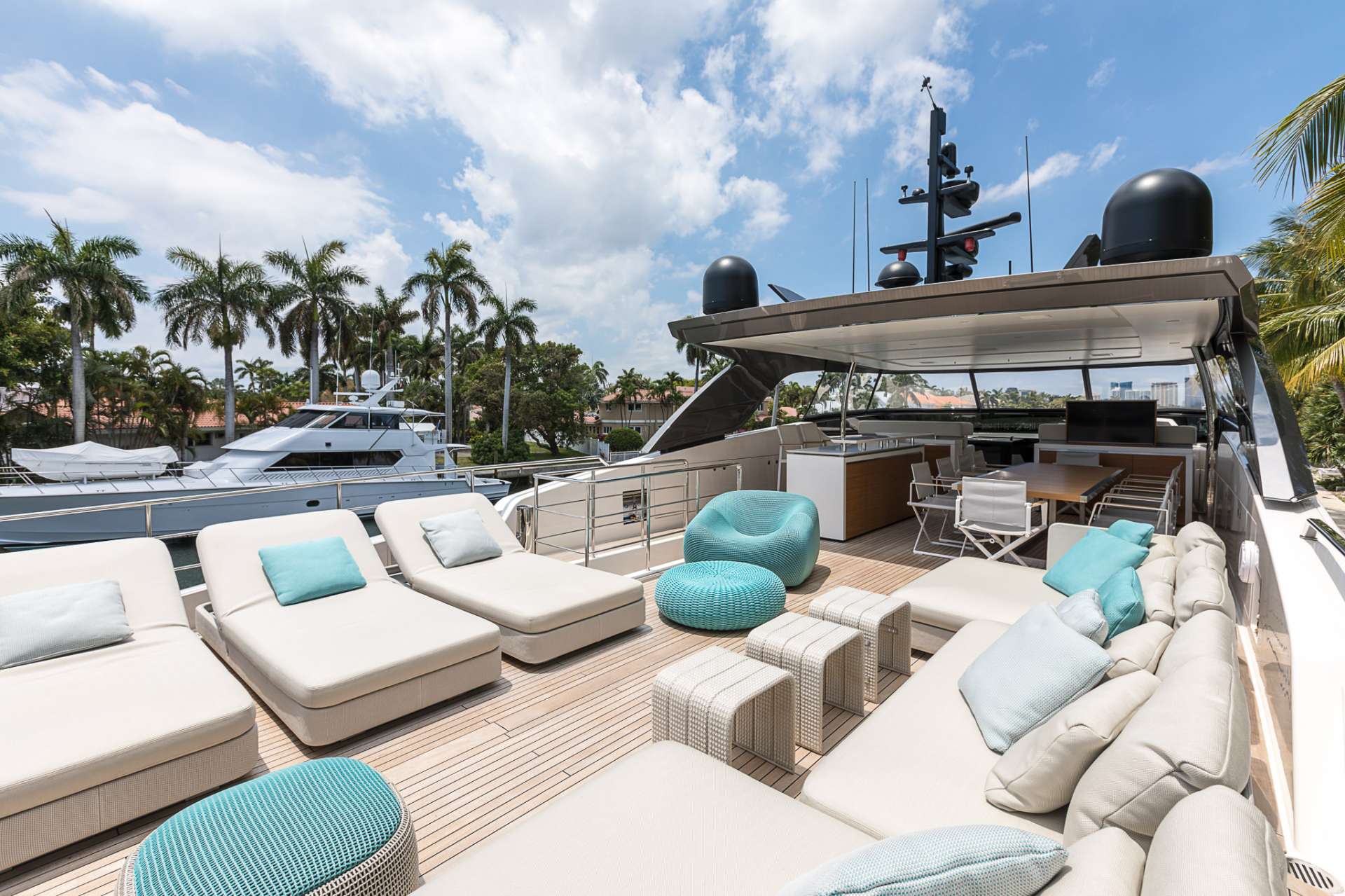 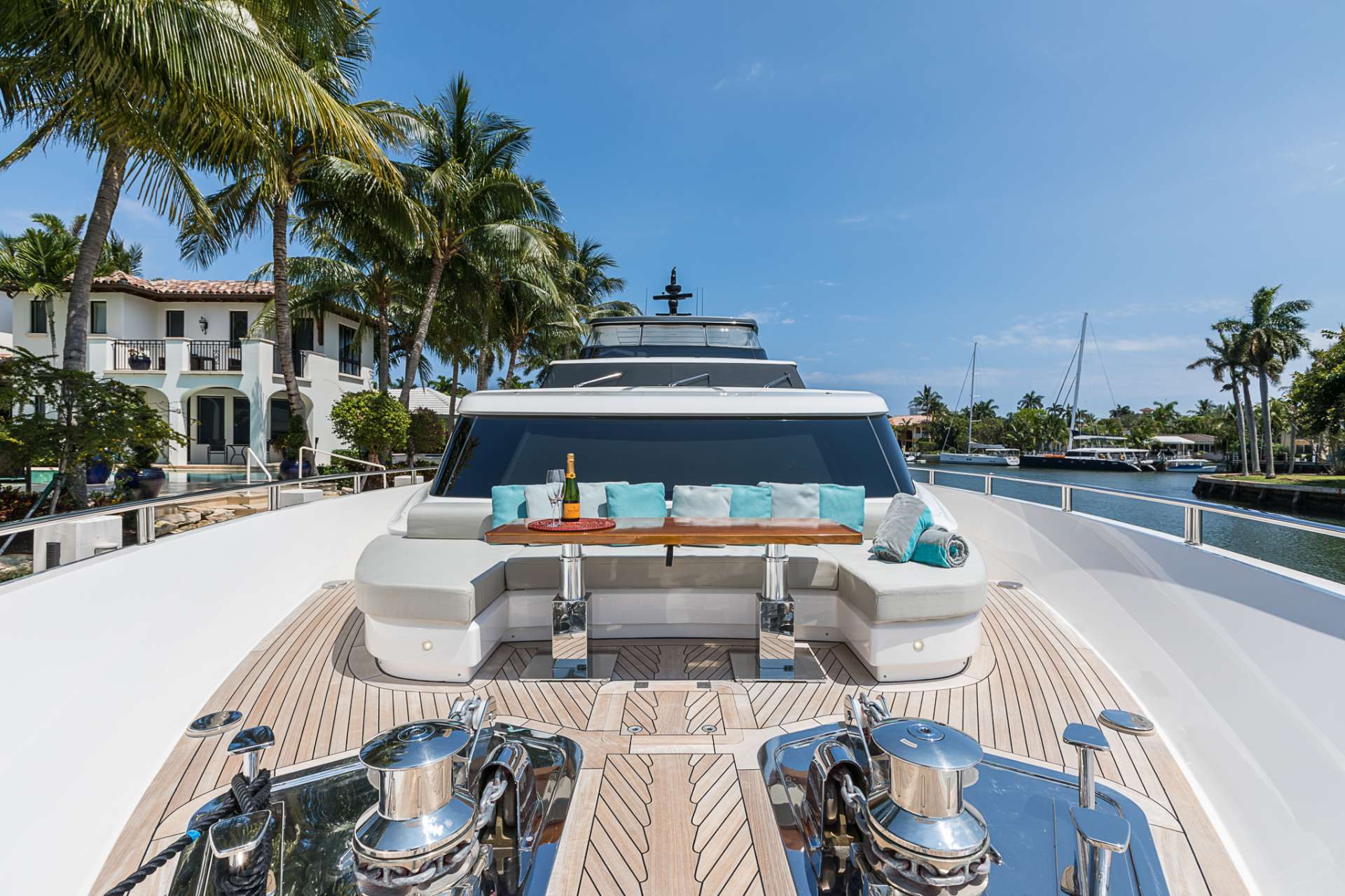 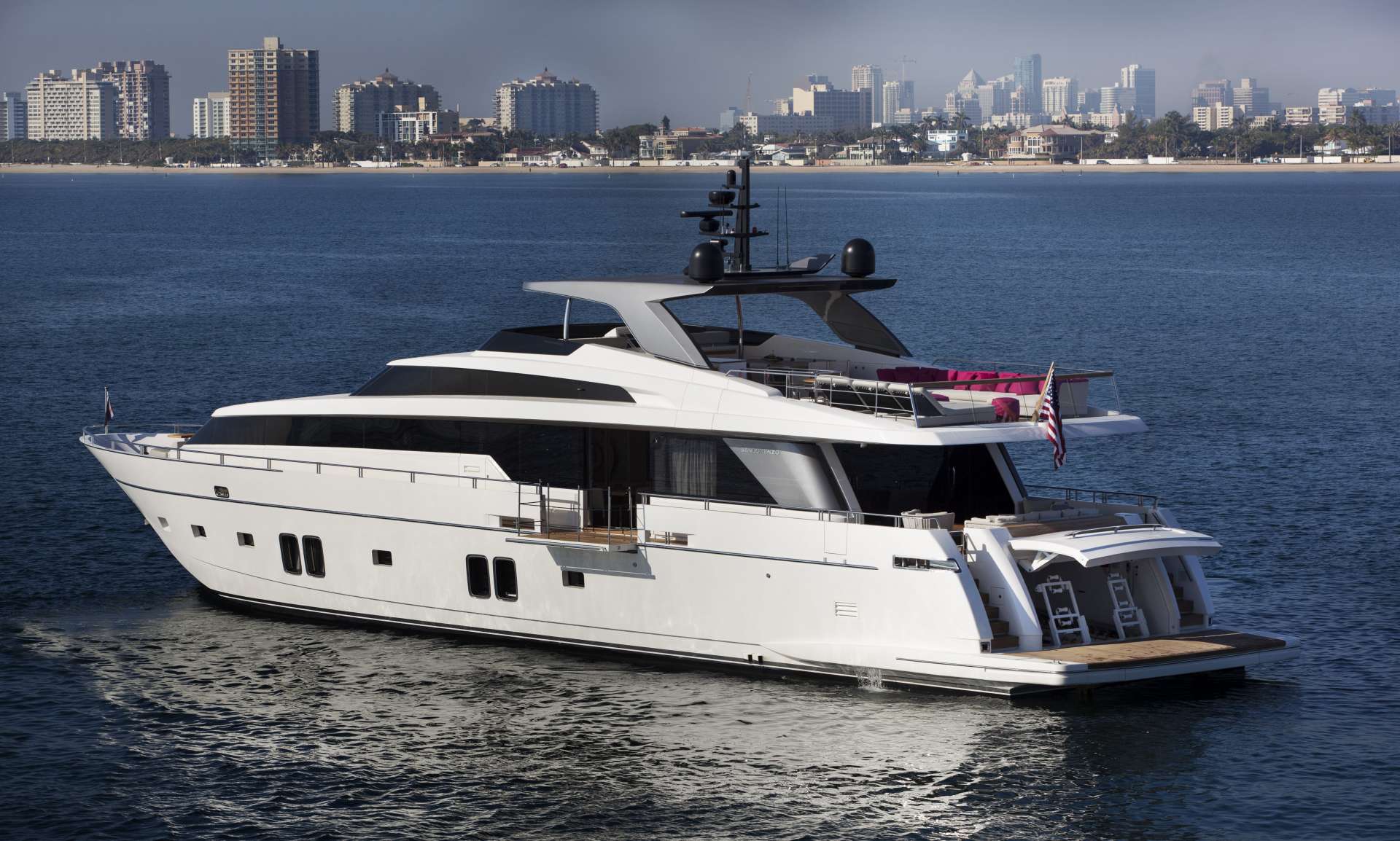 Captain Kelly J. Gordon, or just “Kelly” as most know her, is an accomplished motor yacht captain whose start was far from the water as she grew up on a farm in small town Indiana. It was her drive to succeed, learn, and thirst for adventure that led her to a career in yachting. Her path into yachting was a unique one that started in Beaufort, North Carolina, where she now claims as home base, and has since allowed her to navigate many different seas.

Kelly most certainly takes pride in her ability as a motor yacht captain, but also has a soft spot for the young adult and especially those that come with questions. As a former chemistry professor, Kelly loves to teach and it is certain that she will always find a moment, or many, to share what she knows with others and looks to encourage and inspire those that dream of a career in the yachting industry.

BIO: Shawn Riera was born in Arizona but spent most of his childhood in Eugene, Oregon. He started boating at the age of 10, and at 15, he began working with Kings Fishing and Guide Service, where he assisted the captain and worked on charter bookings for fishing trips in the rivers, lakes and offshore waters of Oregon. He spent his summers surfing in California and working as a junior surf instructor, and his winters escaping to Mount Bachelor in Oregon for some snowboarding and backcountry skiing.

His father became a private chef aboard yachts several years ago, and After seeing where he could travel he decided that a career in yachting was the right move. His love of the sea, fishing and watersports pushed him to move to Florida where he could join the industry. His love of the ocean has grown over the past couple of years working on the decks of 30-40 meter yachts and learning from experienced captains. Currently, he is Mate aboard M/Y FREDDY. His ultimate goal is to become a captain, and he’s currently studying for his 100 ton Masters License through USCG. He looks forward to exploring more of the world, but up until now, the beauty of both the Bahamas and the Caribbean have captured his heart.


Chef: SHANE HUGHES (U.S.)
Chef Shane is part of the Freddy team with quite the background. Shane started his culinary career at the age of 15 in Hollywood, CA. It was here that it didn't take long for the executive chefs that he was working alongside to notice his ability and promote him to sous chef at the age of 17. Shane's time as a Hollywood set chef taught him the skill that would later prove an asset when he opened his own catering company. Shane was and is still highly sought after and has spent time as the private chef for Matthew McConaughey, Mark Wahlberg, Woody Harrelson and many of their colleagues. After a successful career as a Hollywood Chef and his immersion in the film industry he found himself as a chef on motor yachts. Like many of us, after he found that he could combine his skill with the ocean and boats it didn't take long for him to commit himself as a yacht chef. We will leave the rest of Shane's ability and skill to be discovered by you through his excellent cuisine and artistic ability.


Stewardess/Deckhand GIANNA MESI *freelance:
Gianna, or G, as she is also known as is from Chicago, IL, born and raised. She grew up on the Great Lakes and has been boating since she was little girl. G decided to make yachting a career in 2016 and over the last 5 years has grown her ability in the interior and exterior. G excels in the interior making sure that the guests have all of the comforts needed while maintaining a clean and elegant space. Her personality is of the most genuine and her wittiness is sure to make you laugh. G has worked with Captain Kelly on a number of boats as her stew and mate. Not only does she excel in the interior, but she excels on the exterior. G has developed quite the navigational ability in the Great Lakes and Inland Rivers and is continuing her growth on the ocean. She's also clever with some tools in her hands. There just isn't much that G won't do as she is always looking to learn a new skill and make sure that the rest of the team is able to run as efficiently as possible. You'll find her a delight to have inside taking care of you!