At Barrington Hall we provide motor yacht charters around the world on various luxury yachts. The Motor Yacht listed below, ODYSSEA, is one of the many motor yachts we offer for charter. Please contact us for up to date information on ODYSSEA or any other yachts in your desired location. 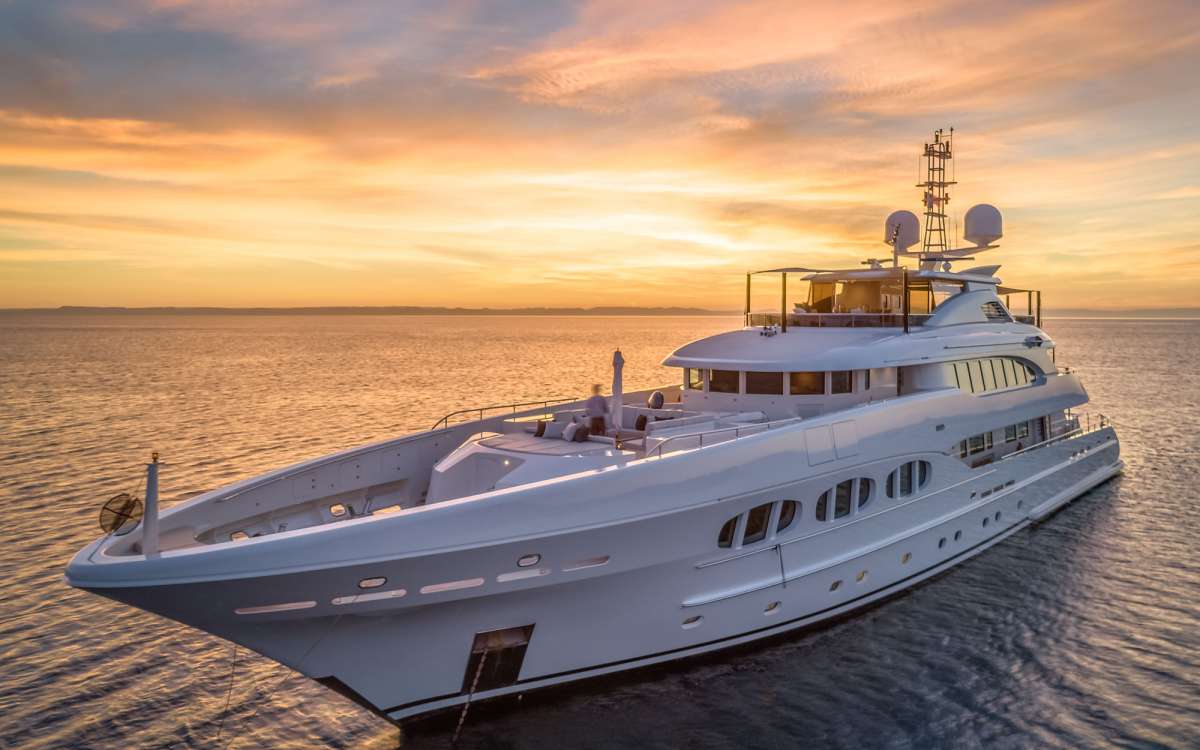 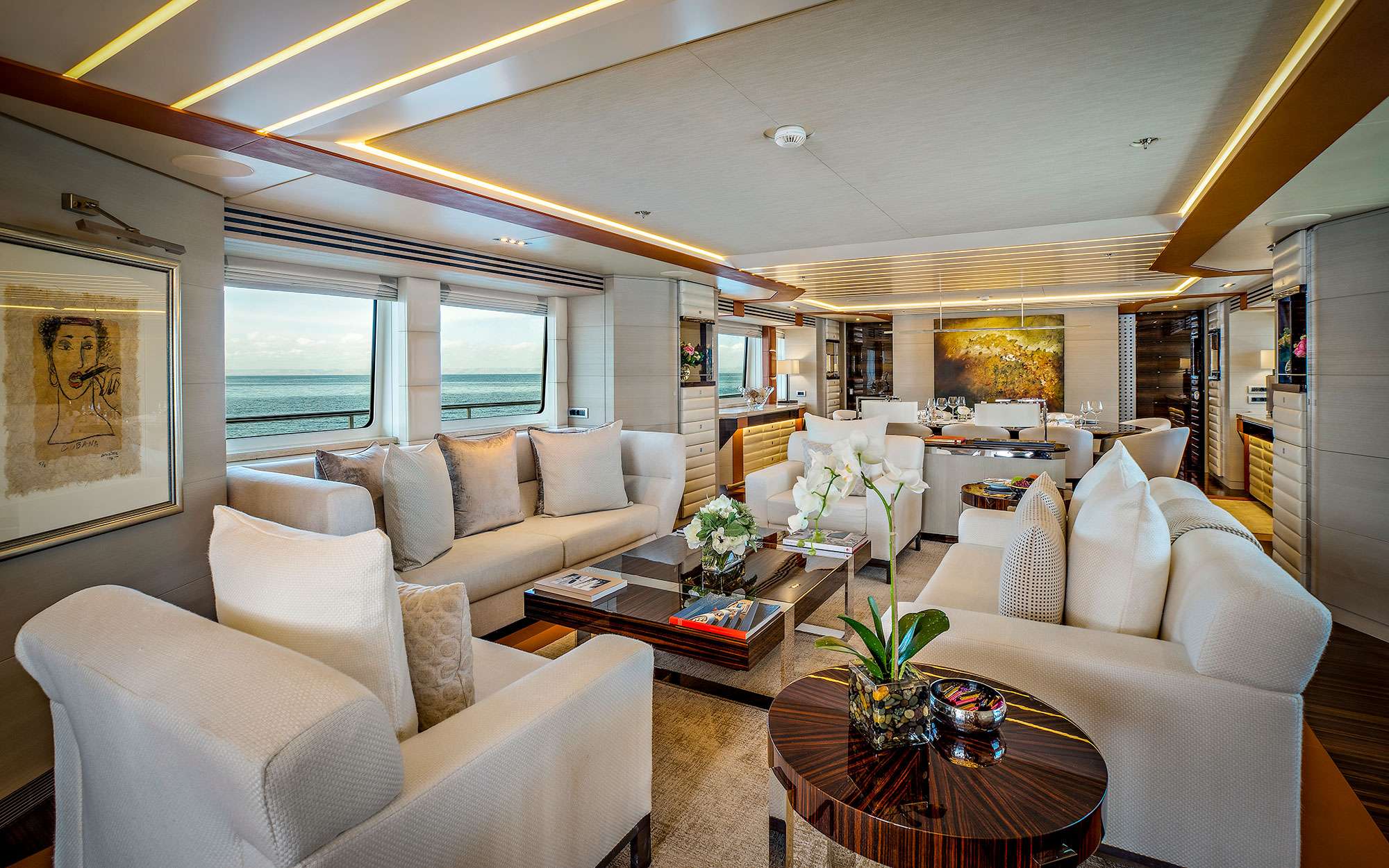 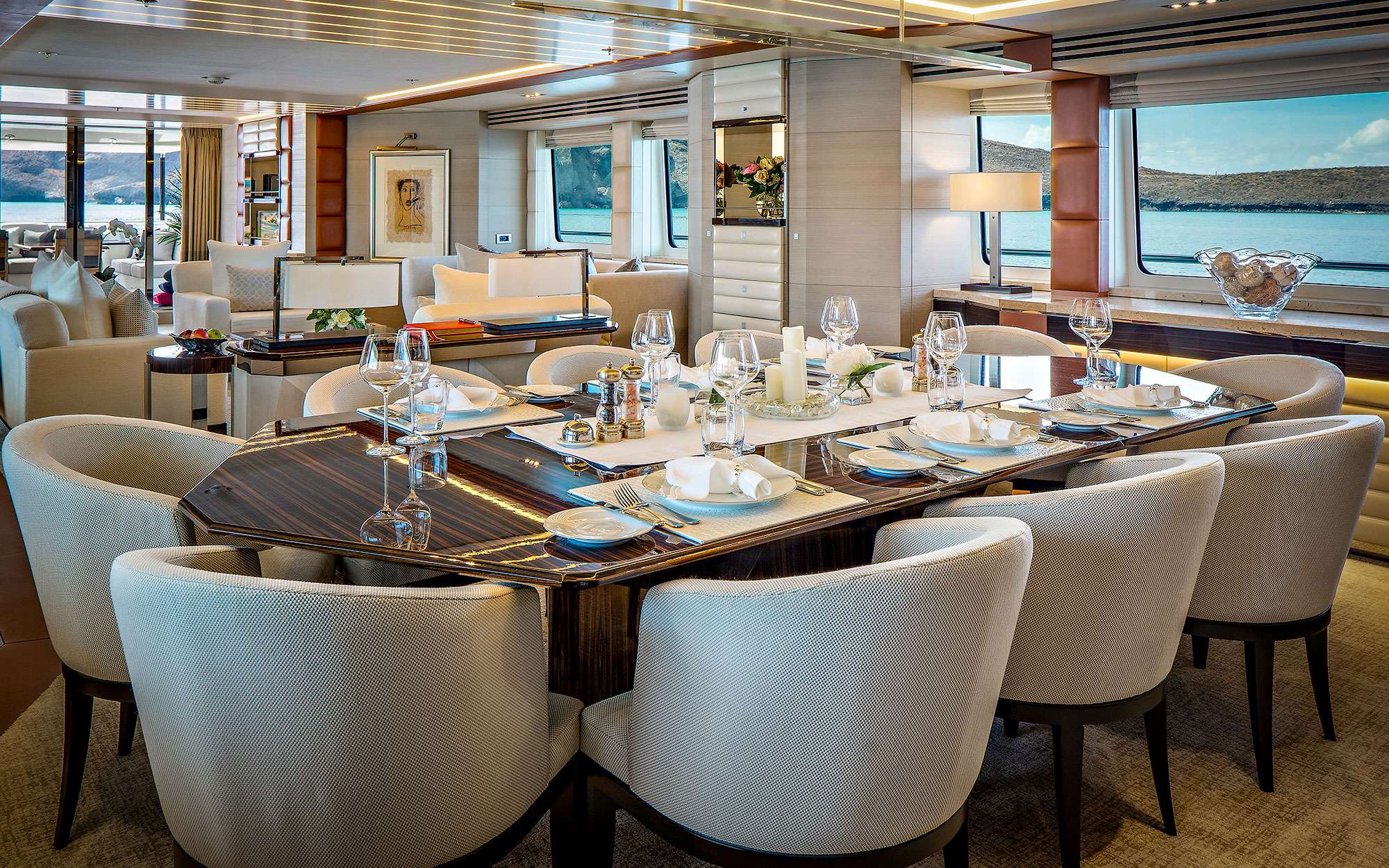 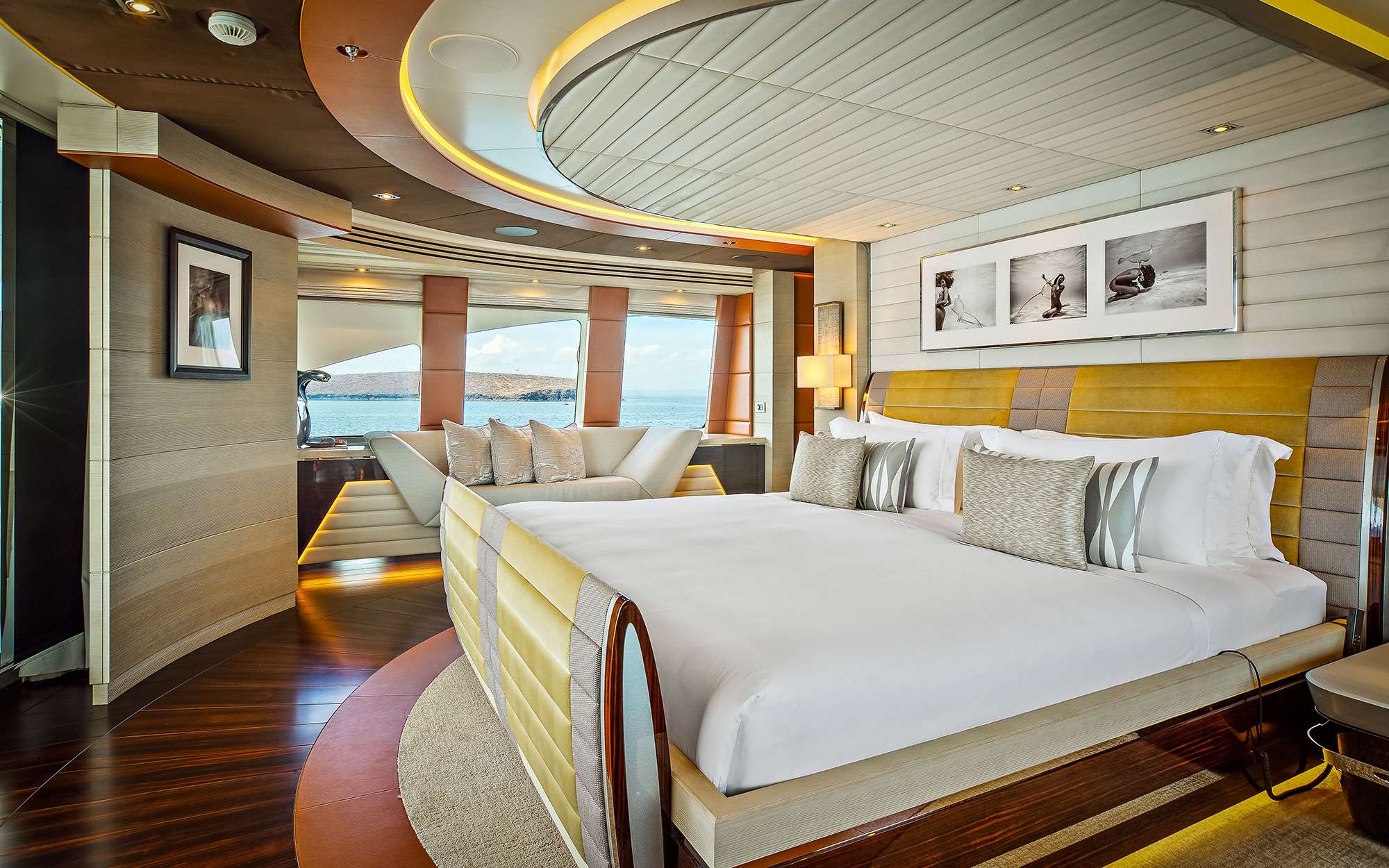 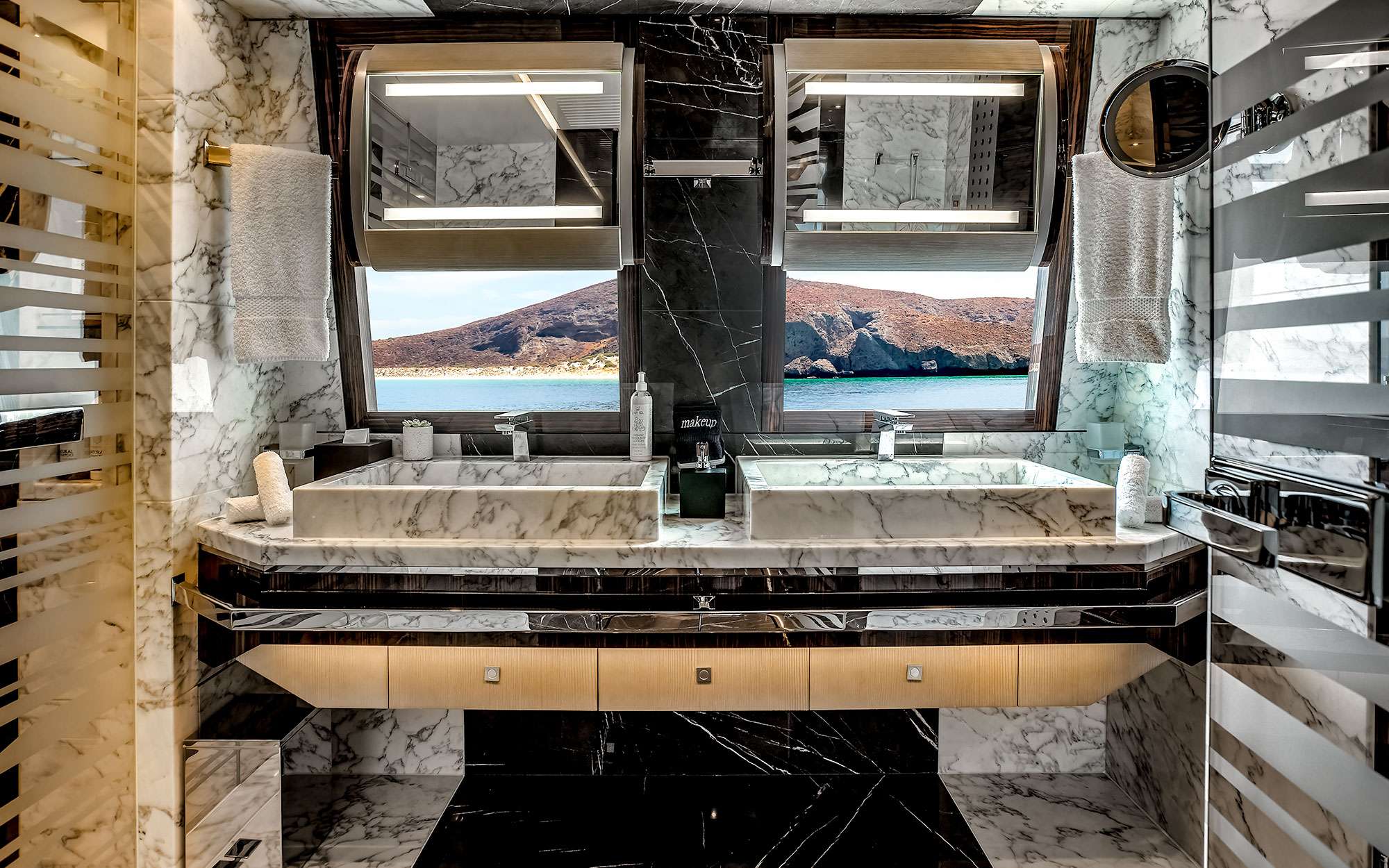 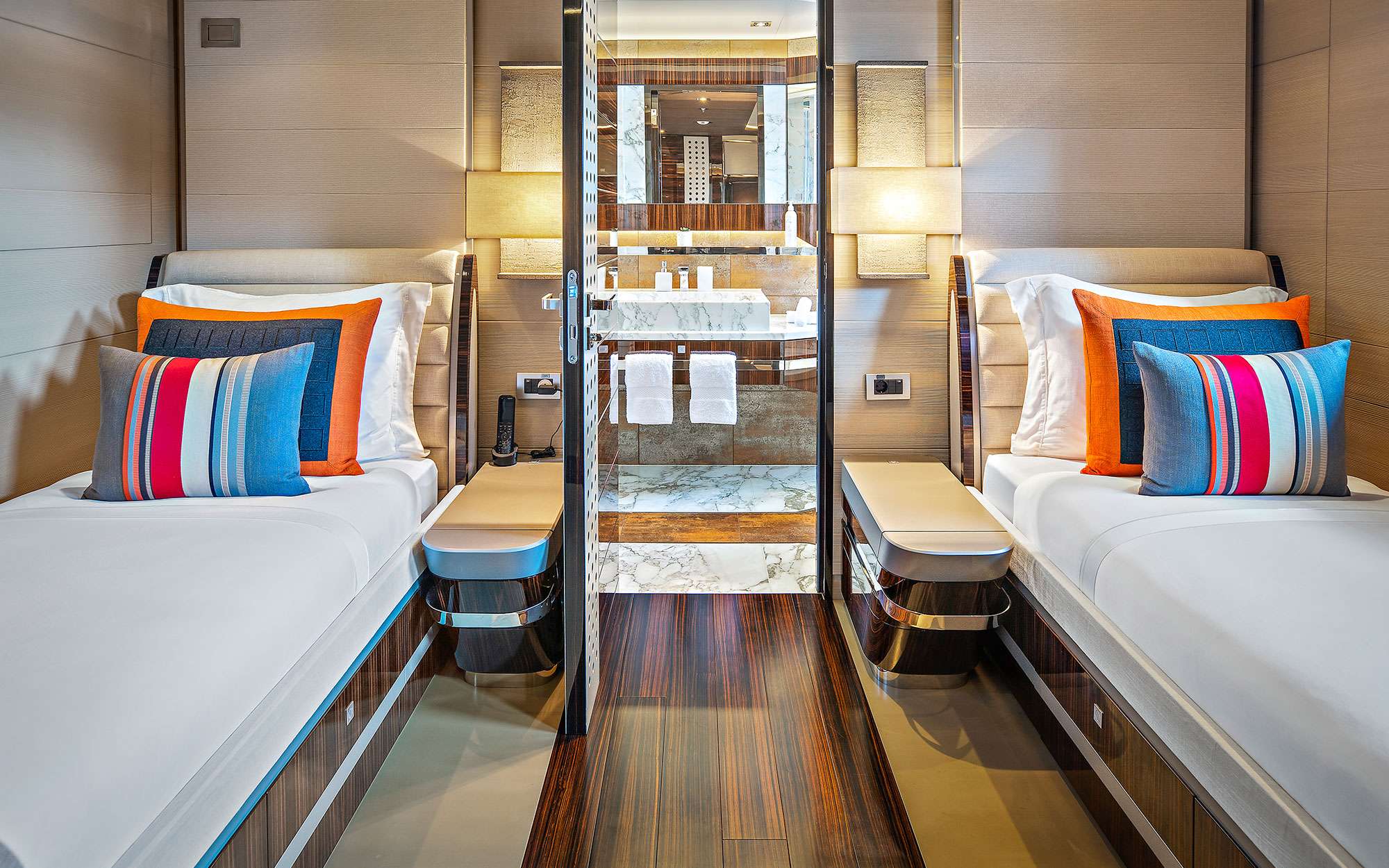 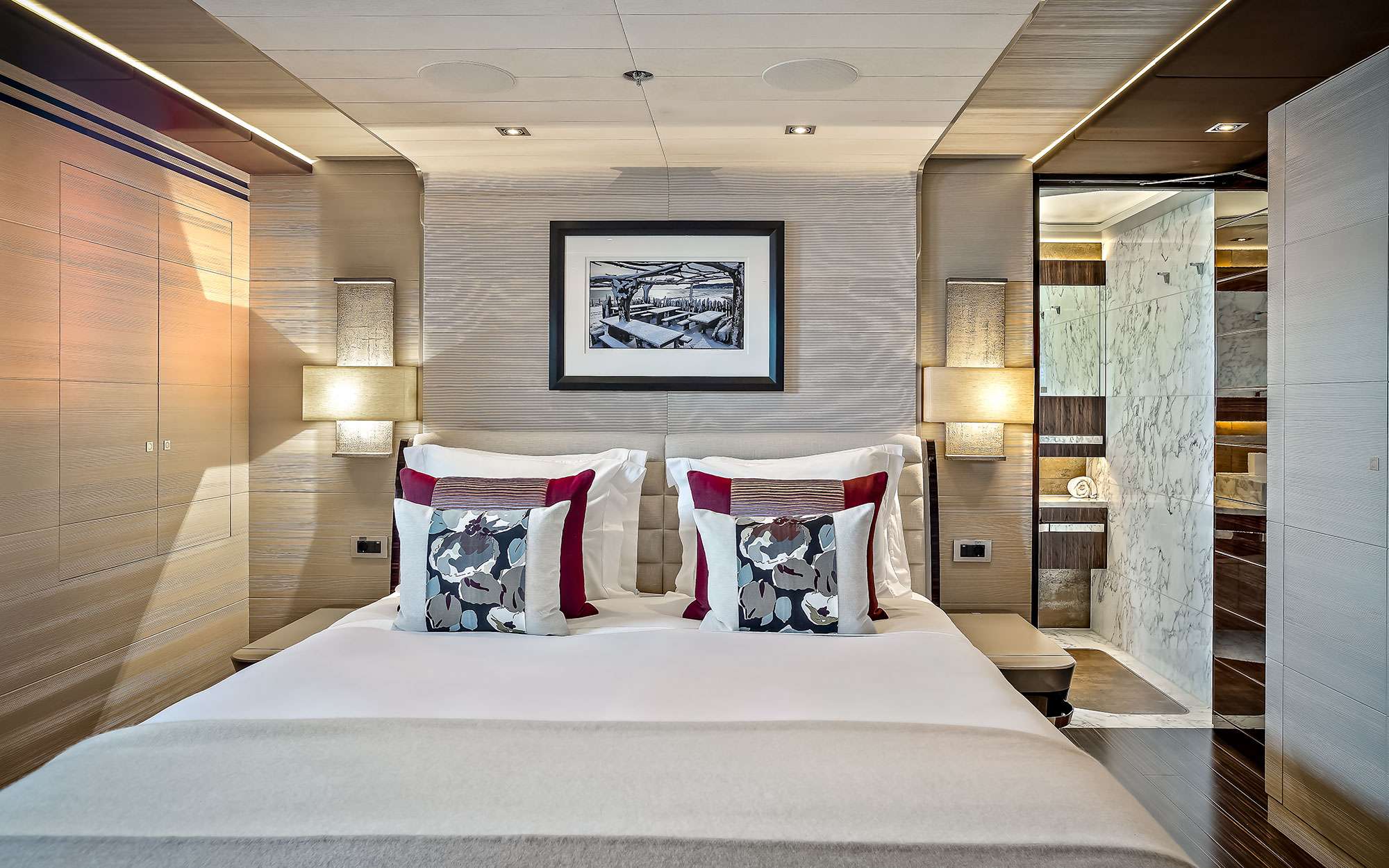 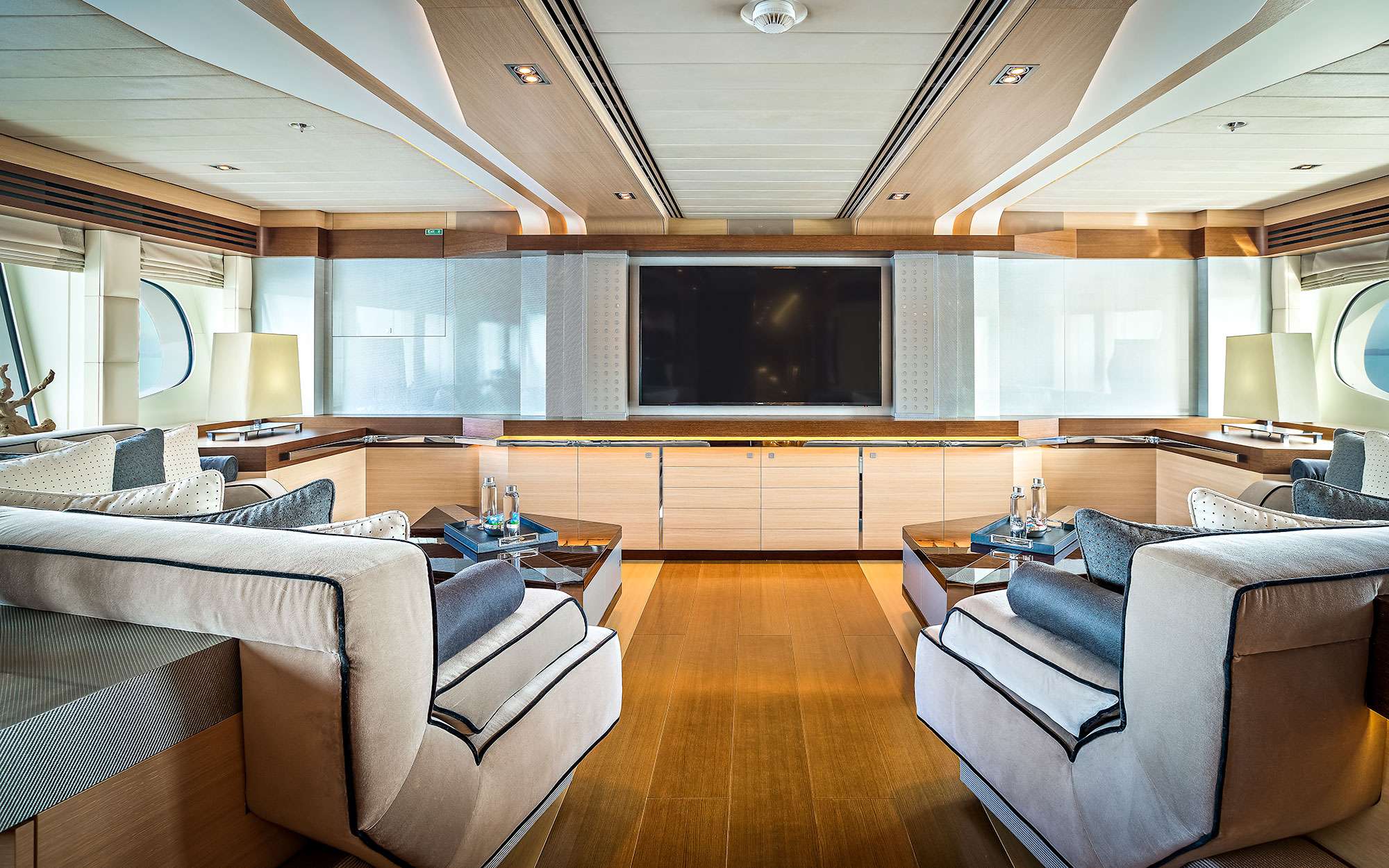 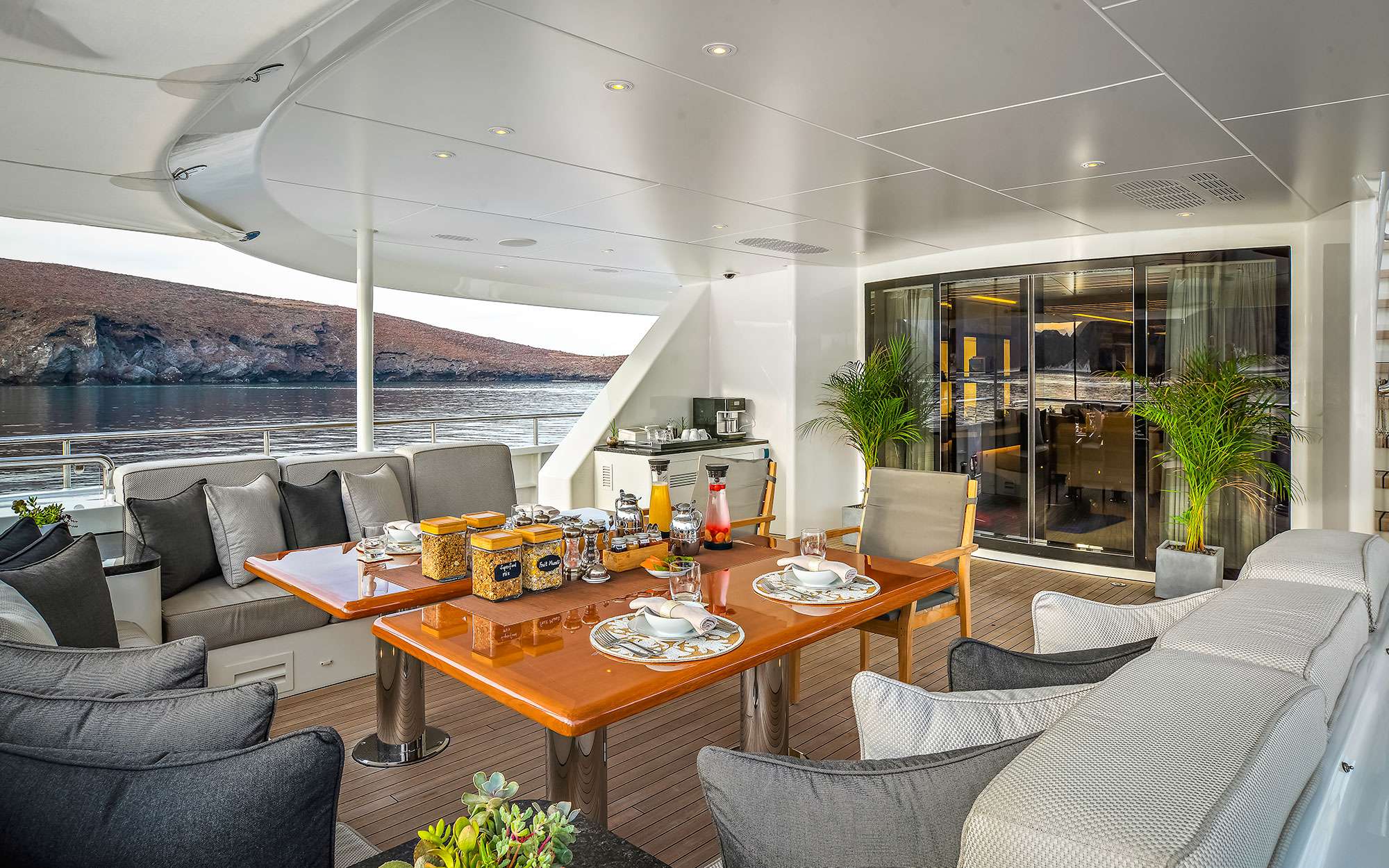 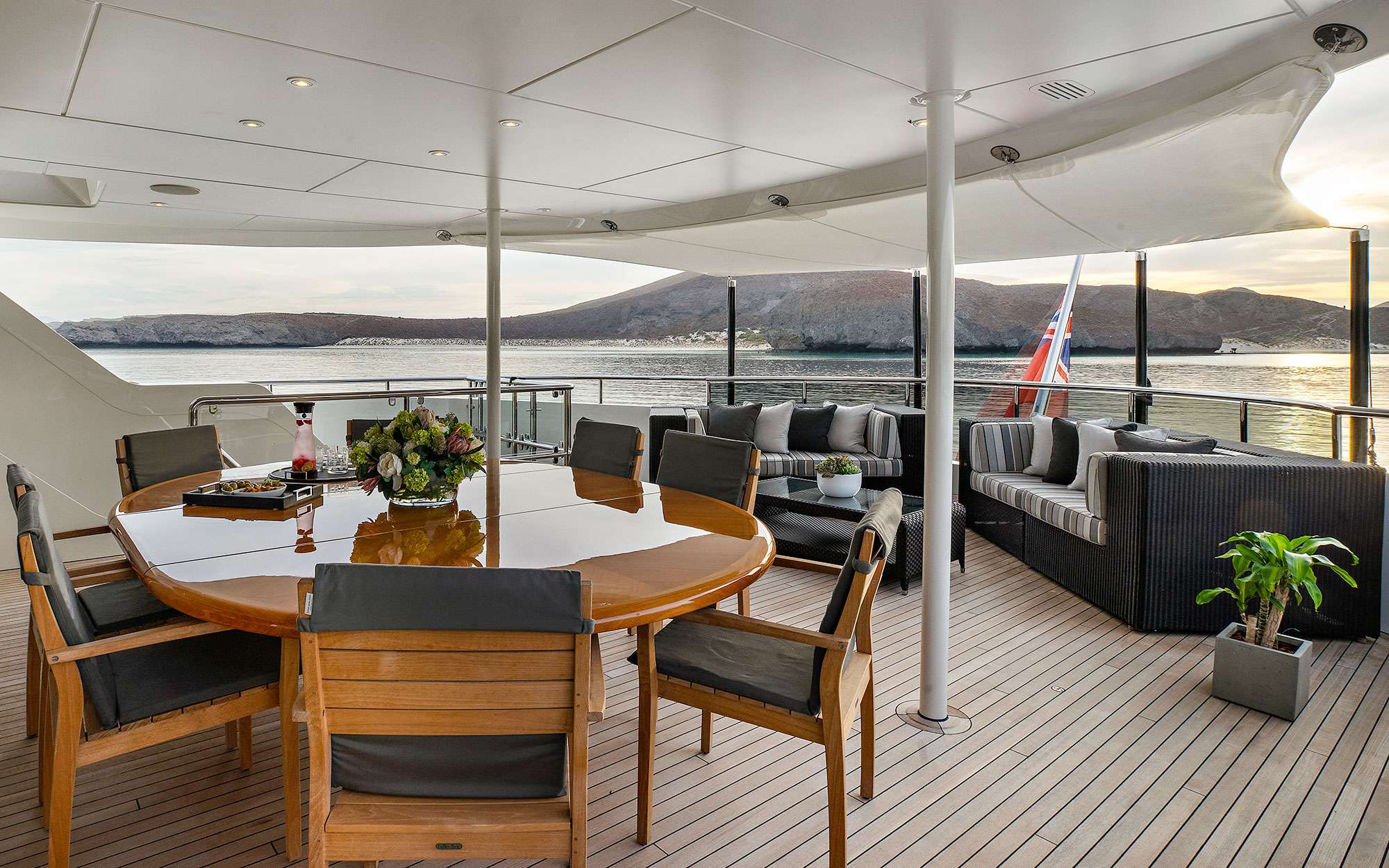 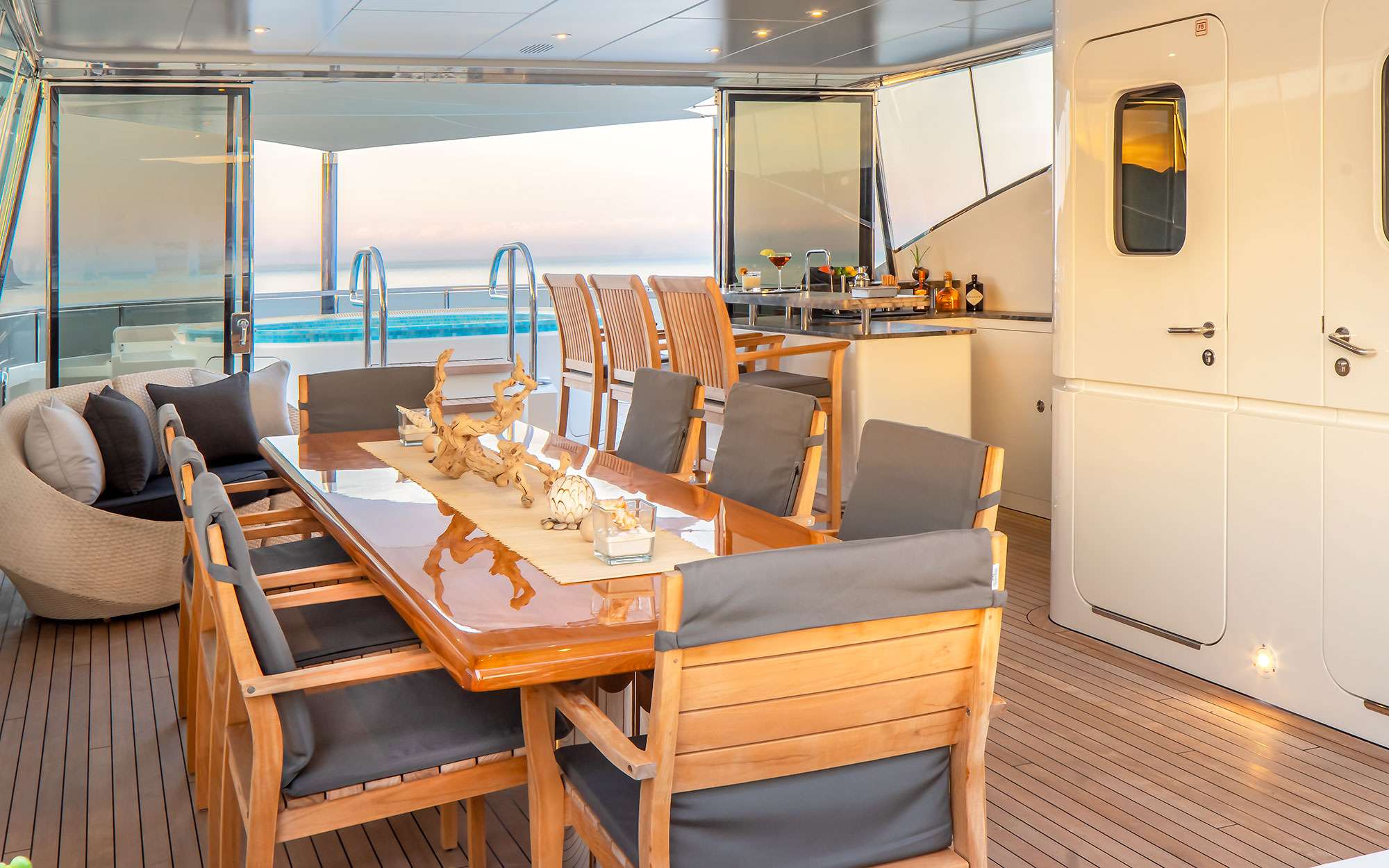 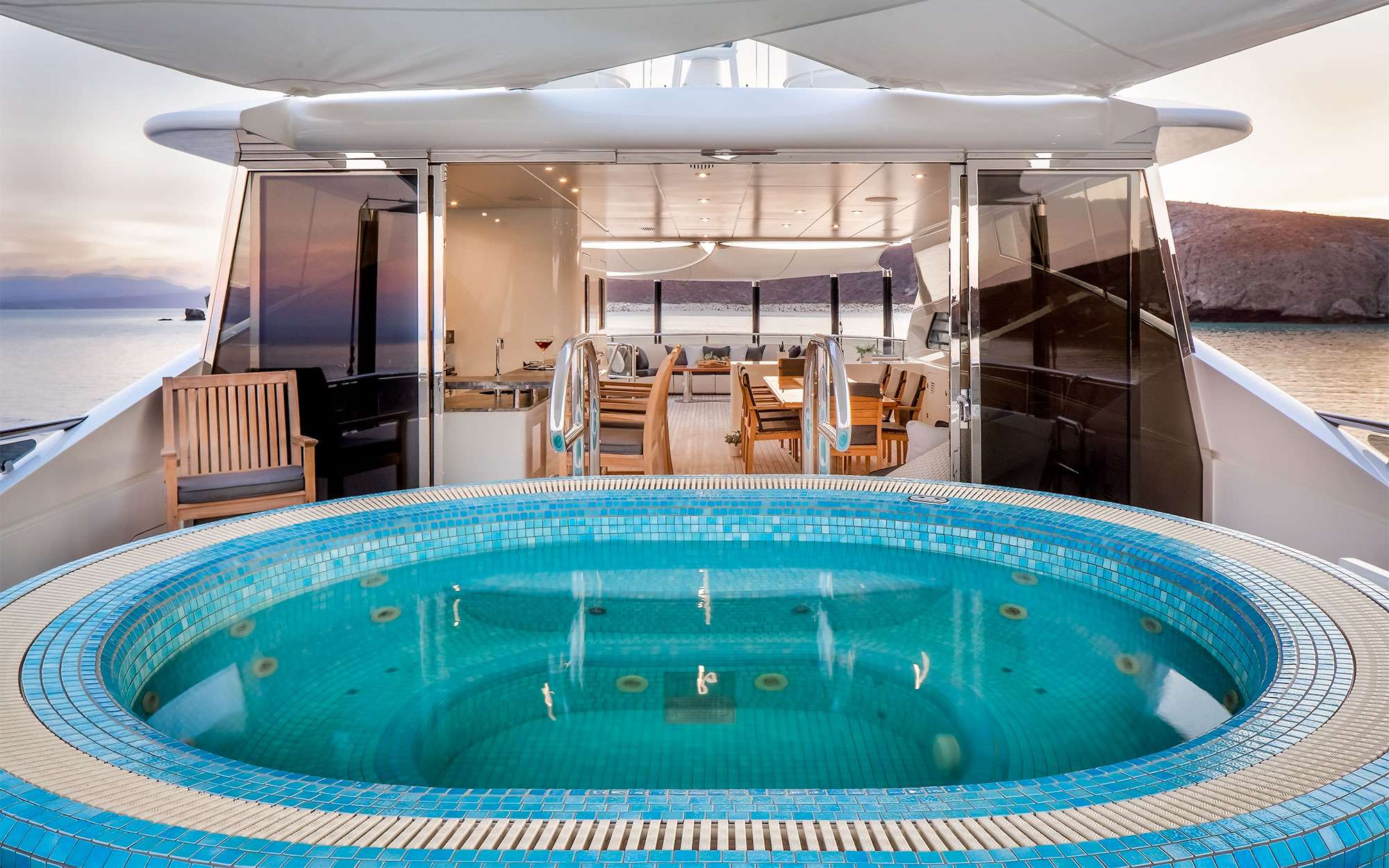 Crew Profile
CAPTAIN | Chris Seago (South African)
A KwaZulu-Natal born and raised adrenaline junkie, who spent his high school years building a 32ft sailboat with his family and set sail to greater horizons after high school. From island hopping in the Caribbean, Bahamas and South Atlantic to settling in Fort Lauderdale. Chris joined the yachting industry late 1993 where he met his wife of 18 years & still happily married and in love. Chris got out of yachting for 6 years to raise a family and moved to Canada where he flipped houses. He has since moved back with his family and has resided in Fort Lauderdale for the past 8 years. When Chris is not at home spending time with his wife, 2 kids, 2 cats and 2 dogs – you’ll most certainly find him kiteboarding, cycling or dirt biking. Chris joined M/Y Como in April 2017 in France, and stayed aboard through the sale and transition to ODYSSEA with the current owners.

ROTATIONAL CAPTAIN | Duncan Stephenson (South African)
Duncan was born and raised in Cape Town, South Africa. Duncan's love of the water started at a young age when he learned to sail on dinghies. He has been hooked on the water ever since. He joined the yachting industry in 2003. When he's not pottering around on the water, he's rebuilding homes and spending time with his wife and young daughter. Duncan is easygoing and has a calm, genuine personality. His experience, meticulous attention to detail, excellent communication skills, and keen understanding of the charter industry means that MY ODYSSEA and her guests are in safe hands at all times and will have an amazing charter experience.

HEAD CHEF | Brian Kremer (Canadian)
Born and raised in the heartland of Canada, Brian grew up playing hockey and going snowboarding in the Rocky Mountains. His first interest in cooking came at a young age when his mother got him to help prepare family meals to try to resolve his problem of being a picky eater. He moved to Vancouver Island on the west coast to attend culinary school and to escape the freezing winters of Alberta. It was there he fell in love with the ocean, going surfing, sailing, and going to the beach any chance he could. After completing schooling, he took off to Europe for a year and a half to cook and eat his way around the continent. Will a full belly and an empty wallet, he returned to Vancouver Island where he worked his way up the culinary ladder at some of the best restaurants in Victoria, BC. Throughout this time, he adapted a cooking style that focuses on sustainability, using what is available and in season. Brian joined yachting at the start of 2020 with the goal of combining his love for cooking, travel and the ocean and has not looked back since.

ENGINEER | Erik Aubry (Canadian)
Canadian engineer, born and raised in Trois Rivières. Erik studied mechanical engineering in Québec and worked in the field for a few years. However, it wasn't long before the travel bug got hold of him, urging him to leave land behind and take on the big blue seas. Joining the yachting industry in 2009, Erik worked his way up to chief engineer, while running his own yacht repair company for over 3 years. He strives to provide the smoothest of sailing to every boat he works on. Erik joined ODYSSEA in the month of May 2020, in Cabo San Lucas, Mexico. Erik is a lover of ice hockey and quite the coffee-aficionado.

ENGINEER | Rowan Domleo (South African)
Rowan was born on a farm in Midlands KwaZulu-Natal, South Africa. Rowan and his older brother have always been two peas in a pod and enjoyed activities such as fishing, spear fishing, martial arts or anything that gets the heart rate up and going. He also has a 5-year-old twin half brother and sister. Growing up on a farm, Rowan learned how to fix things from a young age and so it was a natural career path to join the world of engineering. Rowan joined the yachting industry in 2010 and has been aboard ODYSSEA since August 2019. Whenever Rowan isn't having a Coca Cola, you'll find him enjoying fixing things that other people broke.

FIRST OFFICER | Hayden Laubscher (South African)
Hayden is from Johannesburg, South Africa. He grew up fishing, cycling, and pretty much doing any sport he could get his hands on. As time went on golf and fishing soon became his favorites, but it doesn't stop him from having a friendly game of football or touch-rugby whenever the opportunity arises. After school he followed in his father and brother’s footsteps and studied Accounting. A craving for the outdoors always had him staring out the window, looking for his next big adventure. Now, living his dream of working outdoors, Hayden has enjoyed every minute of his yachting career, and always pushes himself to learn more and give all guests the best possible experience. Hayden joined ODYSSEA in May 2018 and has loved every minute ever since.

BOSUN | Laurie Meintjies (South African)
Laurie is a South African-raised, health and fitness enthusiast. He grew up in Somerset West and has always had a strong drive to perform and keep active. Laurie has a great passion for life and has traveled to Indonesia, Fiji, Australia, Turkey, Singapore, Costa Rica, Palma, Malta, Brazil, St Helena and is excited to discover new countries while he progresses in his career. He was introduced to yachting by a friend in the industry and immediately went full throttle making his way across the archipelago of the world. His interest and hobbies consist of playing piano, trading forex, living on the ocean, calisthenics, and watersports. Laurie loves anything that raises his adrenaline and is always ready to get involved in a new, exciting adventure. He is eager to use his skills learnt over the past 3 years in yachting to bring enjoyment to all.

DECKHAND | Morgan Hill (Canadian)
Morgan is from PEI, Canada. Growing up in the four seasons of the Atlantic northeast offered a variety of surroundings. This included the provinces main industries of fishing, farming and tourism. After his first taste of life at sea, lobster fishing in 2018, he decided to skip another frigid winter and further develop his skills in warmer waters. Morgan joined ODYSSEA in January 2022 and is excited to progress in his career, as he learns more about the deck department. When Morgan is not hard at work you can find him working out, singing along to songs with his guitar, and exploring the outdoors.

CHIEF STEW | Haley de Jager (South African)
Hayley is from Johannesburg, South Africa, where she completed her Honors degree in Psychology. She worked in a Center for Autism for 2 years and spent a lot of time volunteering at a Crisis Call Centre and a Community Youth Development Organization. Hayley started her yachting career in April 2018 in the beautiful city of Antibes. Like many of the crew aboard, Hayley loves being active and chooses to lead a healthy lifestyle filled with outdoor explorations. Hayley has a passion for animals and loves every moment spent with a furry friend. She developed a great love for travel and the ocean while on family vacations, which were mostly oriented around scuba diving and learning about new cultures. She takes great pride in her work and hopes to use her passion in hospitality to ensure all guests have a once-in-a-lifetime experience onboard.

STEWARDESS | Dazzle Krasle (American)
Originally from Athens, Georgia but a citizen of the US, Canada and Portugal, Dazzle spent her summers and winters growing up on her family's fruit orchard in British Columbia, Canada or visiting her family's village in Northern Portugal. After high school she returned to Canada where she acquired a degree in Anthropology and an education on beautiful Vancouver Island. Island life surely solidified her love for the sea as she spent her free time camping, surfing, free diving, and has a hula hoop that never leaves her side. One fun fact is that she can solve a Rubik's cube! She has also lived, worked and studied in Europe, Asia and Australia where she worked as a travel agent before joining the yachting industry 2 years ago. Through yachting she has been able to travel and work with people from all over the world, while being part of an amazing team that offers guests an unforgettable vacation with a dazzling touch!

STEWARDESS | Camielle Bertsch (American)
Camielle is from Minneapolis, Minnesota, and spent much of her time growing up on a few of Minnesota’s 10,000 lakes. She attended Bradley University in Peoria, Illinois, and received her Bachelor of Science degree in Marketing and International Business. While in school, and for three years after graduating, she gained extensive hospitality experience in the restaurant industry working as a server and manager, as well as doing reservation and large event coordination. Being raised in the frozen tundra turned Camielle into a winter sports enthusiast. She has been a figure skater for fifteen years, with a seven-year coaching background, and is an avid skier and snowboarder. She recently made the transition from the Midwest into yachting to broaden her travel horizons and take her hospitality background to the sea.
Motor Yacht Charters, By BHC
2805 East Oakland Park Boulevard #397
Fort Lauderdale,  Florida,  33306
Local Phone: 954-720-0475
Tollfree: 800-478-2029