At Barrington Hall we provide motor yacht charters around the world on various luxury yachts. The Motor Yacht listed below, NITA K II, is one of the many motor yachts we offer for charter. Please contact us for up to date information on NITA K II or any other yachts in your desired location. 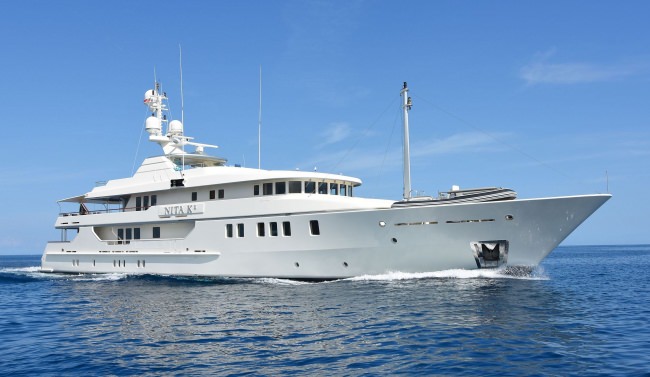 Low Price: $250,000  High Price: $275,000
Length: 170.07Ft
Beam: 29.11 Ft
Draft: 10Ft
Year: 2004
# Crew: 13
A/C: Full
Guests: 12
Cabins: 5
King: 1
Queen: 4
Double: -
Single: -
Twin: -
Pullman: 2
Builder: Amels
Refit: 2014/2016
Accommodations: NITA K II sleeps up to 12 in the charter party in 5 staterooms with crew accommodations for up to 14 in 7 cabins. The Master stateroom is full beam on the main deck with his and her bathrooms. There are two VIP staterooms with Jacuzzi bathtubs in each bathroom and then two aft staterooms with showers in each bathroom. A Pullman has been added to each of the aft staterooms. There is a sleeper sofa in the Master Lounge area to allow for additional sleeping options. 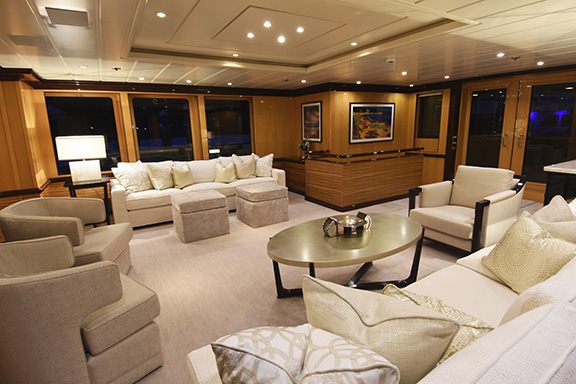 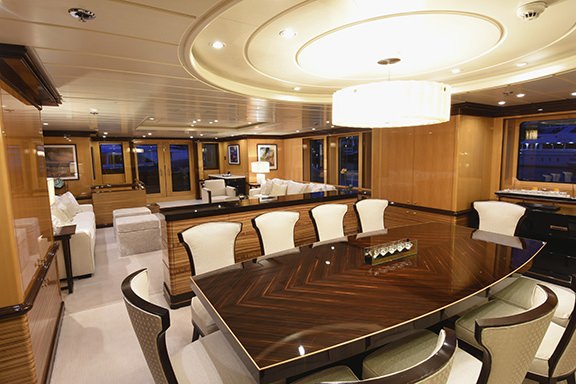 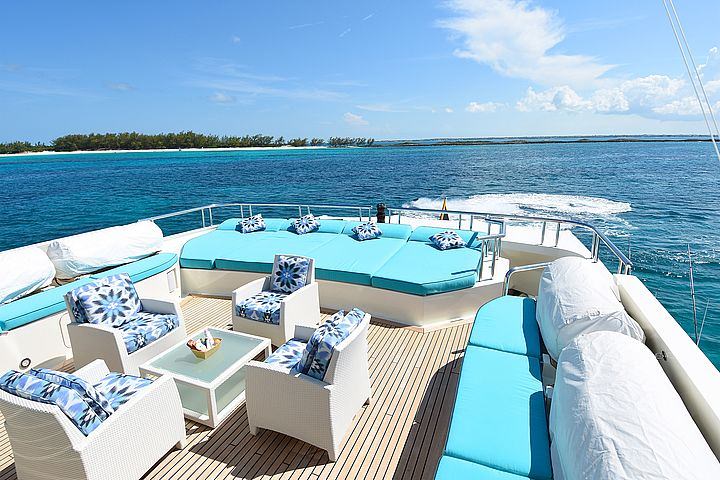 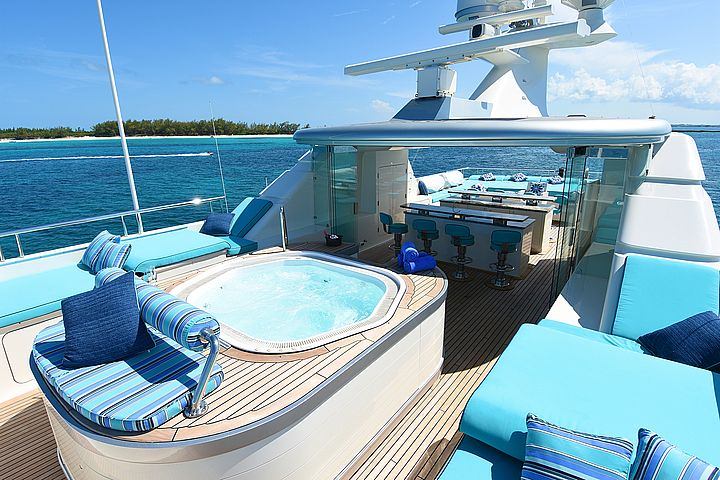 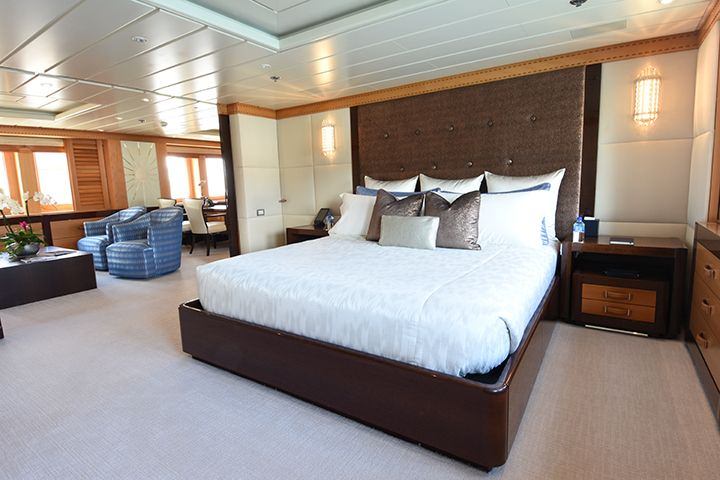 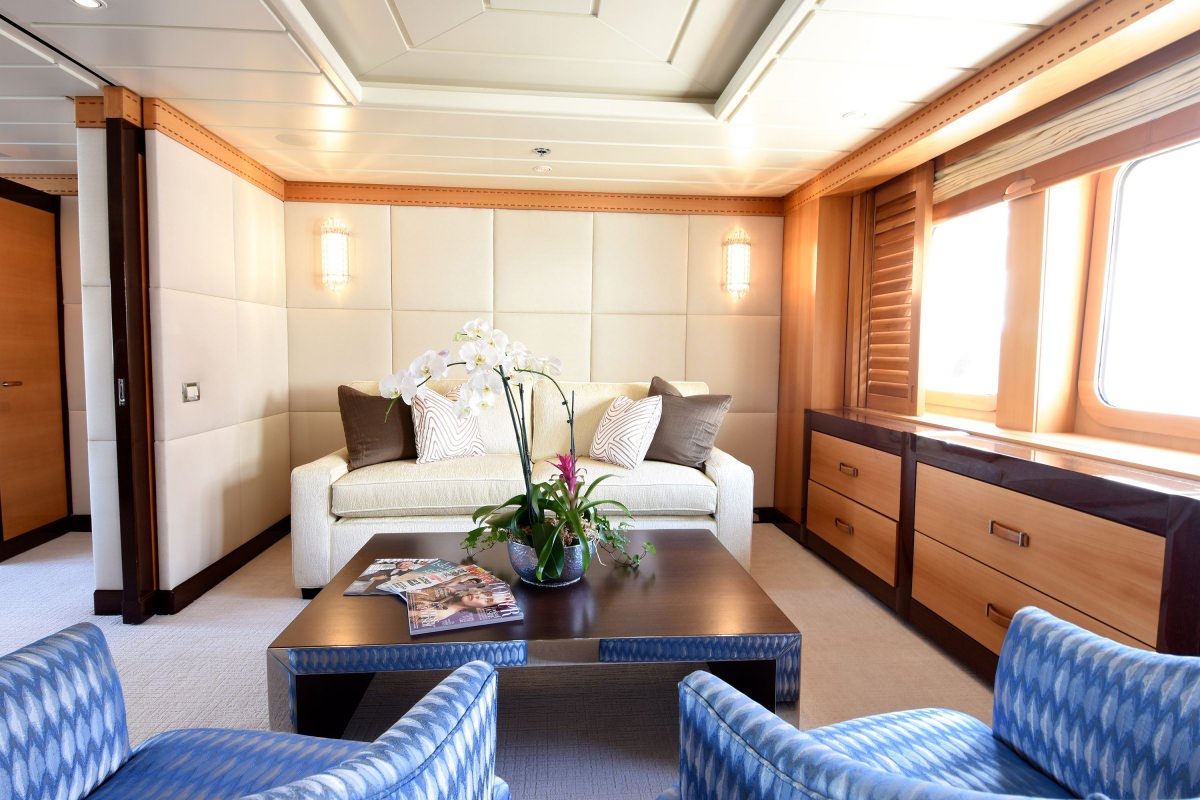 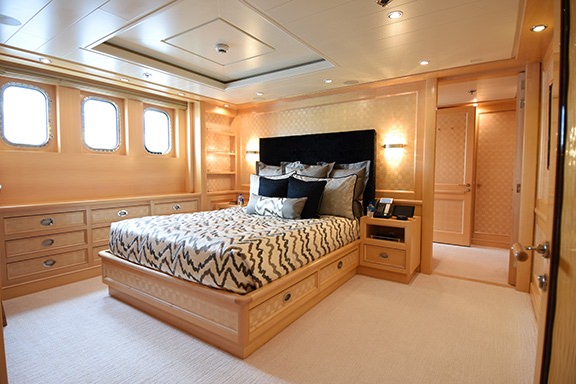 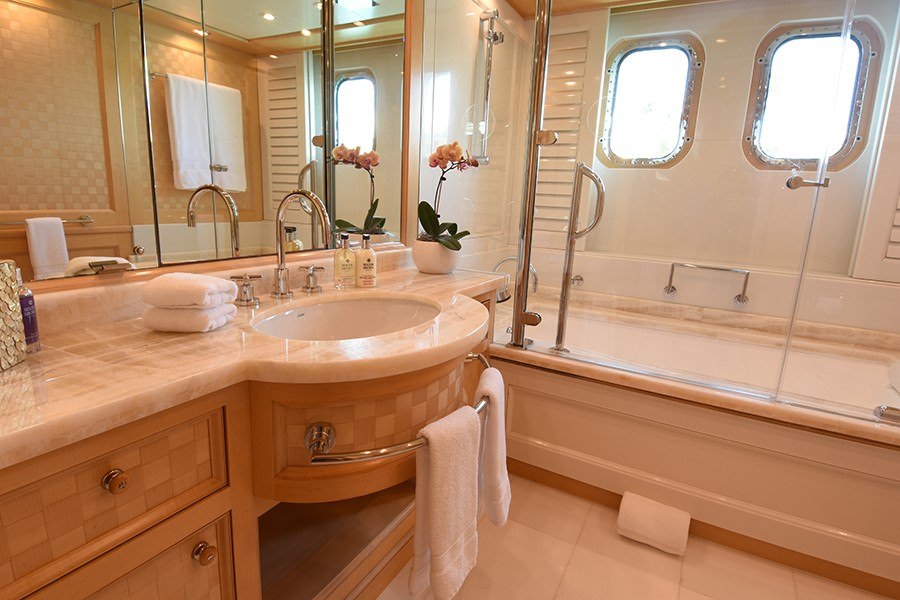 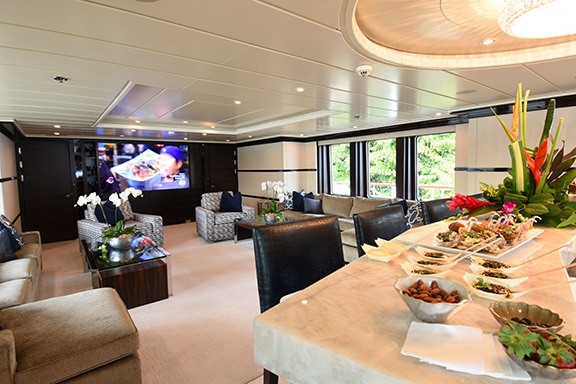 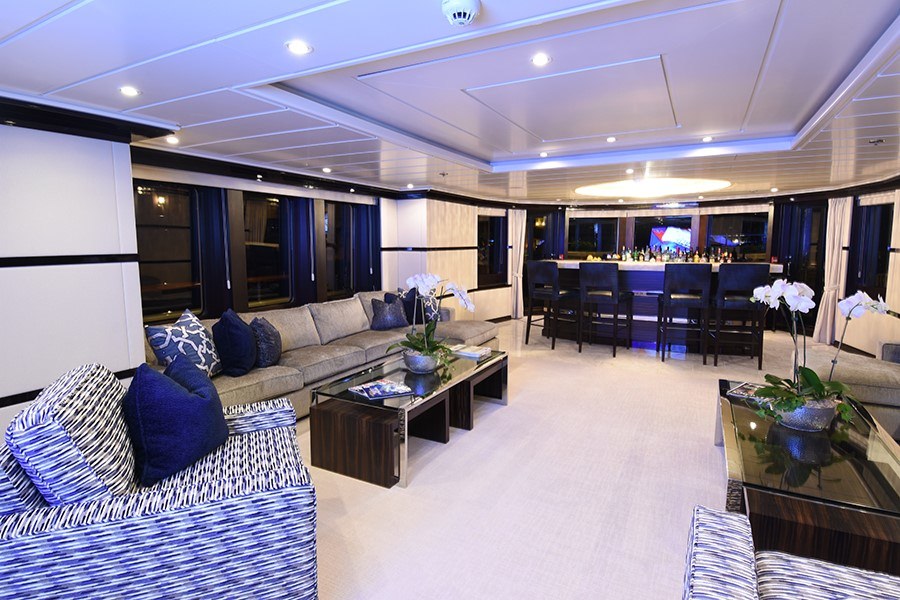 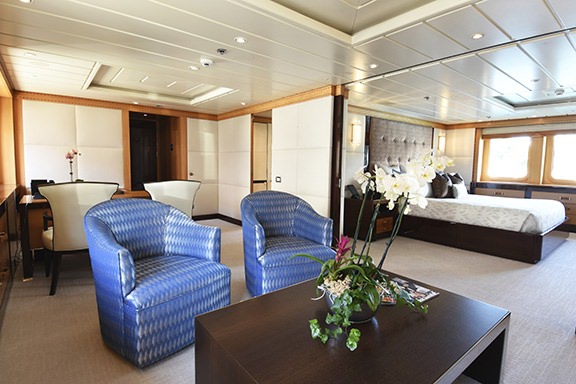 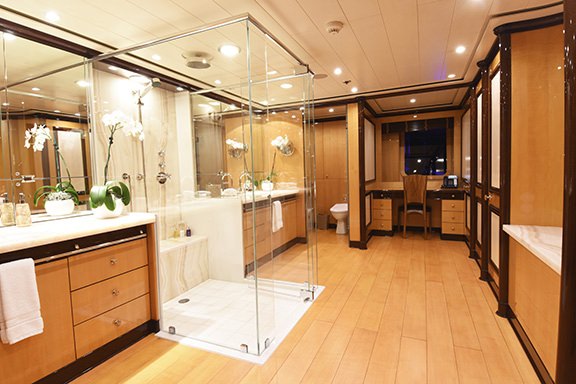 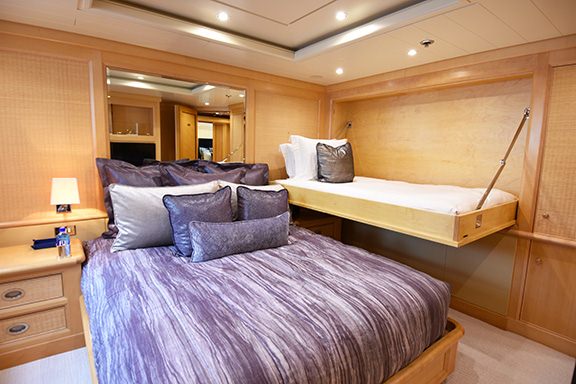 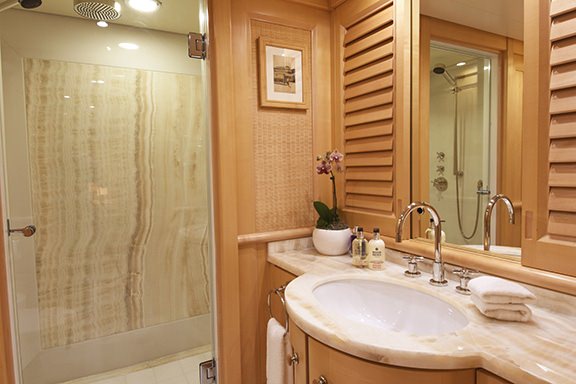 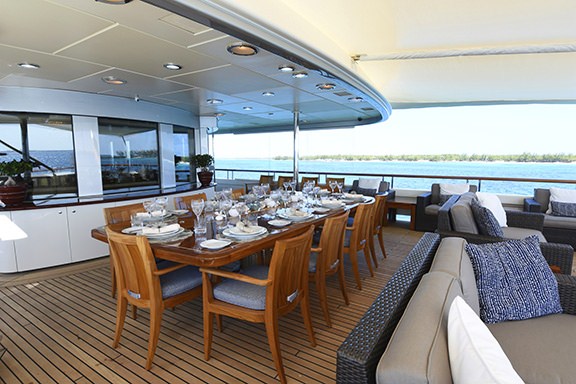 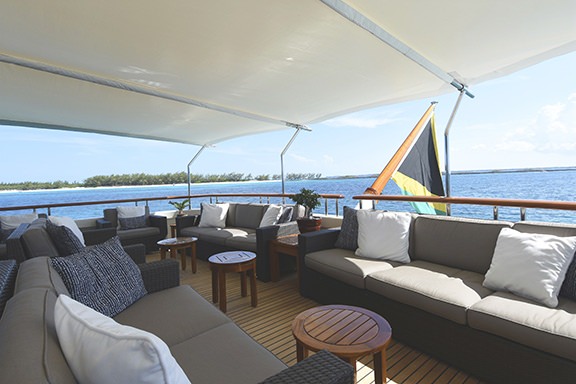 Crew Profile
CAPTAIN ǀ Brian Muston
With over 25 years of time at sea and uncountable nautical miles cruised, Brian is an extremely experienced and knowledgeable captain. He originally hails from South Africa and spent his childhood living on a sail boat in St. Maarten with his family. From there it was a natural progression to transition into a lifelong career on the water, starting as a surf instructor and moving on to captaining boats. He has cruised the waters of the Mediterranean, Caribbean and Bahamas extensively. He has a true passion for this life and goes above and beyond to make all charters aboard Nita K II a success.

FIRST OFFICER ǀ Leigh Love
Leigh grew up in and around the ocean in a small coastal town in South Africa called Knysna. She was involved in different sports representing her school in golf, squash and field hockey, along with playing provincial field hockey for her state. Leigh was blessed to have fantastic parents who always encouraged her to follow her dreams and strive for the best. When she was 21 she moved to Cape Town where she studied tourism and qualified as the youngest Tour Guide in South Africa. She always loved traveling and meeting new people, so yachting seemed like the perfect job. She has been in the industry for 16 years working her way up the ladder and recently completed her 3000 ton Masters license. She has worked on high profile charter vessels including M/Y Dream (60m), M/Y Remember When (50m) and M/Y Nero (90m).

SECOND OFFICER ǀ Greg Love
Greg grew up on the southeast Queensland coast of Australia. His hobbies included camping and sport/game fishing in which he held state and national records as a junior. He entered the yachting industry in 2003. His cruising itinerary over the last 15 years includes Alaska, British Columbia, Mexico, Caribbean, Bahamas, the East coast of USA and as far north as the Saint Laurence River in Canada. Greg brings great leadership and experience to the deck department aboard NITA K II and this experience translates to a safer and more reliable trip for charter guests.

HEAD CHEF ǀ Jeff Kent
Jeff started his culinary career in the kitchens of the world-famous Cog Railway, located on Mt. Washington in New Hampshire, where his father was a Steam Locomotive Engineer. After many years working in some of America’s finest restaurants with some of the country’s most talented Chefs, Jeff discovered the yachting world. Today when Jeff has a bit of free time he loves to immerse himself in the local culture of the various ports and countries around the Mediterranean and Caribbean. By exploring the markets, restaurants and vineyards that each area has to offer, Jeff is able to bring a little of the best of each back aboard the yacht for his guests.

SOUS CHEF ǀ Liezl Wehmeyer
Liezl grew up in a beautiful small beach town on the Southeast coast of South Africa, Jeffrey’s Bay, and has absolutely loved and respected the ocean since a very young age. She started working in the hospitality industry directly upon studying a Tourism and Hospitality Course after graduating high school. She lived and worked on a 5-star Golf Country Club in Boca Raton in sunny Florida. After returning to the vineyards of Stellenbosch, Cape Town, she became a Guest House manager for a several years. Having been bit by the travel bug on her previous travels abroad she took an opportunity in 2012 to crew on a 39ft sailing Catamaran which was setting sail from Cape Town, South Africa to Tahiti. This was a wonderful experience in so many ways and she learned so much on this trip. She has been working in the yachting industry ever since.

CHIEF STEWARDESS ǀ Sarah Pitchford
Originating from the City of Gold, Johannesburg South Africa, Sarah joined the yachting industry 8 years ago. Passionate about the ocean, her career move to the yachting industry was a natural fit. She studied Brand Building and Management at the Vega School of Leadership and is also a qualified lifeguard. Sarah is an absolute foodie and fitness fanatic at heart. In her free time you’ll find Sarah scuba diving, attending fitness and yoga classes or participating in various outdoor adventures. She also loves to cook, capture moments through photography and experiment through mixology. Sarah has a very positive outlook in everything she does and works hard to ensure that everything is done to the highest level. With an ability to communicate well with guests, she is a great asset to have aboard. Everyone who visits Nita K II feels immediately at ease around her. Sarah looks forward to welcoming you onboard.

STEWARDESS ǀ Lauren Moody
Lauren was born in the south of France to British parents and then moved to a small town in the heart of Yorkshire, Northern England at a young age. Lauren originally trained as a flight attendant and flew internationally for five years, two of which while living in Alicante, Spain. Having seen much of Europe through airplane windows she decided to take a year long career break and travel across Southeast Asia and the US volunteering with various organizations along the way. During her travels Lauren met other yachting professionals who ignited her interest into the industry. So she embarked on a journey to Antibes where she met and joined NITA K II. Since joining she has visited many places she once only saw from above. In her free time Lauren enjoys traveling, immersing herself in the local cultures and cuisine along with spending time outdoors hiking, swimming and soaking up the sun.

STEWARDESS ǀ Chloe Leo
Chloe was born in Johannesburg, South Africa, and lived there for 12 years before relocating to Cape Town. She attended Rhodes University on the east coast of South Africa where she obtained a Bachelor of Science in Economics and graduated with Honors in Human Kinetics and Ergonomics. After obtaining her personal training certificate, Chloe took part in most sports at her University, focusing competitively on athletics, cycling and hockey while assisting in training and competing in CrossFit. Chloe's love for anything water related began with family holidays down the coast where her and her sisters would wakeboard, waterski, surf and kayak daily. Chloe's brother-in-law, who is a yacht chef, introduced her to the industry of yachting when he sensed her passion for adventure.

STEWARDESS ǀ Julia Pitchford
Julia was born and raised in Johannesburg, South Africa and later moved to Edinburgh, Scotland to pursue her studies in nursing at Queen Margaret University. Julia’s nursing knowledge and expertise ensures that guests receive the best possible care and provides an additional level of medical contingency onboard with the assistance of MedAire (the yacht’s direct line to doctors, security experts, multilingual coordinators and logistics personnel 24/7/365). When the opportunity to work with her older sister (Chief Stewardess Sarah Pitchford) presented itself she quickly and literally jumped aboard. As an avid sportsman and a proud South African, Julia competed internationally in Equestrian Vaulting over a period of 10 years. She also recently joined the QMU Sapphires cheer squad participating in competitions throughout the UK. When Julia is not working she enjoys visiting new places, exercising and tasting local foods.

CHIEF ENGINEER ǀ Clement Golaz
Clement was born in France 33 years ago and currently lives on the Caribbean island of Guadeloupe when not traveling on yachts. He has a very experienced Merchant Marine background, including ferry boats in both the Mediterranean and Caribbean. He is also a sport fishing expert as well as a freelance captain and mate on boats in some of the most magnificent places on Earth.

SECOND ENGINEER ǀ Stephen Hogg
Stephen is a proud South African from a small town known as Kokstad. As a young boy Stephen always showed a great interest in machinery and how it worked. This led him to study and later qualify as an electrical Engineer. He joined the yachting industry 4 years ago and has been responsible for the upkeep of the vessel’s exterior, as well as assisting with the maintenance of onboard systems. He enjoys, fishing, cooking, free diving and traveling. Stephen has a contagious sense of humor and makes for a great contribution to the team’s morale.

DECKHAND ǀ Keagan Schiff
Keagan originates from the heart of South Africa. Having spent most of his years growing up in Johannesburg he found his passion while studying in Cape Town. Living in the creative hub, he pursued a Bachelor of Arts degree in Creative Brand Communications through Vega University. During his time in Cape Town he furthered his studies by completing a Diploma in Event Management and Graphic Design. He gained hospitalities experience working as a personal assistant for an events and promotion company and also worked his magic as a bartender for high end functions at private events. He always had a massive passion for the ocean and believed that it would be a great opportunity to purse this adventure through yachting. He always had an active interest in all sports and was constantly involved in multiple team sports were he represented the province in both rugby and water polo at a young age. His hobbies include traveling, wake boarding, scuba diving, hiking and design. Keagan understands the value of team work and is always keen to learn something new.

DECKHAND/THIRD ENGINEER ǀ Jacques Coetzee
Jacques was born just outside of Cape Town in Durbanville. His love for the ocean began in a town called Groot Brak where he and his three brothers used to fish and surf during the holidays. His avid passion for fitness and health brings a good dynamic to Nita K II with most crew having a common interest in overall health and wellbeing. He has competed in rugby, tennis and golf previously and aims to expand his abilities in boxing. He studied for five years in engineering at Stellenbosch University in South Africa and graduated with Honors in Mechanical Engineering. Jacques made the decision to join yachting while he was still a student as his primary goal is to work his way towards chief engineer in the industry. His previous experience includes time on sailboats, as sole engineer, and in the deck department.